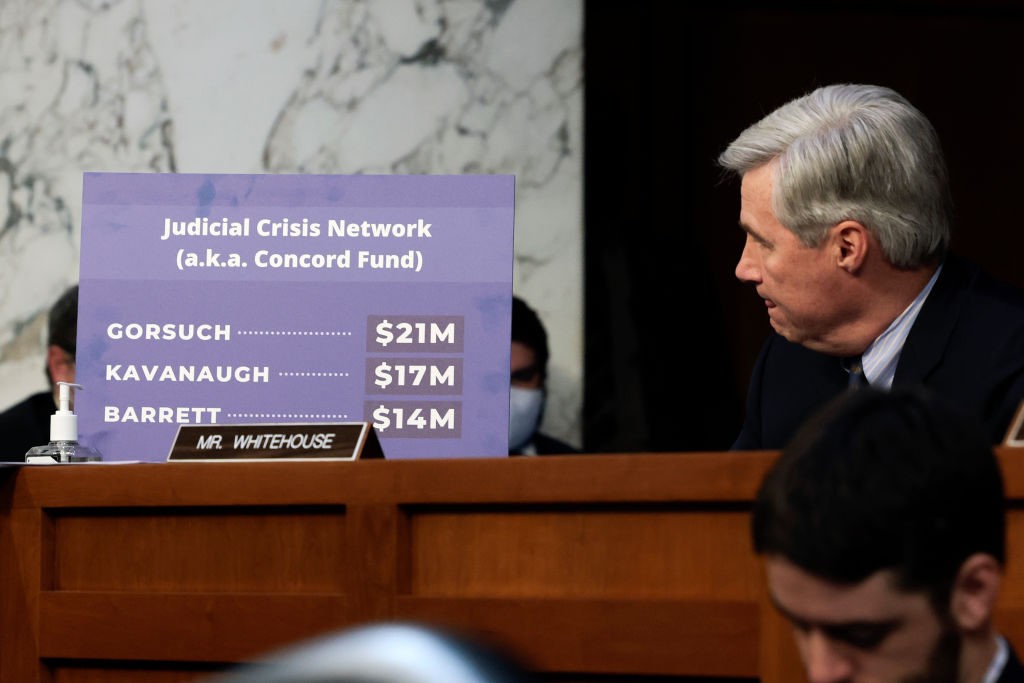 Whitehouse spent more than ten minutes during the Senate Judiciary Committee’s confirmation hearing for Jackson attempting to differentiate between “a dark money interest rooting for” a particular Supreme Court nominee and “right-wing dark money interests having a role in actually picking” nominees.

Dark money, a term Whitehouse mentioned a dozen times during his remarks, refers to political funding that cannot be traced back to specific donors.

Dark money organizations predominately include 501(c) groups, which, as Open Secrets details, are not required to disclose their donors’ names or other sources of money. Some 501(c) groups can therefore donate to political candidates or causes without the public knowing who is behind the funding of the groups.

Whitehouse, who himself is a beneficiary of dark money, began by saying, “I’ll be the first to concede that there is dark money on both sides, and I hope very much we can get rid of it on both sides shortly by legislation.”

The Rhode Island Democrat added, “But there is a difference, I believe, between a dark money interest rooting for someone and right-wing dark money interests having a role in actually picking the last three Supreme Court justices.”

Whitehouse explained with a diagram how he believed the groups were all linked, saying, “I showed this all because it shows considerable effort when somebody goes to that much trouble to create that many organizations to hide how much money they’ve spent to control the nomination process to the court.”

Whitehouse then suggested that dollar amount — presumably to “control the nomination process to the court” — was $400 million.

To reach that number, Whitehouse first referenced a Washington Post report that found conservative-aligned nonprofits raised $250 million from 2014 to 2017 to help “promote conservative judges and causes,” per the Post report. Two of Trump’s three Supreme Court picks had not yet been nominated during that timeframe. Whitehouse then said “further research led to testimony” in the Judiciary Committee’s subcommittee on federal courts, of which he is chairman, “that the number was actually $400 million.”

During his dark money presentation, Whitehouse did not mention Demand Justice, a Democrat-aligned dark money group with a projected multimillion-dollar budget in 2022. Demand Justice announced a $1 million ad campaign to promote Jackson in the immediate aftermath of her nomination. It had also previously included Jackson on its shortlist of desired justices, even as early as just prior to the late Justice Ruth Bader Ginsburg’s death in September 2020, according to The 19th. Demand Justice also heavily lobbied for retiring Justice Stephen Breyer to step down.

Whitehouse said he was prompted to discuss dark money on Tuesday after Republicans, including former Judiciary chair Sen. Lindsey Graham, broached the topic a day earlier during committee members’ opening statements on Jackson.