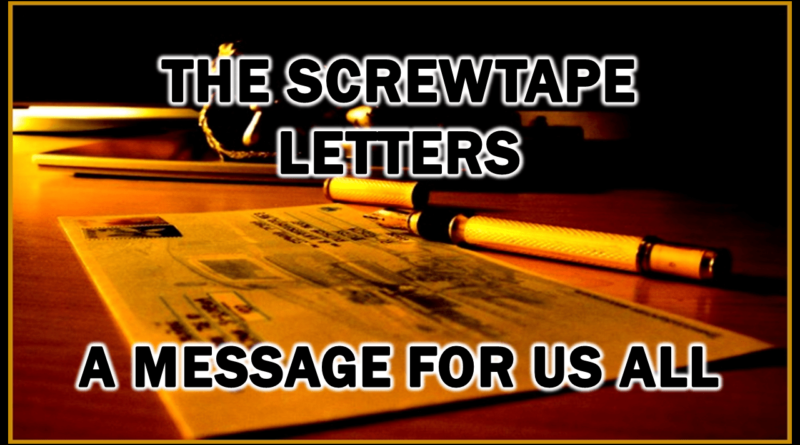 There can be little doubt in anyone’s mind that for the past two years we have been living through unprecedented revelation of the evil that has permeated sections of our societies and many of us have realised the real battle is between good and evil.

The likes of Klaus Schwab, and many others who follow his lead, are making all sorts of deals with the devil.  The Screwtape Letters provides warning to those who strive for or support evil while at the same time encouraging those who strive for good – the devil devours his own, once he has had his way with them, he disposes of them with callous and casual indifference.

The Screwtape Letters, a book by C.S. Lewis published in 1942, is constructed as a collection of letters from one devil to another, Screwtape and Wormwood, concerning the corruption of a human soul. While Screwtape repeatedly tells Wormwood to avoid talking about specific historical events of any kind, it is clear that the patient is living in England during World War II.

In one sense, the “antagonist” in the book is God, whom Screwtape calls “the Enemy.” From the perspective of the reader (who presumably sympathises with good, not evil), the antagonists are Satan, Screwtape, and Wormwood, the devils who try to corrupt the patient’s soul.

Fear is a liar:

“We want him to be in the maximum uncertainty, so that his mind will be filled with contradictory pictures of the future, every one of which arouses hope or fear. There is nothing like suspense and anxiety for barricading a human’s mind against the Enemy [God]. He wants men to be concerned with what they do; our business is to keep them thinking about what will happen to them.” – The Screwtape Letters by C.S. Lewis

The Devil is subtle and cunning:

“Our policy, for the moment, is to conceal ourselves…I do not think you will have much difficulty in keeping the patient in the dark. The fact that ‘devils’ are predominately comic figures in the modern imagination will help you. If any faint suspicion of your existence begins to arise in his mind, suggest to him a picture of something in red tights, and persuade him that since he cannot believe in that (it is an old textbook method of confusing them) he therefore cannot believe in you.” – The Screwtape Letters by C.S. Lewis

The novel consists of 31 letters written by a devil named Screwtape to his nephew, a young devil named Wormwood. The author, C.S. Lewis, notes that he has no intention of explaining how he came to acquire these letters.

Wormwood reports to Screwtape that a war (World War II) has broken out in Europe, prompting Screwtape to send Wormwood a series of letters on fear, violence, and bravery. Screwtape explains that war can be good or bad for the devils’ cause. It’s good in the sense that it fills people with fear and makes them turn to sin and sensual pleasure, but it’s also bad because it encourages people to think seriously about death, and therefore behave morally. Screwtape explains to Wormwood that whether the patient becomes a patriot or a pacifist, if he is extreme in his beliefs then his behaviour will be sinful—extremism of any kind, except extremism for God, is a sin.

Wormwood writes to Screwtape, proud that the patient is “losing his religion.” Screwtape angrily reminds Wormwood that people are always moving between periods of depression and disappointment and periods of happiness—unfortunately, periods of depression are actually good for God, because if people can continue to worship God during this time, then it makes them nearly impossible to corrupt in the future. Screwtape adds, grudgingly, that God loves humanity and wants them to be rewarded for their virtue in Heaven. He also notes that modern European society has an irrational prejudice in favour of the new and of fashion—this encourages people to abandon Christianity simply because it’s old-fashioned, a great help to devils.

Screwtape learns that the patient has befriended a married couple that regularly mocks Christianity and celebrates the importance of progress. Screwtape tells Wormwood to use this development to his advantage: he should encourage the patient to spend more time with the couple, until the couple’s beliefs gradually become his own. Screwtape warns Wormwood that although he is successfully corrupting the patient, he must be careful not to corrupt him too quickly, for fear that the patient will realise that he is sinning and return to the church.

In his next letter, Screwtape reveals that Wormwood has failed to corrupt the patient—in fact, he has allowed the patient to return to the church. Wormwood allowed this to happen, Screwtape angrily explains, by letting the patient experience pleasure. Pleasure, Screwtape shows, is always dangerous for devils, since God is its creator. While some kinds of pleasure can be sinful, it’s only sinful because of the quantity of pleasure being demanded.

There is a lull in the war in Europe, filling the patient with fear and anxiety. During this lull, Screwtape addresses a wide variety of questions Wormwood has raised about humanity, virtue, and sin. Screwtape notes that humans corrupt themselves when they become “connoisseurs” of churches, and also notes with amusement that the Church of England has torn itself apart with hundreds of petty debates. He makes a thorough study of gluttony, concluding that it is just as gluttonous to fuss over small portions as it is to insist on large portions. Finally, Screwtape writes Wormwood a series of letters on the difference between love and lust, concluding that a weakness of modern European society is that is conflates these two things. As a result, millions of young couples marry out of lust, or, even worse, out of the mistaken belief that love is the only reason to marry someone. In reality, Screwtape writes, a marriage requires loyalty, respect, and hundreds of other virtues to work properly. Screwtape expresses his exasperation with the principle of love, noting that the goal of all beings is to fight and compete with other beings.

Wormwood writes Screwtape a letter in which he points out a contradiction in Screwtape’s reasoning—if God loves humanity, then how can it be true that the goal of all beings is to fight with other beings? Screwtape revises his own opinion, worriedly begging Wormwood not to show his letters to the “Secret Police,” which is responsible for punishing devils who commit heresy. Screwtape explains that God does not love humanity—on the contrary, his love for humanity is only a smokescreen to disguise his true, mysterious plan—a plan that no devil has ever understood.

In the following letter, Screwtape illustrates the fallacy in the patient’s belief that he is entitled to “free time.” On the contrary, the patient owes everything to God—his talent, his intellect, his body, and his time. Thus, it is sheer foolishness to suppose that one “deserves” anything at all. Screwtape speculates that God wants humans to reach the point where they can be aware of their talents and abilities, and yet also be fully aware that they owe everything to God.

Now that the patient is with his lover, and is meeting her educated, Christian family, Screwtape advises Wormwood to appeal to the patient’s vanity and desire for the new. Modern humans, he explains, have an irrational desire for new things and fashions—this desire is ridiculous, he concludes, because new things aren’t inherently good or bad. When the patient begins courting his lover, Screwtape advises Wormwood to make the young couple think of love and nothing else. In this way, Screwtape explains, they will sacrifice their own happiness for one another’s sake, meaning that in the future, they will come to resent each other.

The war commences, and the patient is shipped off to fulfil his “duties.” Screwtape warns Wormwood that the patient could die in a state of virtue, before Wormwood has a chance to corrupt him. In general, he notes, humans are too afraid of death and too fond of life. Life and experience are good for devils, because over time, people begin to despair and become more prone to sin. Ironically, civilisation values people who have had long lives and many experiences.

In his final letter to Wormwood, Screwtape greets Wormwood with false warmth and explains that the patient has died in an air raid. In his final moments of life, the patient “saw God,” and realised that no evil could ever corrupt him. Screwtape admits that he has no idea what God is trying to accomplish by loving humanity, and that he doesn’t know what awaits the patient in Heaven. He even expresses his desire to learn what lies in Heaven. Screwtape reminds Wormwood that he feels “the same love” for Wormwood that Wormwood feels for Screwtape. In the end, he reminds Wormwood that the penalty for failing to corrupt a human is being eaten alive—and Screwtape himself will be the devil to eat Wormwood.

March 23, 2022Why We Should Not Trust This Drug Company – Remain Sceptical

March 23, 2022Government of Canada data shows the Triple Vaccinated are over 5x more likely to die of Covid-19 than the Unvaccinated 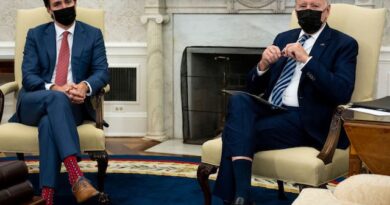 Joe Biden: Food Shortages ‘Going to Be Real’ Due to Russia-Ukraine War