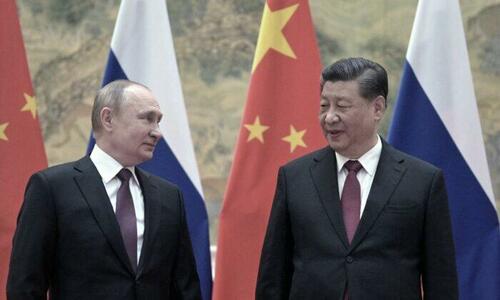 Authored by Frank Fang via The Epoch Times (emphasis ours),

Meanwhile, China imported a total of 12.67 million tons of crude oil from Russia in the first two months of this year, according to China’s customs data.

China’s continued energy purchases from Russia are providing important revenue for Moscow, as its energy sector has become increasingly isolated after being hit with sanctions and other retaliatory moves over its aggression in Ukraine.

On March 15, the European Union announced another package of sanctions against Moscow, among which is a ban on new investments in the Russian energy sector. Additionally, the bloc introduced a comprehensive export restriction on equipment, technology, and services for the energy industry.

China, however, has criticized sanctions imposed by Western countries. During a daily briefing on March 2, Wang Wenbin, one of China’s foreign ministry spokespersons, said Beijing and Moscow “will continue to conduct normal trade cooperation.”

Some U.S. lawmakers are calling for secondary sanctions against Russia, including Sen. Pat Toomey (R-Pa.), ranking member of the Senate Banking Committee.

“To cut off Mr. Putin’s oil and gas sales globally, the administration and Congress should impose secondary sanctions on the entirety of Russia’s financial sector,” Toomey wrote in an op-ed published on March 21 in The Wall Street Journal.

He added, “These penalties would effectively prohibit foreign banks anywhere in the world, under the threat of U.S. sanctions, from making payments to Russian banks, including for oil and gas.”

“Secondary sanctions would seal off #Russia from the rest of the world, prohibiting foreign banks, like those in #China, from doing business with #Putin & inadvertently funding the #UkraineWar,” Risch wrote. “This is the next step the Biden Admin must take.”

Beijing’s effort to cast itself as a neutral party has drawn criticism. On March 15, NATO Secretary General Jens Stoltenberg called on Beijing to condemn Russia over what he called Moscow’s “brutal invasion” of Ukraine.

Andriy Yermak, head of the office of Ukraine’s President Volodymyr Zelensky, said on March 22 that China should play a more “noticeable role” in ending the war, during a virtual news conference organized by London-based think tank Chatham House.

“So far we’ve seen China’s neutral position. And, as I said before, we believe that China … should play a more noticeable role in bringing this war to [an] end and in building up a new global security system,” Yermak said.

Weeks before the war, Beijing and Moscow updated their bilateral relationship to a “no-limits” partnership, following a meeting between Russian President Vladimir Putin and Chinese leader Xi Jinping. The two leaders also said there would be “no ‘forbidden’ areas of cooperation” between their nations.

Reuters contributed to this article.

Shades Of Gray In The Russia-Ukraine War

Israel intensifies its occupation of the Palestinian West Bank