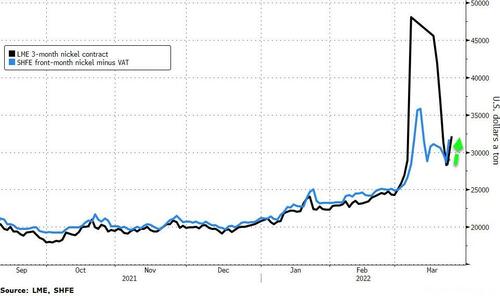 After five straight limit-down days, following its reopening, LME Nickel futures are limit-up this morning, soaring 15% after catching down to SHFE’s equivalent price.

Bloomberg reports that trading started slowly on Wednesday but gained pace as prices spiked toward the limit, with more than 2,600 contracts changing hands by 10:25 a.m. While Tsingshan has struck a deal with its banks to avoid further margin calls, there are still a large number of bearish bets in the market that need to be unwound – and at a time when fears over supply are growing.

It is now down about 70% from the record high, but still up more than 30% from the start of the month.

Notably, the chaos and rule-changes continue at the LME as it says that the second ring session (which traded limit-up) will be deemed “a disrupted session” and all agreed trades during this session will be null-and-void.

Additionally, the most-active nickel futures contract traded on the Shanghai Futures Exchange rose as much as 11% at the start of Wednesday’s night session after LME’s limit-up bounce.

Prices are now broadly in line with nickel contracts on the Shanghai Futures Exchange which suffered less of a technical squeeze than the higher open interest-burdened LME.

LME CEO Matthew Chamberlain says “the Shanghai price is a good guide” as he discusses a normalization of the nickel market.

Cuban Cancer Patient Arrested for Illegal T-Shirt: 'They Hit Me So Much I Got to Prison Defecating'