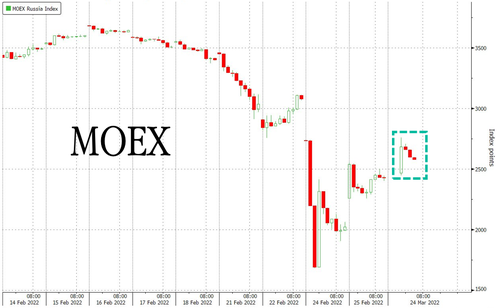 After a record-long stock trading halt that was instituted on Feb. 28, days after the Ukrainian invasion, Russia has reopened the stock market with ample support from the government, according to Bloomberg.

For a shortened four-hour trading session, the Moscow Exchange exchange resumed trading in 33 most liquid Russian equities, including some of the biggest companies such as Gazprom PJSC and Sberbank PJSC. The MOEX Russia Index closed up nearly 4.5%.

Before the trading halt, MOEX plunged 30%, the most significant daily decline since Russia defaulted on its debt and devalued the ruble in 1998.

Russia banned short-selling and placed restrictions on foreign traders trying to exit their positions. Moscow has taken a page from Washington’s (and Beijing’s) playbook and unleashed its own version of the ‘plunge protection team‘ with its wealth fund purchasing up to $10 billion in equities today.

Some of the biggest advancers were oil company Lukoil PJSC and gas giant Gazprom PJSC, while Aeroflot PJSC declined along with Mobile TeleSystems PJSC. Other oil majors also jumped as Brent oil traded over $121 a barrel due to tight supplies.

The sanctioned lender VTB Bank PJSC plunged as much as 21% before clawing back losses to close down 5.4%. Sberbank PJSC closed higher despite its CEO Herman Gref being sanctioned by the U.K. today.

Per Hammarlund, chief emerging markets strategist at SEB AB in Stockholm, said the intervention by Russia in equity markets today isn’t producing “a very convincing floor at the moment, because the increase today is very much likely driven by the authorities buying stocks.”

“It will take quite a while before they will be able to unload these positions, and it’s going to be at bargain basement prices,” Hammarlund said.

“With restrictions on foreign selling and repatriation this is not a functional market in terms of efficient price discovery, given foreigners dominate the market’s free float,” said Hasnain Malik, a strategist at Tellimer in Dubai.

In FX markets, the ruble had its largest gain since 2014 on Wednesday following President Vladimir Putin’s move to demand “unfriendly countries” to swap energy products for rubles.

“The one fundamental factor that has improved during the stock market’s suspension is the partial recovery in the currency as Russia tries to shift oil and gas trade to rubles,” Malik said.

The White House commented on Russian markets opening by calling it a “Potemkin market opening.” Potemkin is a term that signifies any deceptive or false construct. 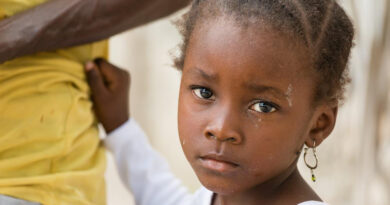 WATCH “Infertility: A Diabolical Agenda” for FREE at Brighteon.com