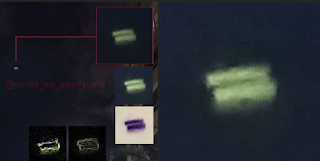 An alleged flying object was photographed by chance on the evening of 18 January 2022 from the vicinity of the Caribe Sector, near the mountains, in the Carballeda Parish of the state of La Guaira, formerly known as Vargas, on the Central Venezuelan Littoral facing the Caribbean Sea.

Milagros Domínguez, a 42-year-old geographer, unexpectedly captured the UFO fly-over at 10:04 PM, according to the EXIF metadata on the image. Still startled 24 hours after the event, she said that when she took the photo, she saw nothing unusual in the skies, which was clear at the time.

“I took the dog downstairs for a walk and found that there was a majestic and lovely moon. That’s what caught my attention, and that’s why I took several photos. I then went up to the apartment, and upon going through the pictures on the phone, I noticed that thing was there,” she explained.

The alleged artifact is greenish in color and seems to be made up by two tubular structures, which appear in the 6 photos taken by Dominguez from the same location. It leads one to think that the object remained in motion, invisible to her eyes, but not to the camera lens.

According to the author of these images, it is not the first time that a similar phenomenon has been associated with this location. “One night, about a year ago, I was also in the garden, speaking to the caretaker, and we suddenly saw a large object with white lights, moving in a zig-zag pattern, something that an airliner obviously cannot do,” she said.

On December 31, 2012, several surfers saw and photographed two elongated objects that moved slowly and in single file over the sea.

[Translation © 2022 S. Corrales, IHU with thanks to Héctor Escalante, OVNIVENEZUELA]

The Annual Unshackler Awards: 2021 Fake News Of The Year Award 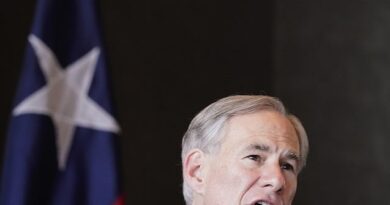 Abbott on Psaki Avoiding Blame for Guardsman’s Death: We Have to Have the Guard on the Border Because of Biden