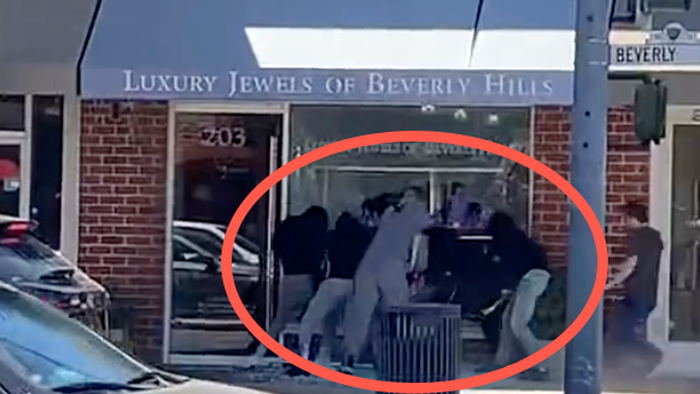 After a series of high-profile ‘smash and grabs’ by organized retail crime in San Francisco’s Union Square and wealthy suburbia Walnut Creek retailers last year, the latest was caught on video in Beverly Hills.

On Tuesday afternoon, brazen smash and grab thieves hit a Beverly Hills jewelry store and stole a whopping “$3-5 million in stolen watches and necklaces,” tweeted NBC Los Angeles’ Robert Kovacik. Accompanying the tweet was a video of the robbers smashing the street-facing window of the Luxury Jewels of Beverly Hills shop.

#BREAKING #BeverlyHills: Owner of Luxury Jewels of Beverly Hills tells me the smash and grabbers got away with 3 to 5 million in stolen watches and necklaces pic.twitter.com/3W4zsaVXjX

The smash and grab occurred in the middle of the day. Local news KTLA said police received multiple calls about the robbery around 1345 local time. Bystanders watched in disbelief as five people used what appeared to be hammers to break the jewelry shop window.

Peter Sedghi, the store’s owner, said he was in his office when he heard the sound of smashing windows.

“It literally sounded like gunshots, so I told my staff, I yelled out, ‘everyone down on the floor,'” Sedghi said.

The retail industry has been decimated by the wave of smash and grabs in the liberal state, where progressive lawmakers have downgraded retail theft from a felony to a misdemeanor (via Proposition 47). Even with tens of millions of dollars of retail thefts in the last year, state lawmakers still don’t have a plan to address the crime wave.

Earlier this month, state Republicans failed to repeal Proposition 47 after an hour of debate and testimony. It looks like the smash and grab wave will continue this year.

Marsha Blackburn on 'Red-Handed': 'More and More Democrats Being Connected' to CCP

Republicans Respond to ‘Worst’ SOTU in the ‘History of Our Nation’

Masks on Planes to Become Permanent Like Anti-Terror Rules