We are heading straight for the biggest recession most people can remember.

If you were born after 1930 then you are about to experience your first world class recession.

The difference between the one that is coming and all the ones that preceded it is that this one isn’t happening by accident.

The recession you are about to endure is no mistake; it was conceived, planned and orchestrated by the billionaire conspirators, it will last for years and it will usher in the Great Reset and the New World Order.

Once the recession is properly under way the game will be over, the war will be lost and the conspirators will have won.

(They’ve been calling me a ‘conspiracy theorist’ for years so it gives me a little light amusement to call them the conspirators. When a bunch of billionaires and assorted evil bastards conspire to take over the world, it seems fair enough to describe them as conspirators.)

The recession was guaranteed and triggered when company bosses were pressured by tiny groups of lobbyists to plan their businesses around ESG nonsenses.

ESG, in case you’ve been asleep for a while, stands for ‘environmental, social and governance’ regulations. Today companies are pretty well forced to put these issues way above finding employment for staff, satisfying customers and making a profit for shareholders.

Then the covid fraud really moved things along nicely for the billionaire conspirators.

In 2020 alone, the world’s workers lost $3.7 trillion in earnings with the self-employed and small business owners suffering most and public employees suffering very little if at all.

The elderly were also particularly badly damaged, in every respect, by the covid fraud – the biggest fraud in history. And, let us not forget, there are still people around who are so terrified by the thought of what they regard as the ‘plague’ that they have not left their homes for two years.

Then they manipulated a war scenario: a real ‘Wag the Dog’ war.

And the recession began in earnest.

The economic crash was carefully designed to wreck the economy while sustaining an ever enlarging State bureaucracy.

House prices have for decades been allowed to soar for this moment. There will now be mass bankruptcies – entirely according to plan. Inflation is heading into double figures around the Western world. We are all Argentina and Venezuela now.

Half-witted, retarded greens and climate change nutters, who have ventured further into the world of pseudoscience than I would have thought possible, believe that the coming recession will save us all. The idiots whose hobby is gluing themselves to motorways think that our use of fossil fuels and fertilisers means that seven billion people are going to have to crowd together on the top of Mount Everest to survive. They are now welcoming the recession because it will mean less travel, less heating and less hot food – especially for the world’s poor.

And so they’re taking opportunity of a war to lead us into net zero and global genocide.

The mad climate change nutters probably think they are caring people but they are cruel and ruthless and they don’t give a damn about anything other than their distorted, selfish ambitions. They are happy to let the end justify the means as long as the end means victory and power they will put up with a few hundred million Africans starving to death.

The startling fact is that left wing commentators excitedly supported and promoted the covid fraud and were delighted that millions of people in Africa descended into starvation territory.

The lefty liberals are thrilled by the genocide in Africa because they have been tricked into supporting the billionaire conspirators.

The mad lefties thought the covid world would take them straight towards a global government run by communists. They were wrong, of course. They’d been tricked. The world was heading straight for the New World Order planned by the Rothschilds, the Bilderbergers, the World Economic Forum and a bunch of miscellaneous psychopaths.

(The only countries in the world which didn’t descend into chaos were Tanzania and Sweden. Tanzania did not impose any covid-19 restrictions in 2020 and had no more deaths than usual. Sweden introduced very few restrictions, had lower mortality rates than anywhere else and was the first to recover from the consequences of the fraud. The mainstream media skilfully avoided mentioning these simple but inconvenient truths.)

Before the Russian invasion of Ukraine took place it was already possible to see the Great Reset beginning to develop – with money and power being concentrated in fewer and fewer hands, with State authority increasing and with cronyism and State inefficiency and theft of public money by politicians and civil servants rising dramatically.

Now things are getting worse by the second. Prices will soar. Jobs will disappear. The long-awaited housing crash will come.

And we are heading for the biggest recession anyone under 100 years of age can possibly remember.

Most people have no idea how awful the future is going to be.

You can help stop what is happening if you want to – simply by sharing the truth about the covid fraud, the climate change fraud and the war fraud with everyone you know. The conspirators can still be stopped.

But if you think I’m a mad conspiracy theorist you won’t do a damned thing to stop what’s coming.

When you’re homeless, cold and starving, and begging for a crust of bread you’ll look back and think: ‘Pity I didn’t listen to that Coleman. We could have avoided all this.’

Vernon Coleman’s first book about the Covid fraud was published in April 2020. It’s called Coming Apocalypse and it’s available as a paperback and an eBook on Amazon.

March 23, 2022Why We Should Not Trust This Drug Company – Remain Sceptical

March 23, 2022Government of Canada data shows the Triple Vaccinated are over 5x more likely to die of Covid-19 than the Unvaccinated

Every Elected Official in U.S. City of Hamtramck is Muslim 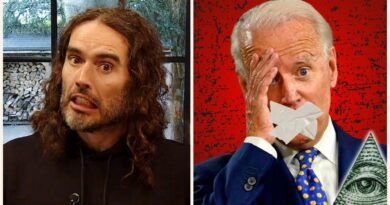 So this is the Endgame