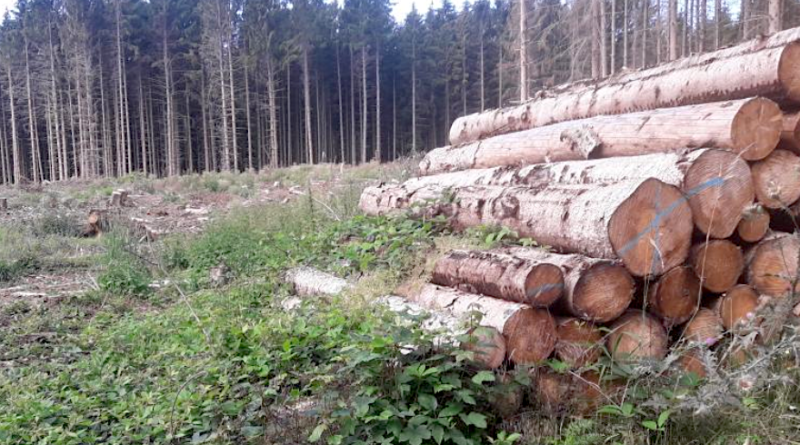 German environmental destruction: 200-meter tall industrial wind turbines less than 1000-meters from a residential area get approved, the forest gets cleared, popular hiking route gets converted into an access road.

The forest-clearing works for the expansion of the path network to the approved locations of the three wind turbines of the type Enercon E-138 EP 3 (height 199 meters/229 meters) has already begun.

Marcel Krombusch of the Westfalen Post reports here that the city of Hagen approved the construction of a second turbine, less than 1,000 meters away from a residential area!

Moreover, the third 199-meter tall turbine will be built in the popular hiking and recreation area in the future.

A photo appearing at the Westfalen Post here shows the massive forest clear-cutting that has been done to prepare for the construction of the wind turbines.

A popular hiking trail from the castle to Brechtefeld has been cleared in sections up to a width of ten meters, Krombusch writes.

Markos Piesche, Chairman of the citizens’ wind energy protest initiative “Against the wind Hagen”,  is surprised the 2nd turbine got approval from the city although the distance to residential development is not even 1000 meters.

Also surprising was an expert study by an acoustics expert on the turbines’ impacts on the neighboring residential area.

Surprisingly, the study examined the acoustic impacts on the residential area’s homes that were located the furthest from the wind park, and not those located closer.

“For this reason, the Hagen citizens’ initiative has joined the lawsuit filed by NABU NRW (Nature and Biodiversity Conservation Union of Germany), which has filed a species protection lawsuit against the three wind turbines on the heights around Hohenlimburg with the Münster Higher Administrative Court,” the Westfalen Post reported.

“In the opinion of the conservationists, the concerns of the red kite, which has been nesting and breeding not far from the location for years, as well as the black stork and the tree hawk, among others, were not sufficiently taken into account in the approval by the city.”

Andreas Welzel of the NABU environmental group makes it clear: “We are not opponents of wind power. Quite the opposite. We want regenerative energy. However, the turbines must be located in nature-compatible places.”

Unfortunately, the planners at the City of Hagen and the deep-pocketed wind-park investors have very different ideas. Cronyism at its finest.