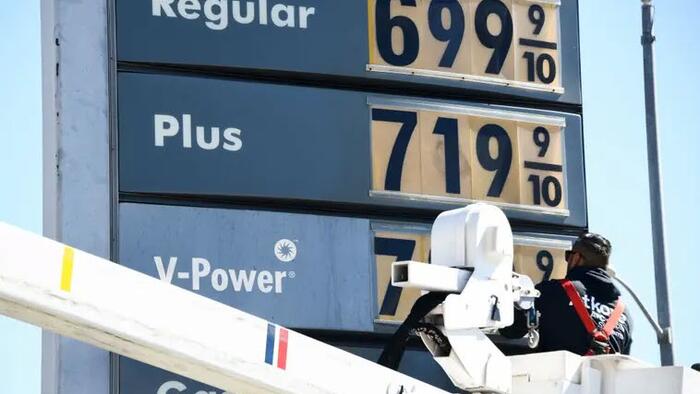 I have to repeat yet again that this is not just a war but an economic war, and not just a crisis but a metacrisis. As such, the latest attack from Moscow was always obvious to those expecting both sides to deliberately hurt the other while strengthening their own geostrategic position: using Russian energy as a weapon against Western sanctions.

Russia’s key Caspian oil pipeline is to be closed “for repairs” that will last two months, taking around 1mbpd out of circulation; but, eclipsing that, within a week Russia will demand payment in roubles for its gas from “hostile countries” – which means Europe.

Obviously, this is a breach of contract. Shock! Horror! Contracts might be broken! You think freezing FX reserves, sanctions, talking about naval blockades, proposing the introduction of letters of marque allowing privateers to seize Russian property at sea, as well as Russian forced nationalisations –to say nothing of blowing up civilians and threatening the use of nuclear weapons on state TV– is business as usual? Contract, shmontract.

Equally obviously, this has a benign interpretation and a grave one. The benign one is Europe will swap EUR for RUB and then give the RUB back to Russia for gas. Except that Putin is introducing this new radical measure because he says there is no point in selling Russian gas or oil for dollars or euros if he can’t spend them: they are funny money to him under sanctions. As such, the grave interpretation is Putin attempting to get his own funny money accepted as equivalent to the dollar and euro, even if it is managed by a central bank where everyone is either quitting or trying to quit, and as the last remaining Russian liberal, Anatoly Chubais, leaves both the Kremlin and the country in opposition to the war.

Yet paying Russia in roubles would both prop up RUB and undermine Western sanctions. Putin would clearly chisel away at them: “Yes, I have the euros: but now I need you to remove the following measures so I can benefit from them….” Indeed, EU countries are already saying they won’t pay in roubles. Yet don’t expect Putin to blink: he “loses money” by not selling energy, but it’s money he literally cannot spend. Better to escalate, ‘shake the box’, and try to split the West, as I have repeatedly warned was the risk.

As such, we could be looking at the scenario where Russian energy taps are turned off. Helpfully for Russia, Germany just underlined this will mean a crippling recession. European gas prices jumping 30% was a knee-jerk reaction that is only a down-payment on what we would ultimately see. We were already getting market calls that oil was heading back over $150 in the near future, and Brent was up to $121.50 at time of writing: that benchmark also overlooks the far larger squeeze on the industrial workhorse fuel that is diesel. That is what drives the trucks that drive goods from farms, factories, or ports to warehouses or retailers.

As soon as Friday, the US may announce a plan to help Europe move away from Russian gas: well, it better kick in before the following Friday. And this is the same US unable to square the circle of its own energy needs, its own shale energy (due to green policies), Canadian energy (due to green policies), energy held by geopolitical opponent Venezuela, and energy held by traditional Middle East allies (due to Iran policy, which is the inverse of what the US is doing vs. Russia, and yet expecting good outcomes – as dismembered in this Wall Street Journal op-ed.)

The EU was already looking at spending lots on energy subsidies. Some in the US Congress are talking about stimulus cheques if retail gasoline prices are over $4 a gallon. The UK government, whose Office for Budget Responsibility is forecasting the steepest one-year decline in living standards since records began in the 1950s, just cut fuel duty 5bp a litre, which takes prices all the way back to the level of a week ago(!), and tweaked national insurance thresholds while promising income tax cuts, which will help the middle class and not the poor. Clearly, even while not doing enough, fiscal deficits and public debt will growth – and as rates are also rising.

Moreover, unless the surge in energy prices is short-lived –which hinges on the war and the metacrisis suddenly resolving themselves(!)– then this is how you return to something like a 70’s-style wage-price spiral. Yes, it isn’t firms paying higher salaries to compensate for inflation, it’s the state, via direct transfers – but is the final outcome better? If we don’t do that we face stagflation, recession, and soaring populism. But if we do, global market prices won’t go down, and it is the world’s poorest who will bear the brunt of higher prices. They do populism too.

Indeed, fertilizer is soaring – leading to headlines like “Coffee Farmers Face ‘Mega Emergency’ as Fertiliser Costs Soar”, talking about Central America; Ukrainian media reporting “Russian invaders try to undermine Ukraine’s sowing campaign” and are “chaotically mining the Ukrainian territory and deliberately destroying agricultural machinery” means staple food prices are going to go up for another reason; steel prices are leaping, which will hit manufacturing and construction; and LME nickel went limit up yesterday – as trading was shut down and trades cancelled *again*. This is what key commodity ‘markets’ look like now: a total mess.

So much so, that commodity trading houses are calling for emergency central-bank intervention, evidenced by a letter sent by the European Federation of Energy Traders pleading for emergency liquidity support. The warnings of ‘this smells like 2008’ for the real economy are now there for all to see.

Yet the lesson from 2008 is that printing money pushes up asset prices without resolving underlying structural problems. If we don’t get central-bank support, current volatility and margin calls may, as some in the industry warn, see firms fail. However, if we CTRL-P into a market with not enough energy, fertilizer, Ukrainian wheat, steel, etc., then what do you think the impact will be for everyone except those trading them – who had been making massive profits until recently? Higher prices, until we deal with the real underlying problem. Which is the entire world order. Which higher prices destabilise.

Meanwhile, Russia Today chief Simonyan says: “Next step – barter payments with airplanes, high speed trains, whatever we need.” I was warning about barter and countertrade returning just last week. Except who will be swapping stuff with Russia to help them evade sanctions?

As NATO meets today and US President Biden pow-wows with the EU, what might be their response to Russia’s rouble move? Logically, either: kick the can down the road – for a week; blink and let Putin win  (which is unlikely); or escalate – which is most probable.

If so, how? More weapons into Ukraine and more sanctions on Russia. But that won’t solve the energy problem. In which case, the risks increase of the West trying to pressure China economically to get it to pressure Russia – all the more so if the scenario ahead is a Western recession anyway – which itself hits all Asian exporters.

Here Are All The Latest News And Developments From The Ukraine War: March 15