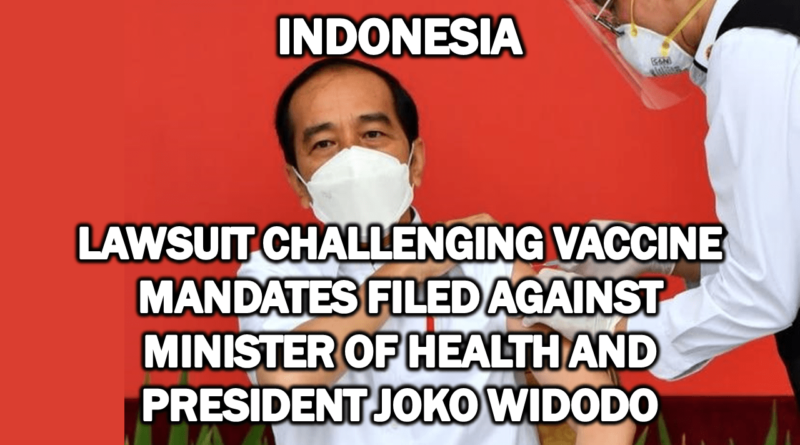 No government has the right to mandate the injection of experimental substances into the body of its people. And so, Ted Hilbert and Fatoni Rahman are taking Indonesia’s President and Minister of Health to court to contest an executive order for mandatory vaccination.

On 31 December 2020, the Minister of Health, Budi Gunadi Sadikin said, in accordance with an order he had signed two days before, that the government would send a short message (“SMS”) to those who must get vaccinated: “People who receive notification via SMS blast are required to follow the implementation of the Covid-19 vaccination.”

The Ministry of Health’s executive order is in contradiction to Indonesian law which gives every person the right to obtain full, balanced and responsible information about health and the right to informed consent.

“The Plaintiffs have the right to request and obtain clear and accountable information and data regarding the risks and benefits as well as the effectiveness of vaccines so that the Plaintiffs can independently and responsibly decide about Covid-19 vaccination,” investigasi.org’s press release states.

A second aim of the lawsuit is to determine the effectiveness and safety of vaccines.  Hilbert and Rahman conducted independent research from many global government sources, including the Indonesian government, and peer reviewed studies from reputable international journals and found, inter alia:

Their conclusions were that “the risks of Covid-19 vaccination outweigh the benefits for themselves and most other people, while acknowledging that there may be a benefit for specific groups of people. Most importantly, vaccination does not prevent transmission of Covid-19, as admitted by the Ministry of Health, making vaccination clearly a matter of individual health decisions, not public health, and cannot be mandated through government policies.”

Since September 2021 they have made several attempts but every request for data regarding vaccine safety and effectiveness has been either ignored or formally denied, in a blatant violation of freedom of information laws as well as informed consent principle and laws.

In January 2022 the Ministry of Health rejected a demand from Hilbert that all Covid-19 vaccine mandates be stopped and a month later the State Secretary rejected Rahman’s Administrative Appeal to Indonesia’s President.

They have now taken the next step and on 15 March their lawsuit for Unlawful Actions by the Minister of Health and the President of the Republic of Indonesia was registered at the Jakarta Administrative Court.

March 24, 2022French Lawyer arrested for Treason after helping Reiner Fuellmich prove World Leaders have committed Crimes Against Humanity in the name of Covid-19

March 24, 2022What does the Global Elite have in store for us next?

We are heading straight for the biggest recession most people can remember. …