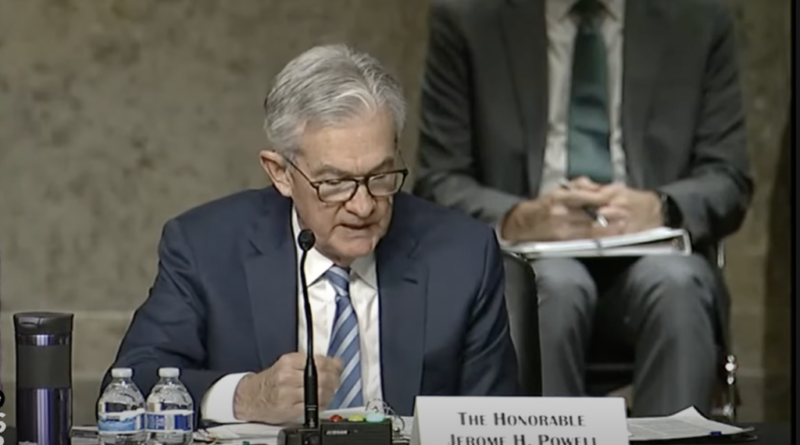 Earlier this week, Powell delivered what Reuters called “his most muscular speech to date” on the battle against inflation.

The central bank launched its war on inflation at the March FOMC meeting with an unimpressive first shot. It raised interest rates by a quarter-point. Peter Schiff called it the most anticipated and least significant rate hike ever. I compared it to dropping leaflets on the enemy saying, “We really mean it now.”

But while the Fed made a very tentative first move against inflation last week, Powell ratcheted up the tough talk this week. He said the central bank will have to move “expeditiously” to raise rates and “return the stance of monetary policy to a more neutral level.” He even mentioned moving to a more restrictive monetary policy “if that is what is required to restore price stability.” And Powell said flat-out the Fed was prepared to hike “more aggressively.”

If we conclude that it is appropriate to move more aggressively by raising the federal funds rate by more than 25 basis points at a meeting or meetings, we will do so.”

Powell continues to insist that the economy is strong enough to handle rate hikes.

Other Fed members piled on.

This seems a lot like Fed “open-mouth” operations. Powell and his minions are talking tough to see how the markets react to the possibility of more aggressive tightening. If the markets don’t tank – and so far they don’t seem to be – they’ll likely push forward. Pete Schiff said that the Fed will let rates rise until the markets roll over.

Remember, the only reason Powell is confident that the Fed can raise rates and shrink its balance sheet is because Powell is convinced we have this super-strong economy. And one of the reasons for the economic strength is the stock market. So, as long as the stock market is going up, Powell has no reason to question that narrative that the economy is strong.”

Here’s the question. Is Powell & Company strong enough to hold its ground when the bubble economy pops and the markets start to crash?

Because that’s what’s going to happen.

There is a tipping point. There will be a rate hike that is one rate hike too many – the proverbial straw that breaks the camel’s back. And I don’t think it will take too long to get to that level. I’ll be surprised if they can push rates to 2%.

During his post-FOMC press conference, Powell indicated that price stability is so important that the Fed may have to keep on hiking even if unemployment rises. The implication is that the central bank will push forward with tightening even if it causes a recession.

In the first place, a 2 or 3% interest rate is not enough to fight inflation. Real rates would remain deeply negative. Paul Volker pushed real rates to about 6% to get in front of the inflation curve in the early 80s.

But Jerome Powell is no Paul Volker. He’s more of a Biff. (The bully in Back to the Future for those who might not get the reference.)

He can talk the talk. But can he walk the walk when the economy starts falling down around his ears?

The Fed plan seems to be to raise rates a little and hope inflation goes away. But as Mike Tyson said, “Everybody has a plan until they get punched in the mouth.”

It’s easy to talk tough before you step into the ring. It’s easy to be confident before the fight really begins. It’s a different matter when fists start to fly.

So, that brings us to the real question.

What does Powell do when the economy punches him in the mouth?

My gut is he will fold like the empty suit he is.

The Fed has a playbook. When the economy tanks, the central bank cuts interest rates and launches quantitative easing. That’s the fork it knows. Why should we expect Powell to behave any differently when the economy crashes the next time?

A BIKER DROPS DEAD DURING A RACE. NOT ALLOWED TO COMPETE WITHOUT THE SHOT…OR WITH IT SO IT SEEMS.