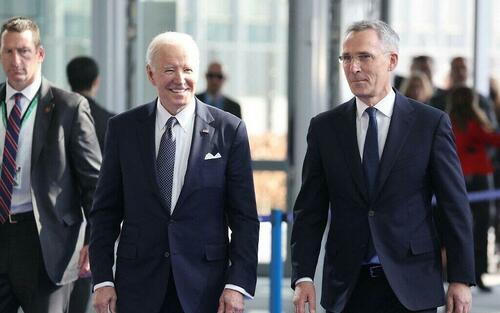 Upon the close of Secretary General Jens Stoltenberg’s press briefing, NATO released its official statement from the extraordinary session over the Ukraine crisis… “We, the Heads of State and Government of the 30 NATO Allies, have met today to address Russia’s aggression against Ukraine, the gravest threat to Euro-Atlantic security in decades,” the statement posted to NATO’s website begins. “Russia’s war against Ukraine has shattered peace in Europe and is causing enormous human suffering and destruction.”

The statement called on Putin “to immediately stop this war and withdraw military forces from Ukraine, and call on Belarus to end its complicity, in line with the Aggression Against Ukraine Resolution adopted at the UN General Assembly of 2 March 2022.” Further it said the invasion “makes the world less safe” and additionally condemned the Russian leader’s rhetoric as “irresponsible and destabilizing.”

And at a moment President Volodymyr Zelensky’s is being seen as a “hero” and icon of sorts, and further following his pre-recorded address before the summit wherein he urged more weapons from the West (while stopping short of requesting a no-fly zone), the NATO statement reads:

Ukrainians have inspired the world with heroic resistance to Russia’s brutal war of conquest.  We strongly condemn Russia’s devastating attacks on civilians, including women, children, and persons in vulnerable situations. We will work with the rest of the international community to hold accountable those responsible for violations of humanitarian and international law, including war crimes.

This comes after the Biden administration on Wednesday saying it believes war crimes have been committed by Russian forces, in a first formal statement charging such.

Russia needs to show it is serious about negotiations by immediately implementing a ceasefire. We call on Russia to engage constructively in credible negotiations with Ukraine to achieve concrete results, starting with a sustainable ceasefire and moving towards a complete withdrawal of its troops from Ukrainian territory.

On Ukraine’s resistance and right to self defense, it said:

Ukraine has a fundamental right to self-defence under the United Nations Charter.   Since 2014, we have provided extensive support to Ukraine’s ability to exercise that right.  We have trained Ukraine’s armed forces, strengthening their military capabilities and capacities and enhancing their resilience.  NATO Allies have stepped up their support and will continue to provide further political and practical support to Ukraine as it continues to defend itself.

NATO Allies will also continue to provide assistance in such areas as cybersecurity and protection against threats of a chemical, biological, radiological, and nuclear nature.  NATO Allies also provide extensive humanitarian support and are hosting millions of refugees.  Foreign Ministers will discuss further our support to Ukraine when they meet in April.

Crucially the statement calls out China, after a week-and-a-half of Biden administration claims that it’s secretly resupplying the Russian military with weapons. The NATO statement says:

We call on all states, including the People’s Republic of China (PRC), to uphold the international order including the principles of sovereignty and territorial integrity, as enshrined in the UN Charter, to abstain from supporting Russia’s war effort in any way, and to refrain from any action that helps Russia circumvent sanctions. We are concerned by recent public comments by PRC officials and call on China to cease amplifying the Kremlin’s false narratives, in particular on the war and on NATO, and to promote a peaceful resolution to the conflict.

In response to Russia’s actions, we have activated NATO’s defence plans, deployed elements of the NATO Response Force, and placed 40,000 troops on our eastern flank, along with significant air and naval assets, under direct NATO command supported by Allies’ national deployments. We are also establishing four additional multinational battlegroups in Bulgaria, Hungary, Romania, and Slovakia. We are taking all measures and decisions to ensure the security and defence of all Allies across all domains and with a 360-degree approach.  Our measures remain preventive, proportionate, and non-escalatory. We will now accelerate NATO’s transformation for a more dangerous strategic reality, including through the adoption of the next Strategic Concept in Madrid.

– NATO provides significant military support to Ukraine, trained tens of thousands of Ukrainian soldiers
– We will not send NATO troops, planes
– A no-fly zone over Ukraine would mean a NATO-Russia conflict pic.twitter.com/wWqq0Rpjyg

The NATO statement says further that “In light of the gravest threat to Euro-Atlantic security in decades, we will also significantly strengthen our longer term deterrence and defence posture and will further develop the full range of ready forces and capabilities necessary to maintain credible deterrence and defence,” it continues. “These steps will be supported by enhanced exercises with an increased focus on collective defence and interoperability.”

On cyber attacks, the statement lays out:

We are enhancing our cyber capabilities and defences, providing support to each other in the event of cyber-attacks.  We are ready to impose costs on those who harm us in cyberspace, and are increasing information exchange and situational awareness, enhancing civil preparedness, and strengthening our ability to respond to disinformation. We will also enhance our preparedness and readiness for chemical, biological, radiological and nuclear threats. We will take further decisions when we meet in Madrid.

The statement ends with the following lines: “President Putin’s choice to attack Ukraine is a strategic mistake, with grave consequences also for Russia and the Russian people.  We remain united and resolute in our determination to oppose Russia’s aggression, aid the government and the people of Ukraine, and defend the security of all Allies.”

Interestingly and quite worrisome from Stoltenberg’s earlier press conference, despite stressing the need for “deconfliction”, he said that theoretically Article 5 ‘collective defense’ could be triggered in the event of a major cyberattack.

He said this when pressed on the issue by a reporter: “On cyber, well we have stated that cyberattacks can trigger Article 5 but we have never gone into the position where we give a potential adversary of defining exactly when we trigger Article 5.”

A direct NATO-Russia clash leading to WW3 based on a… cyberattack? We certainly hope not. 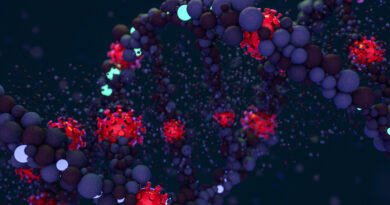