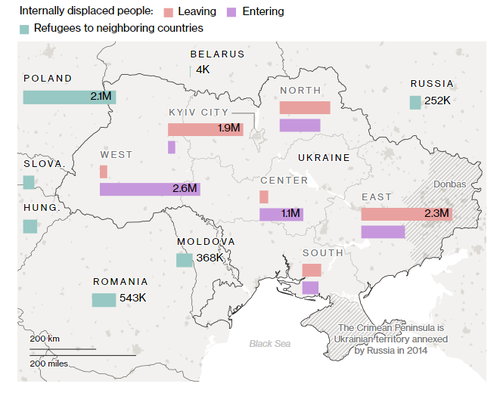 A week after it was reported that several major Polish cities had reached “capacity”, President Biden, who is holding emergency talks with NATO leaders in Brussels, is expected to announce plans for the United States to take in 100,000 Ukrainian refugees and others fleeing Russia’s invasion.

The move comes as more than 10 million people in Ukraine have been forced from their homes and more than 3.4 million have fled the country, including 2 million who arrived in Poland.

Bloomberg reports, citing a senior Biden administration official, that some of those allowed into the country will come as refugees, but the U.S. will also permit others to seek parole status or immigrant on non-immigrant visas.

Interestingly, following our report on Ukrainian border officials refusing to allow transgender women to leave the country, Bloomberg reports that the official said the U.S. is committed to protecting LGBTQ people and those with medical needs that have been disrupted by war.

Bear in mind that this virtuous act of asylum-provision could be abused. As we recently noted, according to an investigation by newspaper Le Figaro, around a third of Ukrainian refugees arriving in France are actually economic migrants from other areas of the world, mostly North Africa and the Middle East.

Stephen Roach: Fed Is “Delusional”, Powell Is No Volcker