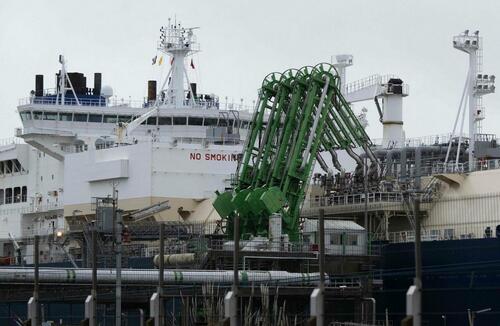 After EU leaders regrouped on Friday for the second day of a Brussels summit organized to allow them to discuss strategies or ratcheting up the pain on the Russian economy (which is already facing the most stringent international economic sanctions ever applied to a major world power), President Biden has confirmed that the US and EU have agreed on a new scheme to increase exports of American LNG to the Continent.

In a plan that resembles Jamie Dimon’s call for a “Marshall Plan for Energy”, the US and the EU on Friday agreed to ship an additional 15 billion cubic meters of LNG to the 27-nation bloc this year. The shipments will consist of supplies from the US and “elsewhere” (i.e. Canada).

Of course, that sum still wouldn’t be enough to completely wean the bloc off its reliance on Russia imports. In fact, it only covers roughly two-thirds of the record 22 billion cubic meters of LNG the bloc imported last year.

As we noted earlier, Russia supplied 25% of all oil imported by the EU, which is three times more than the second-largest trade partner, and even larger quantities of natural gas, as data from Eurostat reflect.

For those who aren’t familiar with the mechanics of importing natural gas, the fuel can be tricky to export by ship. Unlike other fossil fuels like crude and coal, natural gas must be cooled into liquid form, packed onto a tanker, then carefully “re-gasified” at special facilities. On the other hand, the natural gas that flows through pipelines like Nord Stream 2 avoids this cumbersome process entirely.

Unfortunately for the Europeans, the new plan could take years to implement, raising the possibility of further increases in European natural gas prices.

But while the Biden Administration has generally been hostile to the American energy industry, the deal virtually guarantees new markets for American LNG, incentivizing domestic producers to expand capacity – and quickly.

At present, the US is the world’s largest natural gas producer, and in January and December, it was the largest exporter of LNG (that is, natty gas that doesn’t travel through pipelines). Already, nearly 70% of those LNG shipments went to the 27 nations of the EU, the UK and Turkey.

Just yesterday, some European leaders were dismissing reports of a potential Russian energy import boycott as “wrong” and even “harmful” (since they could induce more panic-buying of energy, which in turn would send prices higher). But today, German news magazine Der Spiegel reported that Germany’s Economy Ministry wants to halve the country’s dependence on Russian energy by mid-year, while becoming independent of Russian coal by the fall. By 2024, Europe’s largest economy hopes to be fully independent of Russian gas.

“By the middle of the year, Russian oil imports to Germany are expected to be halved,” Spiegel quoted the memo as reading. “By the end of the year, we aim to be almost independent.”

“By autumn, Germany can be independent of Russian coal.”

It’s an ambitious plan, but it still wouldn’t be enough to justify a complete boycott.

While oil and gas are critical for humanity’s survival, Europe also depends on Ukraine and Russia for imports of wheat, fertilizer and other soft commodities that are vital to guaranteeing sufficient food supplies. While Jamie Dimon’s “Marshall Plan for Energy” appears to have come together relatively quickly, how much longer will it be before the US is also forced to share some of America’s (increasingly precious) food supplies with the Europeans as well? Because even President Joe Biden acknowledged yesterday that Continental food shortages would likely materialize as a “necessary price” of the EU’s sanctions.

Letter to the Editor: The Truth About Fiat Currency

US Hits Over 400 Russian Individuals & Entities With New Sanctions