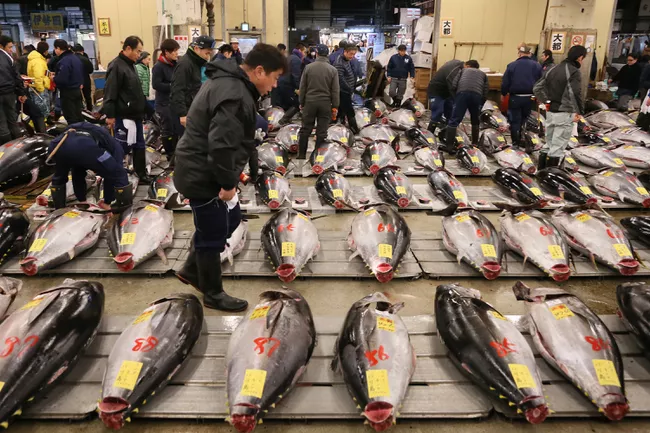 Migratory and aggressively predatory fish that can grow up to 10 feet long, weigh over 1,500 pounds, and live up to 40 years in the wild, bluefin tuna are separated into three distinct species.1

The Pacific bluefin, found on the West Coast and Pacific Islands, is currently listed as Near Threatened by the International Union for Conservation of Nature with decreasing population numbers.

The Atlantic bluefin, which lives in waters of the North Atlantic Ocean, went from endangered in 2011 to Least Concern in 2021 due to a 22% population increase over the previous four decades.2

The Southern bluefin tuna, currently the most endangered species, was downgraded from Critically Endangered to Endangered in 2021, also thanks to an increase in population numbers.

Despite gains in some population data, all three species of bluefin tuna continue to face significant threats worldwide and require our attention.

The delicate marine ecosystem that the bluefin tuna relies upon for survival is interconnected. Often, what affects the tuna also affects its prey sources (species like squid, crustaceans, and baitfish) and vice versa.

Factors like bycatch (when tuna are caught accidentally by fishers), overfishing, and climate change are the biggest threats facing both endangered bluefin tuna populations and the species affiliated with them.

In the Gulf of Mexico, bluefin tuna begin spawning from January to June, when they experience higher temperatures and reduced oxygen levels than during the rest of the year. The stress they endure makes it more difficult for tuna to recover when accidentally caught and discarded. Although targeting bluefin tuna is prohibited in the Gulf, fishermen in longline and trawl fisheries can keep one bluefin per trip as an “incidental” catch.3

In places like Japan, where bluefin tuna is a highly prized delicacy that can go for millions of dollars,4 illegal seafood has become a significant problem—though the issue certainly isn’t limited to Pacific waters.

In 2018, authorities arrested 76 people connected to a large illegal trade of Atlantic bluefin tuna caught between Malta and Spain. The haul totaled 80,000 kilograms of illegally caught and marketed tuna, and the trade was estimated to be worth over 12 million euros per year.5

A 2020 assessment completed by the International Scientific Committee for Tuna and Tuna-Like Species in the North Pacific Ocean found that stock of Pacific bluefin tuna had continued to be overfished in relation to biomass rebuilding goals.6 While fishing mortality has declined among the species, it has not reached targeted conservation levels.

Even so, the Pacific bluefin species has yet to earn a place on the United States endangered species list. In 2016, a group of conservationists including the Center for Biological Diversity, Mission Blue, Earthjustice, Sierra Club, and Greenpeace, submitted a formal request to the U.S. Secretary of Commerce to protect the Pacific bluefin tuna under the Endangered Species Act. That petition was rejected.

According to the International Seafood Sustainability Foundation (ISSF), Atlantic bluefins saw a 14% increase in catches between 2019 and 2020, though the ISSF maintains that overfishing is not occurring.7

Southern bluefin, which is still considered endangered, saw a 2% catch decrease from 2018 to 2019. Again, the ISSF concluded that overfishing was not occurring due to measures taken in sustainably fishery rebuilding plans.7

Worldwide, bluefin tuna accounted for 1% of the global catch of major commercial tuna (including skipjack, yellowfin, bigeye, and albacore) in 2019.

As climate change continues, scientists project a global reduction in the number of bluefin tuna due to pressures like increased water temperatures, changes in ocean circulation and kinetic energy, and changes in storm and wind patterns.8

When it comes to the island countries and territories supported economically by fisheries, climate-living marine resources simulation models show that 89% of countries could see a decline in their maximum revenue potential by 2050.9

Other environmental disasters, such as oil spills, also pose a considerable threat to bluefins.

What We Can Do Several science-backed programs are working to learn more about bluefin tuna with the hopes of unveiling important research and monitoring different species in the open ocean.

A team from Stanford University led a 10-year research project using a new tagging technology to discover more about Atlantic bluefin migration and mortality patterns. They found that, since the species congregates in hot spots for three or four months each year to feed, scientists could implement acoustic “gates” and individual ID numbers to collect large amounts of information at a time and monitor fish behavior for consecutive years. These discoveries could prove instrumental in the future sustainable management of Atlantic bluefin populations.10

Conservationists are continuously petitioning the federal government to protect vulnerable species like the Atlantic bluefin under the Endangered Species Act. Organizations like the Center for Biological Diversity are even calling for a “bluefin boycott,” in which consumers pledge to avoid bluefin and restaurants that serve it; the idea is to cut market demand for the species and thereby reduce fishing volumes.

Bluefin tuna have a vital role in the ocean as a top predator in the marine food chain. At the same time, many communities rely on fishing as an essential source of income to feed their families. Working to stop overfishing and bring more sustainable management practices to the global fishing industry will not only help maintain healthy levels of bluefin tuna populations in the oceans but will also benefit fishing communities that rely on healthy populations for their livelihoods.

Save the Southern Bluefin Tuna 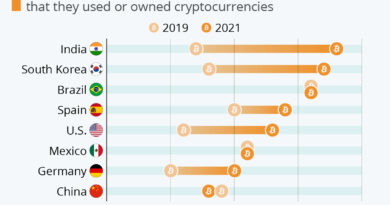 Where The Crypto Hype Is Taking Over