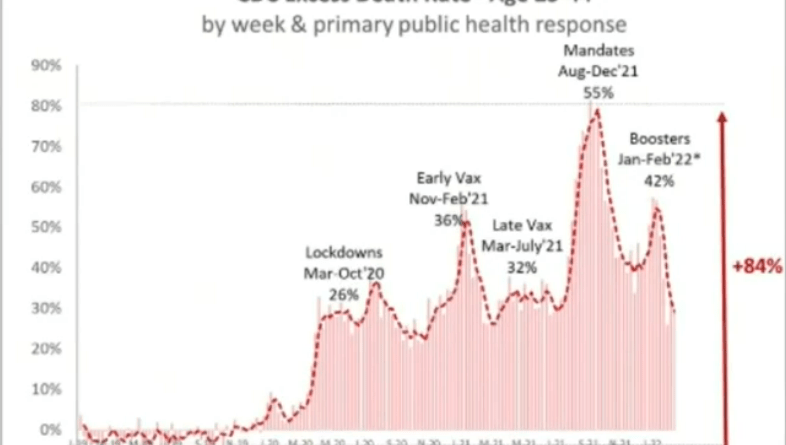 An analysis of figures from the Centers for Disease Control and Prevention (CDC) database has revealed that 61,000 people, supposedly in the prime of their life, aged 25-44, died of vaccine-related causes in the U.S. in the fall and winter of 2021.

Edward Dowd, a former BlackRock portfolio manager, made the appalling revelation during the March 10 episode of “The Alex Jones Show.”

According to Dowd, an investment adviser on Wall Street, an insurance industry expert who is part of his team stumbled upon the buried truth when, looking for something else, he broke down the CDC figures by age and created his own baseline death rates from there.

Showing charts the actuarian plotted from the figures, Dowd pointed at chart four as the punch line.

“Basically, you see that millennials experienced 84 percent excess death in the fall and winter of 2021. So excess deaths accelerated when mandates and boosters hit,” Dowd told Jones.

“And this age group is important because they’re healthy. And you can’t say that they, you know, miss their cancer screenings. This is ages 25 to 44. So this is just devastating evidence that the vaccines are causing this age group to die at an accelerating rate.

“I know I showed percentages in that chart, but the actual bodies are 61,000. That’s the Vietnam War event that just occurred to the millennial generation – 58,000 died in the Vietnam War.”

Dowd said he’s certain the vaccines are the culprits because the acceleration started in the summer when the mandates started hitting in August and September last year.

“And then [President Joe] Biden came out [announcing the mandates]. And boosters were also authorized and started happening. So let’s call this what it is. This is death by government mandate or democide, death by government. That’s what’s going on here.”

The insurance companies have pointed at the alarming spike in vaccine-related deaths before, but the government refused to heed the warning and proceeded with the mass injections.

Dowd could only speculate on why the “pyschos” in government did this.

“Well, there’s two ways to look at this. Just good old-fashioned power and greed, or there was a plan hatched by some very evil people. I’m going with power and greed for now. But you know, as we roll through this very active fraud, it’s being exposed. There’s more and more evidence coming to the front that this is part of some sort of bigger grand plan.”

Dowd’s suspicion grew after noticing that what’s happening in the U.S. is being replicated by other global governments that have mandated the vaccines.

“So this is a worldwide tragedy. And it’s a war. And whether the government knew it was a war on people, they’re currently at war on their own people. And it’s the most disgusting thing I’ve ever seen in my life.”

Dowd related that a board member of a German insurer approached him two weeks ago and revealed their government was underreporting vaccine-related injuries by a factor of 25 to one. That is based on approximately three million Germans, or 3.6 percent of the total population, who were injured by vaccines enough to seek medical treatment.

No wonder, Dowd is leaning toward the grand plan scheme now.

That’s why his team is going to drop more charts, all interpreting the CDC data, until the true reason why there were more deaths in 2021 than 2020 is exposed.

Citing more figures, Dowd said the over 65 generation saw 306,000 excess deaths in the second half of last year until February. “That is a World War II event,” explained Dowd, noting over 291,000 Americans died in the war. Dowd also pointed out that there’s a little over 1.1 million people in excess deaths in the U.S. since the pandemic began.

And still, the mainstream media is talking about Ukraine, Dowd lamented. “We just literally had a war here on our own soil. “We’re at war with someone and it’s occurring.”

Vanuatu, or the Republic of Vanuatu, is an island country in the …

March 26, 2022The PfizerGate Scandal: Governments worldwide are hiding data to disguise the fact the Covid Vaccines damage the Immune System and cause AIDS

Important indicator shows that the U.S. is headed for its worst real estate crash in country's history 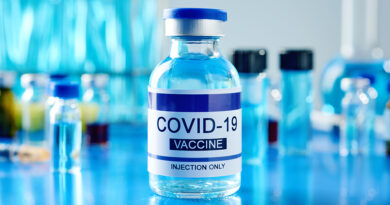