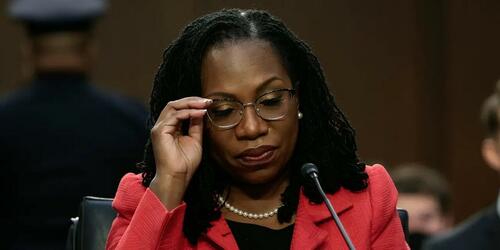 Democrats hoping to snag at least one Republican Senator to support Supreme Court Nominee Ketanji Brown Jackson may need to dig deep to secure all 50 members of their party – as GOP support for the controversial judge has all but evaporated following a week of contentious confirmation hearings.

A simple majority of all 50 Democrats can confirm Jackson without GOP support, with Vice President Kamala Harris breaking any tie – and with Friday’s announcement from Sen. Joe Manchin (D-WV) that he’ll support Jackson, it only leaves Sen. Kyrsten Sinema as the other potential roadblock on the radar.

“I think the read out from the members who have been in the hearing room for those of us who haven’t been in the hearing room is that she’s not changing minds,” said Sen. John Thune (R-SD), the #2 GOP Senator, according to The Hill. “They were thinking that she might win people over. I think if anything a closer examination of her record … has probably moved some of our members in the opposite direction.“

Another GOP Senator told The Hill “I didn’t think the hearings went as well for her as I thought they would,” referring to unsatisfactory answers Jackson gave over light sentences she handed down to pedophiles.

“I don’t believe she has sympathy for child pornographers. I don’t believe … any rational person does. I do believe her sentencing practices undercut deterrence,” said Sen. Lindsey Graham (R-SC), who told reporters he has ‘concerns’ about Jackson.

On Thursday, Senate GOP Leader Mitch McConnell (KY) formally announced his opposition to Brown’s nomination, saying in a statement: “After studying the nominee’s record and watching her performance this week, I cannot and will not support Judge Jackson for a lifetime appointment to the Supreme Court.”

One Democrat ‘has a feeling’ however…

If no Republicans vote for Jackson, she’ll be the second justice in US history to be confirmed entirely by one party – the first being Justice Amy Coney Barrett in 2020, who GOP Sen. Susan Collins (ME) crossed the aisle to vote against.

While Republicans oppose Jackson, they’ve said they won’t actually boycott her vote in the Judiciary Committee – which has been used in other hearings to try and ‘bottle up’ other Biden nominees, such as Sarah Bloom Raskin’s nomination to the Federal Reserve – which was withdrawn over controversial statements on climate change and other matters.

Jackson appears increasingly likely to face a tie vote in the Judiciary Committee, which is evenly split 11-11.

GOP Sens. Lindsey Graham (R-S.C.) and John Cornyn (R-Texas) both voted to advance Jackson’s appeals court nomination in committee last year, letting her avoid a tie. Cornyn ultimately voted against her nomination before the full Senate and told The Hill that he wouldn’t split his vote in a similar way for her Supreme Court nomination.

GOP Sen. Thom Tillis (N.C.), who voted against Jackson’s appeals court nomination, has emerged as a potential sleeper “yes” vote to watch because of his more favorable interaction with Jackson during the high-profile committee hearings. -The Hill

If Jackson receives a tie vote, Democrats will be required to discharge her nomination from the committee to the full Senate – and would mark the first time a Supreme Court nominee has been forcibly discharged from the Judiciary Committee since 1853.

The Committee will vote on Jackson’s nomination on April 4.