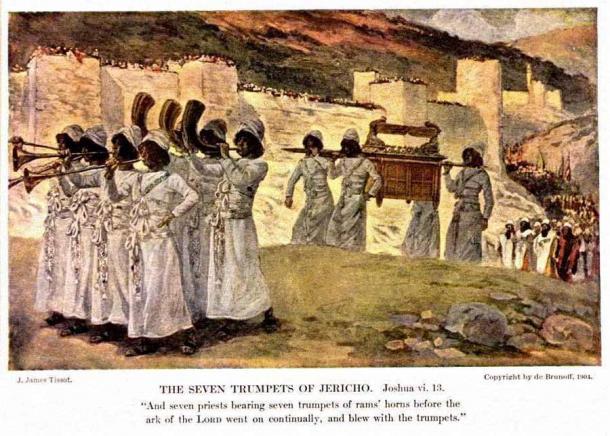 Located in the Palestinian West Bank, Jericho’s claim to fame lies in being the oldest continually inhabited city in the world. Surrounded by springs, the city has attracted humans for thousands of years, and archaeologists have unearthed over 20 different settlement layers that go back as far as 11,000 years!

The Seven Trumpets of Jericho, by James Tissot. ( Public domain )

The Ancient City of Jericho in the Bible

Then the Lord said to Joshua, “See, I have delivered Jericho into your hands, along with its king and its fighting men. March around the city once with all the armed men. Do this for six days. Have seven priests carry trumpets of rams’ horns in front of the ark. On the seventh day, march around the city seven times, with the priests blowing the trumpets. When you hear them sound a long blast on the trumpets, have the whole army give a loud shout; then the wall of the city will collapse and the army will go up, everyone straight in.”  Joshua 6:2-5

The ancient city of Jericho is well known from the Biblical story where God commands Joshua to destroy the city because of its inhabitants’ disobedience to God, as the above abstract mentions. But the story of the city goes back to about 8,000 BC when it was occupied during the  Natufian period , making the structures in it the oldest man-made structures on Earth.

Is “Monkeypox” a threat, accident/covered up, or illusion?

US Intelligence Has Helped Kill Multiple Russian Generals In Ukraine