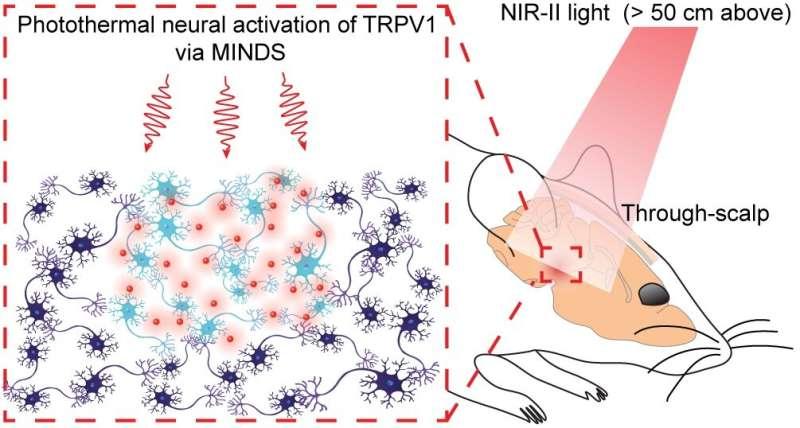 Imagine the brain as a giant switchboard covered with thousands of buttons, knobs, dials and levers that control aspects of our thought, emotions, behavior, and memory. (You can think of the movie Inside Out, if you like.)

For more than a century, neuroscientists have been methodically flipping these switches on and off, alone or in combination, to try to understand how the machine works as a whole. But this is easier said than done. The cellular circuits that control mind and behavior tangle together throughout the opaque, gelatinous mass of our brain tissue and don’t come with handy on/off switches for easy reverse engineering.

Now, scientists at the Wu Tsai Neurosciences Institute at Stanford University have developed the first non-invasive technique for controlling targeted brain circuits in behaving animals from a distance. The tool has the potential to solve one of the biggest unmet needs in neuroscience: a way to flexibly test the functions of particular brain cells and circuits deep in the brain during normal behavior—such as mice freely socializing with one another.

The research was published March 21, 2022, in Nature Biomedical Engineering by Guosong Hong and colleagues at Stanford and Singapore’s Nanyang Technological University. Hong is a Wu Tsai Neurosciences Institute Faculty Scholar and assistant professor of materials science and engineering in the Stanford School of Engineering who uses his background in chemistry and materials science to devise biocompatible tools and materials to advance the study of the brain.

The newly published technique builds on the foundation laid down by optogenetics, a technique first developed at Stanford by Wu Tsai Neuro affiliate Karl Deisseroth and collaborators that introduces light-sensitive algal proteins into neurons to let researchers turn them on or off in response to different colors of light.

“Optogenetics has been a transformative tool in neuroscience, but there are limitations on what can be done with existing techniques—in part due to their reliance on light in the visible spectrum,” Hong said. “The brain is quite opaque to visible light, so getting the light to the cells you want to stimulate typically requires invasive optical implants that can cause tissue damage and skull-mounted fiber optic tethers that make it hard to study many kinds of natural behavior.”

Thinking as a materials scientist about ways to overcome these challenges, Hong recognized that biological tissues—including the brain and even the skull—are essentially transparent to infrared light, which could make it possible to deliver the light much deeper into the brain. Since existing optogenetic tools don’t respond to infrared light, Hong’s team turned to a molecule that evolved to detect infrared’s other form: heat. By artificially outfitting specific neurons in the mouse brain with a heat-sensitive molecule called TRPV1, his team found that it was possible to stimulate the modified cells by shining infrared light through the skull and scalp from up to a meter away.

TRPV1 is the molecular heat sensor that allows us to feel heat-related pain—as well as the spicy burn of a chili pepper—the discovery of which led to the 2021 Nobel Prize in Medicine. A similar receptor gives rattlesnakes and other pit vipers the “heat vision” that lets them hunt warm-blooded prey in the dark, and a recent study succeeded in giving mice the ability to see in the infrared spectrum by adding TRPV1 to their retinal cone cells.

The new technique also relies on an engineered “transducer” molecule that can be injected into targeted brain regions to absorb and amplify the infrared light penetrating through the brain tissue. These nano-scale particles, dubbed MINDS (for “macromolecular infrared nanotransducers for deep-brain stimulation”), work a bit like the melanin in our skin that absorbs harmful UV rays from the sun, and are crafted from biodegradable polymers used to produce organic solar cells and LEDs.

“We first tried stimulating cells with TRPV1 channels alone, and it didn’t work at all,” said Hong. “It turns out that rattlesnakes have a much more sensitive way of detecting infrared signals than we could manage in the mouse brain. Fortunately, we had materials science to help us.”

Hong’s team first demonstrated their technique by adding TRPV1 channels to neurons on one side of mouse motor cortex—a region that orchestrates body movements—and injecting MINDS molecules into the same region. At first the mice explored their enclosures at random, but when the researchers flipped on an infrared light over the enclosure, the mice immediately started walking in circles, driven by the one-sided stimulation of their motor cortex.

“That was a great moment when we knew this was going to work,” Hong said. “Of course it was only the beginning of validating and testing what this technology could do, but from that point on I was confident we had something.”

In another key experiment, the researchers showed that MINDS could enable infrared stimulation of neurons through the entire depth of the mouse brain. They inserted TRPV1 channels into the dopamine-expressing neurons of the brain’s reward centers, which are located near the base of the brain in mice, followed by an injection of MINDS into the same region. They then positioned a focused infrared light over one of the three arms of a standard radial arm maze and showed that mice became “addicted” to the invisible infrared light tickling their dopamine neurons—spending nearly all their time in the maze under its beams.

This experiment demonstrated that the new technique makes it possible to stimulate neurons anywhere in the brain through the intact scalp and skull—with hardly any of the light-scattering that would make this impossible with light in the visual spectrum. Remarkably, this worked even when the beam of infrared light was positioned as far as a meter above animals’ heads.

Hong sees immediate applications of the technique for the growing movement in neuroscience to study the brain circuits involved in natural social behavior in mice in order to better understand the systems that underlie social cognition in humans.

“Like us, mice are a social species, but studying an animal’s natural behavior within a social group is challenging with a head-mounted fiber-optic tether,” Hong said. “This approach makes it possible for the first time to modulate specific neurons and circuits in freely behaving animals. One could just shine invisible infrared light over an enclosure with cohoused mice to study the contributions of particular cells and circuits to an animal’s behavior within a social group.”

Hong and collaborators are continuing to refine the technique to make it simpler and easier to implement, he said. “In future we’d like to combine our current two-stage approach into a single molecular machine—perhaps by encoding some infrared-absorbing pigment into TRP-expressing neurons themselves.”

The work is one of several approaches Hong is involved in to make it possible for researchers—and perhaps one day clinicians—to non-invasively modulate neural circuits across the brain. For example, Hong and colleagues are also developing nanoscopic beads that can convert focused beams of ultrasound into light, and which can be injected directly into the bloodstream, making it possible to optogenetically target cells anywhere in the brain and to change this targeting at will within a single experiment.

“Conventional neuromodulation approaches gave us the ability to flip a few of the switches at a time in the brain to see what different circuits do,” Hong said. “Our goal is to take these techniques a step further to give us precise control over the entire switchboard at the same time.”