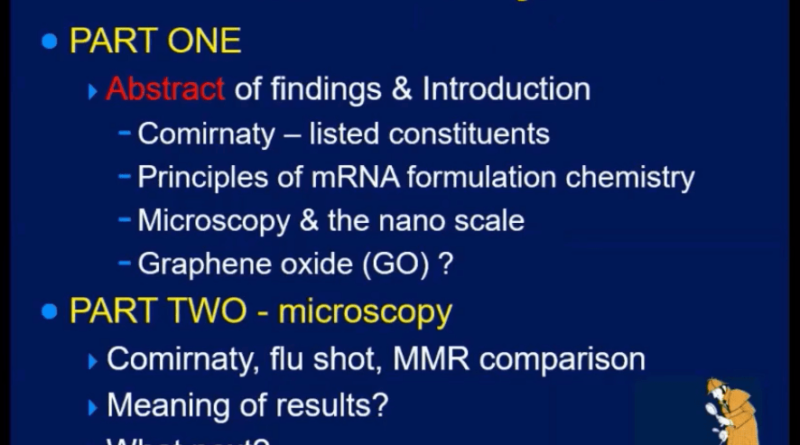 There are now four teams in New Zealand performing microscopic examinations in an attempt to establish what the so-called Covid vaccines contain and Dr. Robin Wakeling has gone public with his findings. He compares the Comirnaty (Pfizer-BioNTech) Covid injections to other vaccines and discusses the findings with Dr Mark Bailey.

Dr. Robin Wakeling is a microbiologist and biodeterioration expert from New Zealand.  During a presentation with Dr. Sam Bailey’s husband Mark, he gave a step by step, demonstration of how Pfizer’s Comirnaty “vaccine” begins with tiny droplets, and over time, accelerated with heat or magnetism, the droplets form strings, become straight lines, and slowly become more complex rectangular structures with protrusions.

Although he does not use a high magnification microscope as some of the other researchers, what he discovered supports the findings reported by researchers from the Spanish La Quinta Columna and New Zealand’s Life of the Blood.

You can read more about what other researchers have found in our previous articles:

The disclosed ingredients, according to literature, of Pfizer’s Comirnaty mRNA injection are: mRNA; four different lipids; buffers; surfactants, stabilisers and at least two unnamed, as they are under a trademark or patent, but declared as “proprietary additives.”

It’s important to note that the Covid injections contain polyethylene glycol (“PEG”), a compound derived from petroleum. PEG is a well-established metabolic poison, Dr. Wakeling said but, “for some bizarre reason it seems okay to add it to a vaccine.”  If you added PEG to most other drugs “you’d be laughed out the door,” he said.

Although it is not disclosed as an ingredient there are some very good reasons for people to suspect the Covid injections contain graphene oxide, Dr. Wakeling said, if you do a quick search on the internet, it wouldn’t take very long to find at least a couple of dozen papers that touch on the use of graphene oxide in medicine.  He added that the safety concerns regarding graphene oxide are extensive.

Click on the image below to watch the video on Odysee.

Vanuatu, or the Republic of Vanuatu, is an island country in the …

March 26, 2022The PfizerGate Scandal: Governments worldwide are hiding data to disguise the fact the Covid Vaccines damage the Immune System and cause AIDS