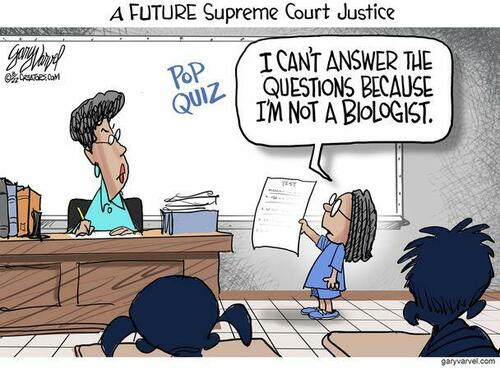 Authored by Thomas Lifson via AmericanThinker.com,

The media and other Democrats realize they have a problem when their president’s nominee for the nation’s highest court embraces postmodern BS like transgenderism’s claim that merely thinking of oneself as the opposite sex magically transforms that person into the opposite sex. Yet that is what Judge Ketanji Brown Jackson effectively did when she told Senator Blackburn that she couldn’t define what a woman is because “I’m not a biologist.”

The mockery that ensued was painful because it exposed part of the nonsense that has become gospel on the left.  Judge Jackson took that nonsense position because she fears the transgender lunch mobs that, under the banner of ”intersectionality,” are able to mobilize the angry identity groups that bully the rest of the left and much of the middle into compliance with their madness.

Into the fray, however, jumped USA Today, which has become one of the most dogmatic left-wing outlets in the nation. In a “news” story written by Alia E. Dastagir,  dishonestly headlined, “Marsha Blackburn asked Ketanji Brown Jackson to define ‘woman.’ Science says there’s no simple answer.”

In the 13th hour of Judge Ketanji Brown Jackson’s confirmation hearing, Sen. Marsha Blackburn asked: “Can you provide a definition for the word ‘woman’?” https://t.co/Ikgkqxj83h

Twitchy collected some of the resulting mockery that made it past the censors in Twitter:

I guess science is a social construct. pic.twitter.com/70a7hDW0l4

Those quotation marks need to be taken off the word, woman, and put around the word, science

But for a properly satisfying rebuke, I suggest reading the Ace of Spades version, which ladles on a full measure of the contempt that Ms. Dastagir and her propaganda rag so richly deserve. Some excerpts:

Actually science says that a “woman” is an adult human with two X chromosomes.

Oh, and a vagina and breasts, if you don’t have a chromosome test kit available.

First you said “science” can’t answer this question, but now it turns out you’re not asking scientists, you’re asking “gender law scholars” and “philosophers of biology.”

Who are not scientists. (snip)

Ketanji Brown Jackson is asked to define “woman” by Sen. Blackburn “I don’t want to see this question punted to biology as if science can offer a simple, definitive answer,” said Rebecca Jordan-Young, a scientist and gender studies scholar at Barnard College whose work explores the relationships between science and the social hierarchies of gender and sexuality.

Oh, a “scientist and a gender studies scholar.”

Her bio says she’s a “feminist scientist.” You know — the famous scientific field of Feminism.

I wonder which branch of Feminism Science she works in — Theoretical Feminism? Applied Feminism? Experimental Feminism?

I am an interdisciplinary feminist scientist and science studies scholar whose work explores the reciprocal relations between science and the social hierarchies of gender, sexuality, class, and race.

“Interdisciplinary” means you mix fields, and you’re saying you’re a “feminist scientist,” which is already Not a Scientist, and you mix that with “gender studies scholar[ship],” making you even more Not a Scientist.

Her degree which she claims makes her a “feminist scientist” is in Noted Scientific Field “Sociomedical Sciences.” Um, again, adding in “social” into the mix.

And she’s attached, of course, to the Women’s and Gender Studies Department — not to any scientific department. Not to the “Sociomedical Science” department, which of course does not exist because it’s not a real thing.

So no, she’s not a “scientist.” She brands herself that way so she can make her gender studies claims sound “scientific” to idiots, such as those who populate the media.

You’re not a “scientist” just because you “feel science-y.” You’re a scientist if you do the work of an actual scientist. She does not. She’s just another idiot Gender Studies Marxist.

But Jordan-Young said she sees Jackson’s answer, particularly the second half of it, reflecting the necessity of nuance. While traditional notions of sex and gender suggest a simple binary — if you are born with a penis, you are male and identify as a man and if you are born with a vagina, you are female and identify as a woman — the reality, gender experts say, is more complex.

“There isn’t one single ‘biological’ answer to the definition of a woman. There’s not even a singular biological answer to the question of ‘what is a female,'” Jordan-Young said.

And now we’re off of the “scientists” completely, and on to the “philosopher of biology.”

There is much more.

Now that Joe Manchin has announced his support for confirming for the Supreme Court, there is no hope of keeping her off the bench, where she will be free to apply postmodernism’s tenets – its willingness to pretend words mean whatever they want them to mean — to interpreting the Constitution. But she will forever be associated with this nonsense, and the Democrat senators who voted to confirm her will be held responsible for installing her.

Justice-to-be Jackson will take her seat alongside Justice Sotomayor, who has recently spouted nonsense from the bench about abortion and children and Covid. Respectively graduates of Harvard and Yale law schools, the two justices are fanning suspicions about the effect of affirmative action on quality control at the elite law schools. 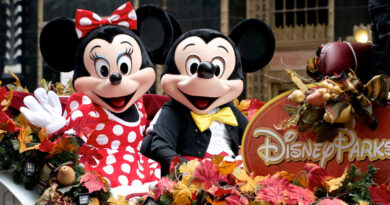 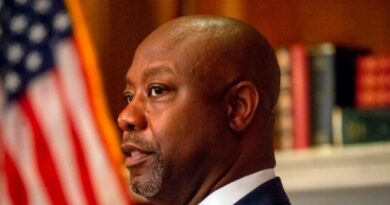