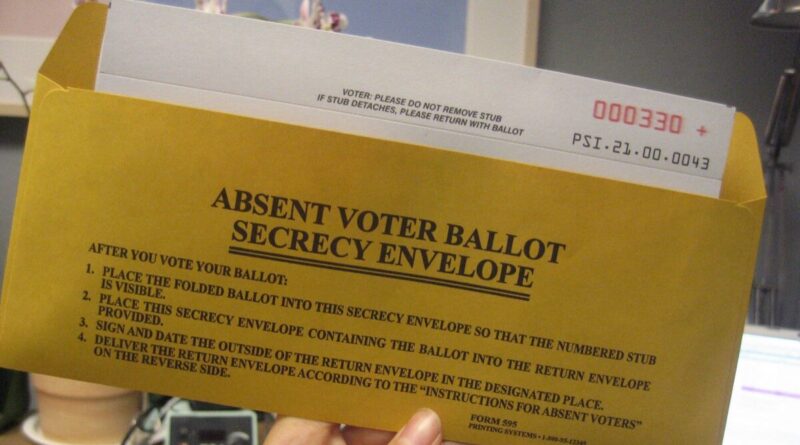 by Logan Washburn, The Federalist:

This private organization, with ties to Zuckerberg’s CTCL, gained access to absentee ballots and edged public officials out of the election process.

Anonprofit connected to Mark Zuckerberg-funded groups worked with Michigan Secretary of State Jocelyn Benson to influence state elections ahead of 2020. The changes include getting the state to alter how it used absentee ballots without an act of the state legislature.

Documents exclusively obtained by The Federalist through an open records request show National Vote at Home Institute CEO Amber McReynolds working with Benson to change Michigan elections policy. NVAHI shares leadership ties with the Center for Tech and Civic Life, a group that shuttled money from Zuckerberg to government election agencies ahead of the 2020 election, as The Federalist previously reported. In several instances, NVAHI and CTCL worked together to influence the 2020 election.

The documents also show that the private organization funded by Facebook tycoon Zuckerberg exists to push states to adopt mass mail-in balloting of the kind that made chaos of the 2020 election.

Mail-in ballots are proven to be significantly more susceptible to fraud, as a bipartisan federal election integrity commission chaired by former President Jimmy Carter concluded in 2005. That’s because mail-in ballots provide more opportunities to influence, obtain, and traffic in ballots.

In one recent example, during a 2017 city council election in Dallas, Texas, investigators found one person had fraudulently signed 700 mail-in ballots—more than the total vote difference between competing candidates at the time. During the 2020 election in Wisconsin, officials took part in ballot trafficking and used drop-boxes for mail-in ballots, which a judge later ruled violated state law.

Private Groups Telling Public Employees What To Do

In Michigan, this highly partisan organization directly affected voting rules, the new documents show. In the emails, McReynolds suggested that Benson use administrative rulemaking to implement a permanent absentee voting option in the state. Administrative rulemaking means making regulations based on an interpretation of the law, often yielding regulations that differ from the law’s original intent and sometimes its explicit text.

“I was thinking that you may have rule-making authority,” McReynolds wrote in an email on Feb. 5, 2019. “The language below indicates that voters have a right to vote without giving a reason, which to me has left open the possibility of permanent or election specific absentee requests. To me, this means you do not likely need a legislative change.”

“Thanks Amber,” Benson replied, “Looping in Jonathan Brater and Mike Brady from our legal and policy team to explore.”

Brater served as Benson’s legal policy director in 2019, and Brady began working as her chief legal director in February 2019, according to LinkedIn. Benson named Brater director of elections in November 2019.

“Michigan’s voters enshrined the right to vote absentee in our state constitution in 2018, and upon being sworn in to office Secretary Benson went to work implementing the will of the voters,” Rollow said.

The National Vote At Home Institute focused its 2020 work in Michigan on its top goal of increasing mass mail-in balloting. By January 2020, NVAHI had “hired a lobbyist to quietly push for an administrative fix that would speed up the ballot processing and counting in Michigan,” according to a 2020 presentation obtained through The Federalist’s open records request. NVAHI detailed a five-step plan to push universal absentee ballots, according to meeting material from 2019.

The states that receive one star from NVAHI’s rating system are those that require a valid excuse to vote outside a private booth on election day. States with five stars, its highest rating, had achieved NVAHI’s end goal of “Full Vote at Home.”

NVAHI developed four strategies to push 100 percent mail-in balloting policy in all 50 states, according to 2019 meeting material. The materials say the organization uses the first strategy to eliminate state safeguards on mail-in ballots: “Strategy 1: Reduce the number of Step 1 and Step 2 (excuse required) States to zero. We can achieve this through federal legislation or state by state (legislature or where possible– ballot initiatives),” meeting material reads.

The group’s final strategy is to affect how government election offices process absentee ballots: “Strategy 4: Work with states to improve their current procedures with regards to processing mail ballots. This includes a variety of reforms that improve the current process,” meeting material reads.

In 2020, NVAHI’s Circle of Advisors provided an update on the group’s national policy efforts, according to the Federalist-obtained public documents. A map in this update claimed progress in Michigan during 2018/2019 with “no excuse absentee,” but even more was planned for 2020, including “fixes to allow for earlier processing of ballots.”