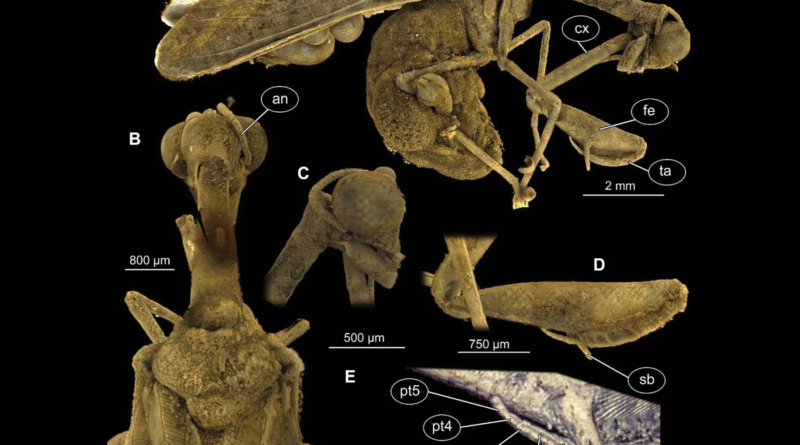 The fossil in amber.

The study of a 30-million-year-old block of amber has revealed a lacewing fossil – not in the usual lacewing form, with large eyes and four long wings, but with grasping or raptorial legs that make it look much like a praying mantis.

Unless you’re a lacewing expert, you might not know these insects have a long history of resembling the praying mantis. It’s the result of what’s known as convergent evolution, where two organisms evolve similar traits because they’re adapting to similar conditions.

Fossil records of mantis lacewings (or Mantispida) go all the way back to the Cretaceous period, stretching back 145 million years. However, this is the first adult mantis lacewing fossil to be recovered from the Cainozoic (or current) geological era.

“Here we report the first adult of Mantispidae from Baltic amber and place it into a larger framework regarding the quantitative morphology of raptorial forelegs across the lineage in terms of extant and extinct diversity,” write the researchers in their published paper.

A study of the fossil revealed that it was very like the extant genus Mantispa, but a covering of white film – common in Baltic amber fossils – means it’s hard to be sure. To acknowledge the uncertainty, researchers have inserted a question mark and called the new species Mantispa? damzenogedanica.

Almost 2 centimeters (0.79 inches) in length, the specimen was studied through a combination of techniques including microscopy and X-ray microtomography, where X-rays are used to build up a cross-section and 3D model of an organism.

3D renderings of the insect.

The research raises a number of questions about how Mantispidae may have evolved over the past 66 million years – when the Cainozoic period began – and why so few of them have been preserved from this particular era.

“These morphometric comparisons serve as a proxy for the breadth of ecologies and predatory behaviors within Mantispidae during different episodes of their evolutionary history,” write the researchers.

Baltic amber deposits preserve history dating back more than 34 million years ago in northern Europe, when the region would have been reasonably warm and temperate. It’s unlikely that inhospitable conditions are the reason that so few mantis lacewings were left for us to discover.

The answer may lie in a trend that the researchers noticed: a decrease in the diversity of mantis lacewing legs since the Cretaceous. It’s possible this points to a more general lack of diversity in the species and a less than abundant population. The diversity of shape in these insects has never really recovered.

Scientists continue to make intriguing discoveries from the time machines that are amber, and it’s not the first time that we’ve been able to learn more about this group of insects, known as Neuroptera, from their remains.

The research has been published in Fossil Record.