By Peter Tchir of Academy Securities

After a few tumultuous weeks, it feels like we finally have the luxury of collecting our thoughts and can sort out this “Market Mess”. We will also evaluate where we are with several key market drivers and how markets are priced and positioned relative to those drivers.

Let’s start with the war in Ukraine. Right now, it seems easiest to break this into what we can see in the near-term and what will potentially happen over the longer-term.

Russia focusing on the Donbass. Russia has lost some ground in and around Kyiv and is even “officially” focusing their attention on the Donbass region. This is the region where Academy’s Geopolitical Intelligence Group initially expected an attack, as they had enough troops for that and there was little doubt as to how the citizens there would react to an invasion. This is also the region where Putin’s view that his forces would be “welcomed” seemed at least plausible. This is good news, especially if it indicates that Russia has reduced its goals in the Ukraine. But it may just be Russia adopting a more achievable long-term plan, i.e., conquer the Donbass and then proceed West with better lines of communication and supply. A positive development, but it does not indicate any imminent ceasefire.

More fear tactics being employed. While Russia seems to be scaling back its operations in terms of where they are focusing their forces, they seem more indiscriminate in their bombing. We have seen some potential escalation in terms of weapons allegedly being used (hypersonic seems likely, thermobaric unclear at best), but it has not escalated to chemical or tactical/ “battlefield” nukes despite U.S. intelligence warnings. Cyber-attacks have also remained focused on Ukraine and have not been used as a widespread tool by the Russians in retaliation for the sanctions. Though, on cyber in particular, Admiral (ret.) Barrett reminds us that Russian hackers are patient and are very good at controlling the “time and place” of their attacks. Given the seemingly decreased scope of Russia’s invasion, the lack of escalation should be a good thing, but the intelligence warnings haven’t stopped and Putin has “surprised” the West with his brutality in the past, so we cannot ignore this risk.

Increasing backlash including from the media within Russia. While a coup of any sort seems highly unlikely, there are signs that the messaging within Russia is becoming moderately less one sided. Whether the snippets that seem negative against the invasion are part of a bigger strategy to identify an “enemy within” or are a sign that discontent is truly growing, we don’t know yet. By now, a month into the invasion, there are families missing loved ones who will start to doubt the official narrative. They will share their grief. That communication will be personal and be outside of what the Russians can control via internet restrictions or a state-run media. The tide continues to turn in Russia against Putin and the invasion, which might be enough for him to start pursuing talks that lead to something that he can claim as peace, which would be very positive.

India is not backing sanctions. This is both a near-term issue and something we need to think about longer-term. Virtually every economic scenario that had the West shifting away from China had a bigger link to India. India, with a political system more akin to ours than China’s and a population growing and getting wealthier (with long-standing competition with China), seemed to be a country we could work well with. While that is still likely true, India’s ongoing purchases of Russian commodities (and Russian weapons), which largely mimics their engagement with Venezuela, should give us some pause. This helps Russia continue its invasion and raises questions for the future.

From a near-term perspective, things seem to be heading in the right direction, but a lot of scenarios including some bad ones, remain plausible.

Almost every geopolitical headline this week seemed to confirm that China is using our sanctions as an opportunity to engage with countries that do not adhere to the political and moral standards we purport to represent.

I believe that regardless of how the war goes, we are seeing an accelerated shift to new alliances that will affect supply chains, the dollar, the yuan, and even foreign demand for our securities. This will not change overnight, but it is something that we need to grapple with and where we need to find our own solutions.

Longer-term there are risks (as we see commodity centric and authoritative regimes work more closely together), but we have an opportunity to reshape our supply chains and business allegiances, which can create some exciting opportunities for growth and jobs.

The Fed, which came across as dovish as possible at their meeting and press conference, has sent out speaker after speaker to hammer home just how serious they are about fighting inflation! I cannot remember a time when the speakers have been so universally in agreement and so quick to hammer home a point that could have easily been hammered home at the FOMC meeting and press conference. Academy had the pleasure of discussing the Fed and rates on Friday’s Real Yield show. I regret not stating out loud whether the Fed “doth protest too much”, but given all the firms calling for more and bigger hikes, it was difficult to fight too hard. It also didn’t help when one speaker started “glitching” and you can see the panic in my face wondering if it was my connection breaking at the worst possible time (similar to what happened during the prior week’s appearance).

I’m less worried about rate hikes, partly because I think that the predictions have become excessive, but I am more concerned (especially near-term), about quantitative tightening.

We cannot have any discussion about anything, whether it is the economy, the Fed, markets, etc., without first looking at oil.

While it is fascinating and even fun (if you are a glutton for punishment) to stare at the first futures contract, that contract swings wildly with supply, demand, storage, speculation, etc. Just like when the front contract went negative, we shouldn’t read too much in to where it is trading today. Yes, it is important, but it is subject to a variety of forces, one of which right now is finding a high enough price where demand destruction occurs. Oil (two years out) is “only” at $80, but it was almost $70 back in November and briefly dipped to $75 last week. 5 year oil prices are even more contained. Both the two-year and five-year markets price in the likely impact of new supply coming on line, which the front contract doesn’t have the luxury of doing.

I expect energy stocks to do well as we initiate plans to build out sustainable AND fossil fuels in the coming months and years, but I’m not getting overly excited by big swings (in either direction) in the front contract.

Oil and energy prices are “bad” but the worst (for the next several years) may be getting behind us as nations adapt to the events of this year.

From Houston two weeks ago, the most common comments were:

Domestically, energy is an opportunity, but not something to keep you awake at night.

Europe has bigger problems, with fewer immediate fixes, and I think that it will contribute to Europe significantly underperforming the U.S.

The government will look for ways to offset the “flat tax” which is how gas prices behave for the ordinary consumer. Expect subsidies of some form to lessen the blow to lower income households. Yes, there is a certain irony in helping sustain demand for one of the products that would benefit from demand destruction, but too many are too dependent on it, and the higher gas prices really do hit lower income households disproportionally hard.

Mortgage applications have dropped 6 of the last 7 weeks!

Yes, housing has been inflationary and will continue to be inflationary in the CPI data (a function of how it is calculated embeds a lag effect), but the real world might see a far different outcome!

I look at housing and cannot help but think we might be fighting the wrong battle at the wrong time!

Financial conditions, while still “easy” are far less easy than they’ve been and with the exception of the pandemic, are more restrictive than we’ve seen since 2012!

What will be the next economic surprise?

Economic data has been surprising to the upside in the U.S. That is great, but the cycle always looks the same:

Yes, economic data could continue to surprise to the upside, but the law of averages and the job requirements of economists could easily cause us to see a reversal of this bullish pattern.

Where On the Curve Are We?

If you thought I was going to discuss the shape of the yield curve here, you are highly mistaken! I’m not that much of a glutton for punishment, yet! Rather, since I’m on a roll with charts that would make a kindergartner appalled at my lack of charting skills, I’m going to do another one.

I find it impossible to believe that we are starting the tightening cycle just as inflation is at the start of an uptrend. I will say it is “possible” that we are in the middle of the inflation rising cycle, but I think it is also possible that inflation has crested. While I don’t think the “scary” scenario is likely, I cannot dismiss it out of hand.

I am clearly not a believer in the soft landing scenario as I suspect we are far enough behind the curve we may have missed the curve entirely.

Now For the Yield Curve

If there was one piece of data I’d like to know right now, it is what are the Chinese, the Saudis, and others doing with their Treasuries?

I’d like to know the tic data in advance, but I think we are at least 6 weeks away from getting data after we imposed our sanctions on Russia’s Central Bank. China (with $1.2 trillion) and the Saudis (with on rates.

I do know that the 7s 10s inversion and the 20s 30s large inversion seem to indicate that liquidity and mandate issues mean more than a well-structured opinion on future yields. With 10s at 2.47%, 20s at 2.74%, and 30s at 2.58% I can do some pretty simple calculations (no convexity, repo, etc., just basic kindergarten level math).

I warned you that it was a simple calculation fraught with all sorts of issues that will be pointed out to me (I’m sure), but it still seems like an incredibly awkward path for rates, which leads me to believe that prices are distorted!

As discussed in “What a Mess” so many correlations seem to have shifted, liquidity seems bad, and the selling seems relentless, so it is extremely difficult to call a bottom here and it is too messy and too early to worry about whether 2s 10s is signaling recession or not (I’ll be lazy and suggest they are starting to hint that we should brace for a hard rather than soft landing).

One positive (for bonds) is that pension fund rebalancing should not be skewed to selling stocks and buying bonds (the 30 year bond is down almost 10% since the start of the month, while the S&P 500 is up 4%).

I’m far more comfortable with credit here versus equities (more on that to come early this week, as I’ve run out of time and space today).

On the balance, I think:

Caution on risk while slightly optimistic the worst of the war is close to being behind us! 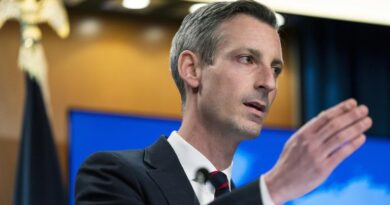 US tells Americans in Russia and Ukraine to leave immediately