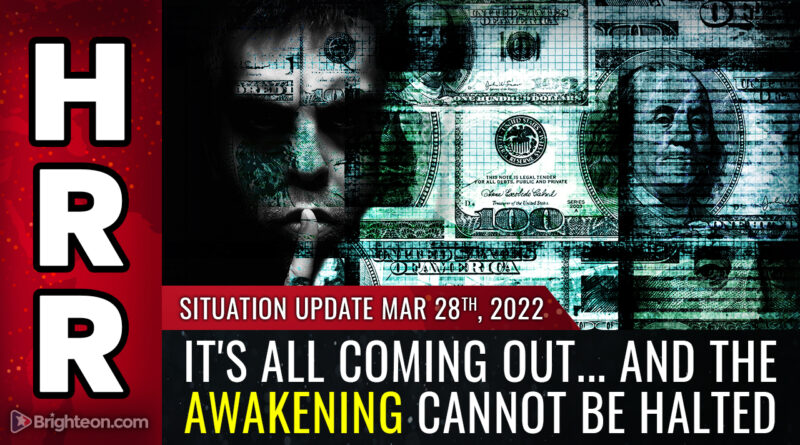 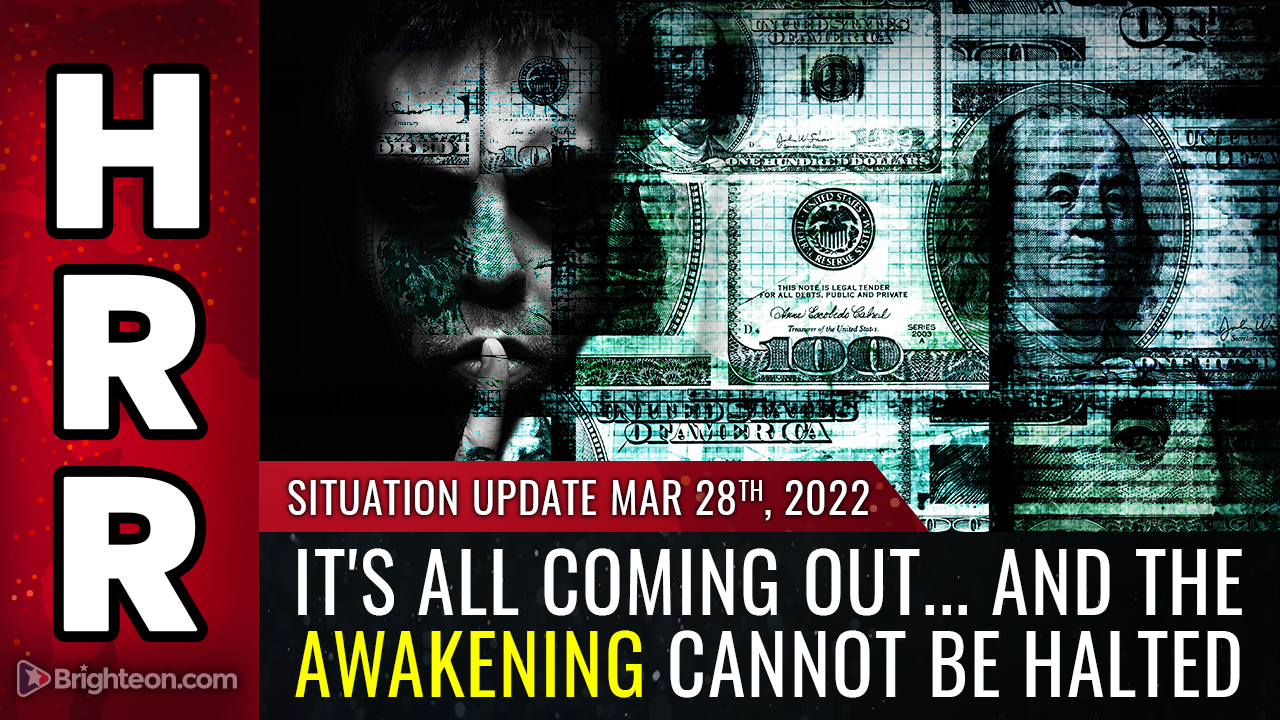 We have received a batch of new intel from US military sources. Although it’s always difficult to sort out fact from fiction, this is a credible source, and previous intel from this source has proven mostly accurate.

According to the information received by this source and then filtered for us (to remove any OPSEC details), there are some bombshell developments under way right now inside the deep layers of the Pentagon and the Biden regime. First, inside the Pentagon and even the intelligence community, there is growing consensus that the Biden regime is rapidly putting America on a path of economic destruction and that it must be stopped from within. Thus, the number of people inside the CIA, FBI, DHS, DoD etc. who are now switching hats — from “black hat” to “white hat” — is rapidly expanding.

What I’m told is that many of these people are of course corrupt, greedy bastards, but there are limits of what they will tolerate. They are opposed to the pedophiles running the Biden regime, for example, and they are fully aware of the child trafficking allegations / evidence found on the Hunter Biden “laptop from Hell.”

In addition, they have a pretty good racket going and they don’t want the racket to collapse. This means they need to stop Biden from completely destroying the US dollar and America’s economic system. In other words, even those who voted for Biden and who are part of the corrupt bureaucracy are realizing that if they don’t stop this madness, they will all be destroyed as America falls. Thus, out of a sense of self-preservation (and in some cases, human decency), they are turning against the cabal and hoping to preserve their positions of power in the process.

I’m told that indictment papers for Hillary Clinton, Barack Obama, Hunter Biden and Joe Biden are already circulating within the intelligence community. All the players are fully aware of the serious crimes of official corruption that have been committed by these people, spanning several decades. The intelligence community influencers are attempting to prepare a way to remove Joe Biden from power, publicly expose the Biden crime family and still maintain some degree of credibility for Democrats in the mid-term elections. If this seems like an impossible task to you, most of the deep state experts also agree. There is no way to expose all this without ripping the credibility of the Democrats (and the controlled media) to shreds, and that’s the main reason why there is internal push back against this strategy.

That’s also why there is a contingent within the deep state that seeks to remove Joe Biden using another method — such as a false flag operation — so that he can be “taken out” and given a hero’s funeral, much like the official funeral of traitor John McCain, who was part of the Russia collusion coup attempt against Trump.

There’s another factor in all this that’s weighing heavily on the FBI, CIA, DHS, DoD and other security agencies, we’ve learned. Biden’s new deal with Iran is going to flood Iran with billions of dollars in fresh cash that will enable Iran to fully fund a wave of radicalized suicide bombers who will be unleashed onto Western Europe by pretending to be Ukrainian refugees seeking protection in the West. Some of these operatives will also sneak into the USA across the open southern border, most likely pretending to be South American. Once in the USA, they can easily acquire the weapons and explosives they need to carry out their murderous tasks of causing chaos and fear across America.

Effectively, Joe Biden is now the world’s No. 1 funding source for radical terrorism in the Middle East. And high-level officials inside the intelligence community are fully aware that Biden’s actions are going to place themselves and their families in danger, given that some of the terrorism targets in the USA are almost certain to include radical Islamic extremists targeting government installations of some kind. (The Pentagon was specifically mentioned in all this, although it’s not clear how any terrorist could threaten the Pentagon building or grounds, given how high the security is around that installation.)

In my own assessment, I tend to believe that terrorists will prefer “soft” targets such as night clubs and heavily attended sporting events, etc., where they believe they can accrue very high casualties due to the density of people in a small space. Think Las Vegas shooting, or the Orlando gay night club shooting from a few years back.

Whatever form it takes, it is verified that the US intelligence community believes Biden’s actions in funding Iran will unleash a new wave of actual terrorism in Western Europe and America. We’re not talking about the fake, staged FBI events like the theatrical kidnapping of Michigan Gov. Whitmer. That was pure theater run by the FBI. What we’re talking about now is actual unbounded violence carried out by well-funded terrorist groups funded by the government of Iran which is effectively funneling Biden’s US money into his terrorism operations.

For these reasons (and others), the decision has been made within the intelligence ecosystem to get rid of Joe Biden. It is only a matter of what means will be used to achieve that goal. It seems likely that the timetable for this would be accelerated by the deep state itself, given how Biden’s disastrous polling numbers are dragging down Democrats’ chances in November like an anchor and chains wrapped around some poor guy’s ankles. Unless something radical changes, the Democrats will lose their House majority, and with it they will lose House investigatory subpoena power which they have used to threaten and intimidate their political enemies since early 2019. (Adam Schiff, anyone?)

The Biden loyalists, of course, are desperately trying to stay in power despite the internal war being structured against them by the intelligence community. Their desired strategy is to escalate the Ukraine conflict into world war with Russia, declare a wartime emergency, cancel the mid-term elections and rule with a totalitarian police state while arresting anyone who dissents by labeling them, “Russian agents of disinformation.” This strategy now looks likely to fail, but there is still a risk that things could escalate quickly in Ukraine and alter the odds.

In truth, there are Russian agents embedded in the Biden White House right now. One of them is a front woman for the media, it turns out. Another prominent figure is the actual architect of Ukraine’s corrupt politics, and whose family came from Russia two generations ago. (Do your homework on Nuland, if you dare…)

The SECRET civil war is already under way

There is a better-than-even chance that Joe Biden will be arrested and removed from power before he can pull the trigger on global thermonuclear war. But there’s also a real chance that he will destroy America before there is enough internal consensus to move against him. What’s clear in all this is that the regime’s war against the American people has shifted focus; now they’re at war with other factions inside the government itself, not merely pro-Trump patriots. They are in effect fighting a two-front war in America.

In effect, we are watching an internal, “secret” civil war unfolding by the day. You can expect all sorts of fireworks from this action, as various factions of the deep state and intelligence community will wage false flags, assassinations, blackmail and staged child trafficking stings against each other. These are some of the most vicious, immoral people on the planet, and they are now unleashing their worst weapons against each other. As a small sample of the kind of thing that goes on, consider this story based on Rep. Madison Cawthorn who reveals what goes on in D.C. in an effort to gather blackmail on officials and elected reps:

Speaking to John Lovell on the Warrior Poet Society podcast, Cawthorn was asked if House of Cards, the show starring Kevin Spacey as the Democratic chief whip and his “secret life of corruption and power and money and perversion,” was anything to close to the reality of what goes on in Washington DC.

Cawthorn said he was astonished at the levels of “sexual perversion” that happen in the nation’s capital.

The House representative from North Carolina added that cocaine and drug use was rife among DC insiders.

We are on a knife’s edge, and the future of America is in real jeopardy

The end result is impossible to predict from the outside, looking in. There’s a chance the good guys pull this off and the Bidens, Clintons and Obamas end up indicted or imprisoned. There’s also a chance that all the people who have a conscience are purged from the system and we end up in a draconian, totalitarian regime ruled by psychopaths and mass murderers.

So interpret this in whatever way suits you best, but do not think the patriots have this in the bag. They don’t. Not yet anyway. Nevertheless, the momentum is on their side, and the more damage Biden does to America’s economic, culture and currency, the more rapidly the “white hats” are gaining friends and allies at every level.