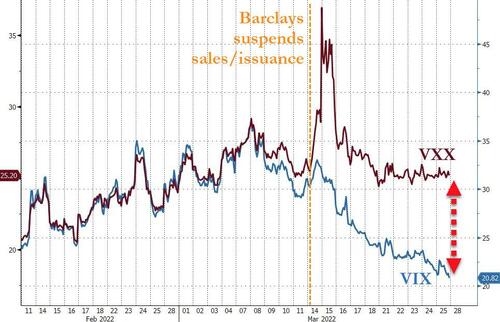 Two weeks ago, Barclays shocked many market participants when it suspended, until further notice, any further sales from inventory and any further issuances of its iPath Series B S&P 500 VIX Short-Term Futures ETN (VXX) – among the most utilized VIX proxies in the market – and its iPath Pure Beta Crude Oil ETN (ticker OIL)

According to a press release at the time, the suspension was because “Barclays does not currently have sufficient issuance capacity to support further sales from inventory and any further issuances of the ETNs.”

But the brief statement left market participants with more questions than answers. Since the suspension, VXX has entirely decoupled from its underlying asset (VIX) and also other VIX-based trackers such as VIXY (but we note that OIL and Crude oil prices remain tightly coupled since the suspension)…

“As part of its structured products business, Barclays Bank PLC (“BBPLC”), a subsidiary of Barclays PLC (“BPLC”), is a frequent issuer of structured notes and exchange traded notes in the United States and elsewhere. These securities are often issued to meet actual and anticipated client demand for such securities.

As The FT reports, a footnote reveals that Barclays had a registered maximum offering size of $20.8bn for its ETNs, and exceeded that by about $15.2bn.

Quite the miss. Those securities now have to be bought back at the original purchase price, and incur the estimated $600 million loss.

“Based on current market prices of the Affected Securities and the estimated pool of potentially eligible purchasers electing to participate in the rescission offer, Barclays expects the rescission losses (net of tax) to be c.£450m…“

The approximate $600 million loss is ‘net of tax’ so is actually a considerably larger hit to the top-line.

Barclays does not expect the loss to materially impact its regulatory capital ratio (which it expected to be in the middle of the 13-14% target range as at 31 March 2022), but it is material enough to delay the beginning of the bank’s buyback program…

“Due to the current proximity to its closed period, the £1bn share buyback programme announced on 23 February 2022 as part of FY21 Results is now expected to commence in Q222 following the publication of BPLC’s Q122 Results Announcement.”

“Barclays has commissioned an independent review of the facts and circumstances relating to this matter including, among other things, the control environment related to such issuances. Separately, regulatory authorities are conducting inquiries and making requests for information.”

We are sure they will get to the bottom of this… and ‘no wrongdoing’ will be discovered. The mystery remains.

Barclays’ errors in issuing structured notes and exchange-traded notes in excess of registered amounts is more a blow to reputation than financials, with half of a near-$600 million hit expected to reverse (hedging) on conclusion of the rescission offer. The deferral of the 1 billion-pound buyback to 2Q from 1Q is disappointing, though again more a sentiment issue than anything fundamental.

The error was called “basic”, “bizarre” and “embarrassing” by analysts, and Barclays said it was investigating the cause and fielding questions from regulators.

“This kind of seemingly basic error may shake confidence in the investment bank going forward,” said Fahed Kunwar, an analyst at Redburn.

“With a new management team in place, there are already questions on the ability of the investment bank to continue to its strong performance.”

And later this morning, Barclays shares are tumbling over 10% following reports that a major shareholder is selling about 575 million shares in a block trade that could fetch as much as 867 million pounds ($1.1 billion). (US ADRs shown below).

The identity of the seller wasn’t disclosed. Barclays’ three largest shareholders are BlackRock, Vanguard and the Qatar Investment Authority, according to Bloomberg data.

So perhaps that “embarrassing” confidence-questioning over-issuance loss in structured notes is now priced in.

As a reminder, Chief Executive Officer C.S. Venkatakrishnan, who took charge of the lender last November, was the group’s chief risk officer at the time the registration document was filed.

How Bill Barr’s Silence Impacted The Outcome Of An Election