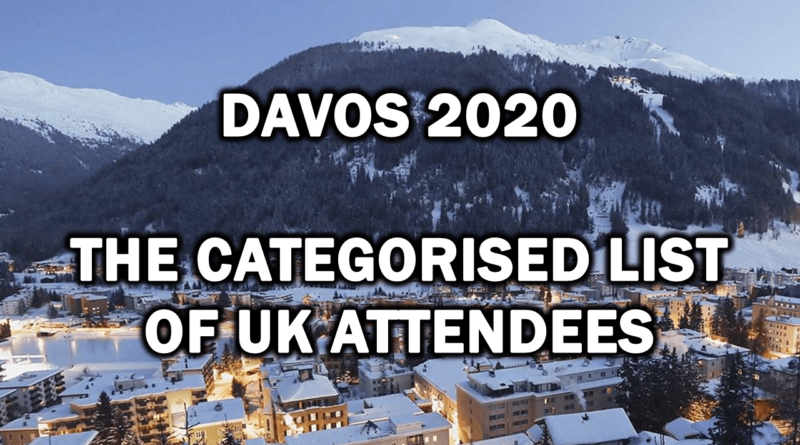 From Goldman Sachs bankers to United Nations bureaucrats, delegates descended on Davos, Switzerland, for the 2020 annual meeting of the World Economic Forum (“WEF”).  However, the WEF publicly released its list of attendees without names of participants and cited the European data-privacy law known as GDPR as the reason for doing so.

Anonymously, the information about attendees was submitted to Quartz who then published it in February 2020.  And the information received contained more detail on attendees than Quartz had ever seen and revealed, in ways never before disclosed, how the WEF catalogues and categorises the global “elites.”

Davos has a way of separating even the global “elite” into strata.  Participants’ relative importance is made known through the colour and design of their name badge. The hierarchy of attendees is also enumerated, with more nuance, in WEF’s databases. Participants are put into categories numbered from one to seven—an indication, of sorts, of how senior or perhaps important a delegate is to the business world.

Nearly every person attending is assigned one of these “position levels.” Those listed as ones are labelled things like “Top Executive” or “Head of State.” Twos are labelled in positions like “Senior Executives” and “Deputy Head of State.” Central bankers are level three. Level four includes country officials in a sub-ministerial post. Local government officials are level five. People in honorary positions are level six. Level seven is for those classified as “Functional Staff.”

You can search the 2,784-person list of attendees by name, position or country on Quartz’s website HERE.

Filtering the list for the United Kingdom, there were 264 attendees on the list published by Quartz.  Below we have attached a list of these UK attendees.

Gordon Brown, who was UK prime minister from 2007 to 2010, was listed as “6-Public Sector Expert.”  Tony Blair, who preceded Brown and is now executive chairman of the Tony Blair Institute for Global Change, was “1-Academia/Think-tank.” David Cameron, Brown’s successor, was “1-Top Executive” (he was at the forum as president of Alzheimer’s Research UK).

The current UK prime minister, Boris Johnson, was not on the list. He stayed away from Davos 2020 and banned most other ministers from attending, telling them they should be focused on delivering for the people of the UK.

Read more: What is Davos, who can go and why has Boris Johnson banned his Cabinet from attending?

However, Sajid Javid, the then Chancellor of the Exchequer and current Secretary of State for Health, did attend. He was designated as only mildly important “Level 3-Minister” by WEF. A lower designation than UK corporate media editors and journalists.

The 10 “Level 1-Editor-in-Chief” in attendance were:

The 27 “Level 2-Journalist” in attendance were:

March 29, 2022It’s All Falling Apart for The Biden Family as Hunter Biden Is Linked to Funding of Ukraine Biolabs

During the teenager’s inquest, which opened on 22 March at Sheffield’s Medico …

March 28, 2022The horrors of the Social Credit System; which is on its way to the UK

A few years ago, in a book called The Game’s Afoot (published …

March 28, 2022Did the US Fund Biolabs in Ukraine for biodefence or biowarfare?

According to Russian officials, the US government has been financing and helping …

March 28, 2022Official Data in the UK, Canada & NZ, suggests the majority of the Triple Vaccinated are developing a new form of Acquired Immune Deficiency Syndrome

March 27, 2022Covid Injection Under the Microscope: A New Zealand Microbiologist Presents His Findings