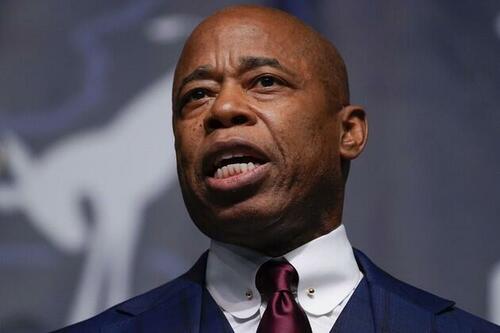 Following a seemingly unceasing stream of fatal subway shovings, daytime shootings and audacious examples of shoplifting that have forced many storefronts in NYC to move closing time earlier so their employees don’t feel threatened during their nightly commutes back home, there’s no denying the surge in crime that has befallen the Big Apple has made life far more difficult for its inhabitants.

And as crime becomes the paramount political issue of the day, it’s no wonder that Mayor Eric Adams, a former NYPD captain, decided to speak out against this new scourge during Sunday’s annual NYPD Holy Name Society communion mass and breakfast, pledging that he would be the “wartime general” who would lead NYC back to a state of order and stability, according to a New York Post report.

“There are wartime and peacetime generals. I’m a wartime general,” he said. “I’m going to be on the front line. Those of you in transit, I’m in the subway system at 2, 3 a.m. with you. I’m going to your precincts. I’m going to call you up when you make those arrests.”

Since the start of the pandemic (and indeed, for years beforehand), America’s largest city has been transformed into a “laughingstock”, Adams said.

“Anything goes in the city of New York…the most important city on the globe has become the laughing stock of the globe. And the dysfunctionality of our city has cascaded throughout the entire country. And the audacity that someone comes along and says, ‘I want to be your mayor,’ and simply says, ‘follow the rules, follow the rules.'”

Highlighting a spate of shootings that injured a pair of small children last week, Adams proclaimed that “it’s just not OK to leave a daycare center with your baby and hear gunshots, or walk across Kings Highway with your 7-year-old and hear shots.”

In a city still reeling from Mayor de Blasio’s ‘defund the police’ push, Mayor Adams urged members of the NYPD to “ignore the noise” coming from social media.

“Don’t let anyone break your spirit, tell you that New Yorkers don’t love the men and women of the NYPD,” the mayor said. “Everywhere I go they say, ‘Protect our police.’ Ignore the noise. Ignore Instagram, social media. Facebook.”

To help illustrate the consequences of this city-wide crime spree, Adams resorted to a classic metaphor of the frog in the pot, who is slowly boiled to death because they can’t feel the effects of the slowly rising heat.

“Let’s acknowledge that the heat is being turned up,” he said. “We want to turn it down so we don’t watch our city boil to death.”

Outside of NYC, the Empire State is being beset by a different type of crime: the white-collar crime and corruption typical of Democrats in the state (which is still reeling from seeing two of its most powerful legislative leaders jailed on corruption charges, and its longtime governor ousted for lying about deaths in the state’s nursing homes, and for allegedly sexually harassing a coterie of women.

The most recent incident involves NY’s Lieutenant Governor, Brian Benjamin, who is facing subpoenas in an investigation into whether he knowingly funneled fraudulent campaign contributions into his 2021 campaign for comptroller, according to Fox News.

It reminds us of another old saying: a fish rots from the head down.