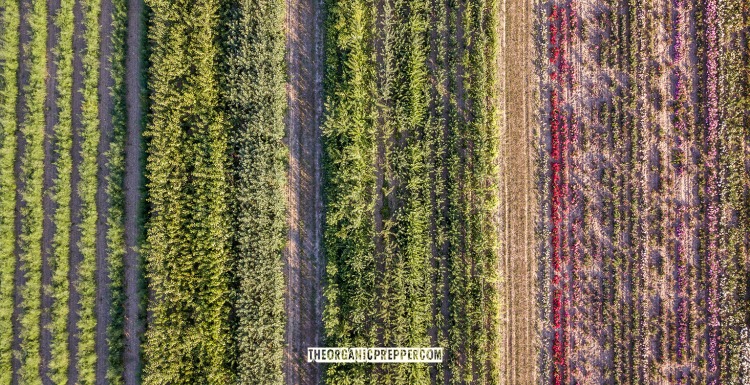 It’s getting to be that time of year, at least in the Northern Hemisphere: garden planning! Drawings are made, seeds are being started, in warmer areas plants are either in the ground or soon will be. And intercropping can help you to be as efficient with your garden space as possible.

Not only does this ultimately boost your food production, but it keeps your plants healthier as well. So, just what does intercropping entail? Let’s take a look.

Intercropping is the practice of planting two crops in proximity to one another, thereby producing more food on the same piece of land. Common examples include planting a short crop with quick maturity, such as radish, along with a tall crop with longer time to mature, such as tomato or corn. The radish matures and is harvested before the tomato grows tall enough to shade it out. This is different from succession planting, where we harvest one crop, then plant another.

What are the types of intercropping?

There are actually a couple of different types of intercropping. They are:

What are the benefits of intercropping?

Nobody engages in intercropping solely because it looks pretty (well, maybe some do). The reason that intercropping is used is because of its benefits. Here are the top three reasons you may want to consider intercropping in your summer garden this year.

Resource partitioning: This involves taking advantage of the differing needs of the crops. You don’t want crops competing with each other for space, nutrients, water, or light. Examples of this include planting a deep-rooted crop along with a shallow-rooted one, or planting a tall crop next to one that requires partial shade.

Mutualism: Three Sisters planting would be an example of this, as is companion planting. We plan our plantings for the mutual benefit of both, such as giving structural support to climbing plants and adding nitrogen fixers to the mix, both of which are done in Three Sisters planting. Marigolds and nasturtiums keep pests away from a number of crops, including broccoli, cauliflower, tomatoes, and cucumbers.

You can download a free Companion Planting Matrix from our friends at Seeds for Generations that will give you a helpful reference to know what crops to plant next to each other, and which ones to keep apart.

Pest management: Certain companion plantings, such as marigolds and nasturtiums noted above, help repel pests from cucurbits and brassicas. Trap cropping is another method: planting a sacrificial plant to keep predators away from the plants you want. One example is planting a deer salad well away from the greens you want for your own table. Cherry tomatoes, for example, are very attractive to both stink bugs and leaf-footed bugs.

(With increased harvest with intercropping, you’re going to want a way to preserve everything. Check out our free QUICKSTART Guide to home canning to help.

Of course, nothing in Nature is free.

Intercropping tends to require more management and poses special problems in crop rotation, most notably in the area of timing. Weather will complicate matters, and both mulching & cover crops may be a bit less effective.

One thing to consider when planning our intercropping is taxonomic family. We don’t want to plant things together that come from the same family, for example tomatoes and potatoes, because they have similar nutrient needs and attract similar pests.

Also in this example, both are fairly tall and take the entire season to mature. Both prefer bright light, so tomatoes can easily shade out your potatoes, and that’s not what we had in mind! Tomatoes have a deep root structure while potatoes produce their tubers underground in a spreading fashion. For that reason, there will be competition for the soil space that can result in lower yields for both crops. Again, not what we had in mind!

A side benefit here would be weed suppression. There’s no room for weeds to grow while the short TTM crops are developing, and by the time you harvest those, the tomatoes are well enough developed to shade out the weeds.

Another great example is planting between your cabbage & cauliflower, since these take a long time to develop, allowing time to grow short-maturity items such as greens and herbs between them. The examples are endless, but I think I’ve made my point here.

As discussed above, avoid using plants from the same taxonomic family.

Want some tips on intercropping?

This should give you a good baseline for getting started in intercropping this summer.

As discussed above, tall crops such as tomato and corn can be used to provide the partial shade that other plants prefer. Trellised squashes, cucumbers, and melons can also be used in this way.

Three Sisters utilizes this strategy. The corn grows tall and provides structural support for the pole beans, while the beans enrich the soil for corn, a heavy feeder. Squash grows along the ground acting as a mulch and helping deter marauding animals interested in the corn and beans. As discussed above, root crops work really well here.

Ultimate Proof: Covid-19 Was Planned to Usher in the New World Order

Report on Military Operations From Donbass