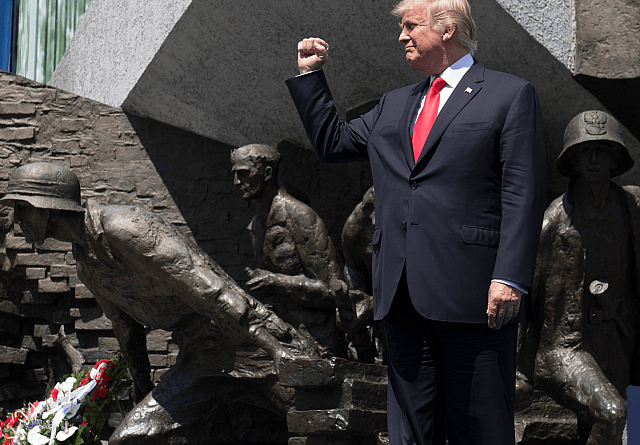 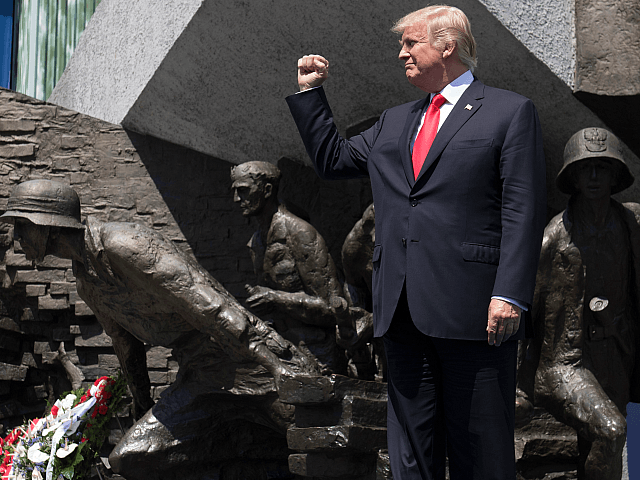 President Joe Biden delivered a speech in Warsaw, Poland, on Saturday that is being hailed by supporters for its tough stance on Russia, and derided by critics for the fact that Biden suggested Russian President Vladimir Putin be removed from power.

The White House walked back Biden’s provocative gaffe. That did not stop Biden’s defenders in the media from proclaiming his speech to be the boldest since Ronald Reagan stood in Berlin and declared: “Mr. Gorbachev, tear down this wall!”

There is ongoing debate about whether Biden should have cast the conflict in Ukraine as a clash between democracy and dictatorship. Regardless, what the pro-Biden pundits forget is that long before Biden declared in Warsaw that “the West is now stronger and more united than it has ever been,” President Donald Trump gave an address in Warsaw that called on the West to unite against Russia and other threats to western “civilization.” And for that, he was called a racist by the media.

President Trump had chosen Poland as the site for his speech because of its importance on the front lines of the rivalry between NATO and Russia. He declared to the world:

We are fighting hard against radical Islamic terrorism, and we will prevail. We cannot accept those who reject our values and who use hatred to justify violence against the innocent.
Today, the West is also confronted by the powers that seek to test our will, undermine our confidence, and challenge our interests. To meet new forms of aggression, including propaganda, financial crimes, and cyberwarfare, we must adapt our alliance to compete effectively in new ways and on all new battlefields.

We urge Russia to cease its destabilizing activities in Ukraine and elsewhere, and its support for hostile regimes — including Syria and Iran — and to instead join the community of responsible nations in our fight against common enemies and in defense of civilization itself.

For daring to defend “civilization” and the West, Trump was pilloried as an extreme nationalist at best, a white supremacist at worst.

As Breitbart News reported at the time:

Left-wing pundits reacted angrily to President Donald Trump’s speech in Warsaw, Poland, on Thursday, accusing him of racism for defending the “West.”

Peter Beinart, writing in The Atlantic, asserted: “The West is a racial and religious term.” He added: “To be considered Western, a country must be largely Christian (preferably Protestant or Catholic) and largely white.”

Jeet Heer, at the New Republic, called Trump’s address an “alt-right” speech in a commentary titled: “An International Brotherhood of White Grievance.” He likened Trump’s ideas to those of Pat Buchanan, adding: “Such rhetoric is meant to conjure blood-and-soil nationalism. Here, Trump is defining the West not based on ideals like democracy and liberty, but atavistic loyalties to territory and shared kinship.”

The Washington Post‘s Eugene Robinson was somewhat more restrained, deriding Trump for portraying history “as a zero-sum clash of civilizations in which ‘the West’ can triumph by imposing its will.”

He suggested that Trump had adopted an outdated, imperialistic perspective: “The speech Trump delivered Thursday in Warsaw’s Krasinski Square might have been appropriate when Britannia ruled the waves and Europe’s great powers held dominion over “lesser” peoples around the globe. It had nothing useful to say about today’s interconnected world in which goods, people and ideas have contempt for borders.”

Meanwhile, Biden is being praised by the media for saying what Trump said — and doing so after Russia has already invaded a pro-western European country.

Had the media actually listened to what Trump said about the need to unite in defense of the West, rather than projecting their racial obsessions onto him, perhaps the West would have been prepared for the challenge. 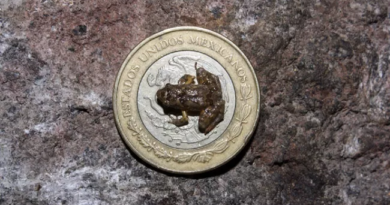 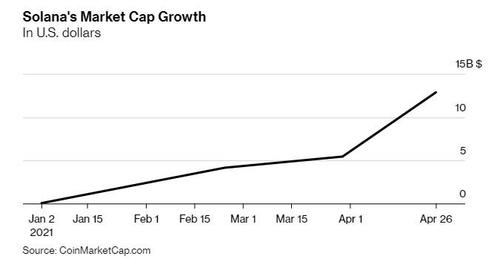 Ukraine is a sacrificial pawn on the Imperial Chessboard