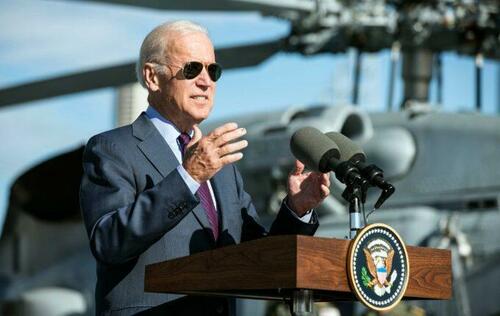 Rebuffing progressive lawmakers’ calls for Pentagon spending cuts, President Joe Biden on Monday is set to unveil a budget blueprint for the next fiscal year that includes a record $813.3 billion in funds for the U.S. military apparatus, a $31 billion increase from the current level.

The president’s Fiscal Year 2023 budget request, which must be approved by Congress, is expected to contain $773 billion for the Pentagon alone as well as billions in funding for the Energy Department’s maintenance of the country’s nuclear arsenal.

The New York Times reported Monday that Biden’s funding request for the Pentagon—the only federal agency that has not passed an independent audit—will “include $4.1 billion to conduct research and develop defense capabilities, nearly $5 billion for a space-based missile warning system to detect global threats, and nearly $2 billion for a missile defense interceptor.”

According to Bloomberg, the White House is urging Congress to approve $145.9 billion for procurement, funding that will allow the military to purchase “61 F-35 jet fighters from Lockheed Martin Corp., fewer than previously planned, as well as… the B-21 bomber from Northrop Grumman Corp. and two Virginia-class submarines from General Dynamics Corp. and Huntington Ingalls Industries Corp.”

The president’s latest budget proposal will land on Capitol Hill amid Russia’s deadly invasion of Ukraine, which has thus far proven to be a major boon for the U.S. weapons industry as the Biden administration pours arms into the besieged country.

“The hawks in Washington want to jack up the military budget and use Ukraine as an excuse,” William Hartung, a senior research fellow at the Quincy Institute for Responsible Statecraft, argued in a recent interview on Democracy Now!, noting that Biden’s new military budget request amounts to $100 billion more than was spent at the height of the Cold War, adjusted for inflation. Such a massive military budget increase, Hartung warned, “is only going to benefit weapons contractors and members of Congress who receive campaign contributions from them.” Politico details:

There is an additional $682 million for Ukraine, “to counter Russian malign influence and to meet emerging needs related to security, energy, cybersecurity issues, disinformation, macroeconomic stabilization, and civil society resilience,” according to a budget document.

In a statement on Monday, Hartung said that “spending to address the Ukraine crisis can be more than readily accommodated under current Pentagon spending levels.”

NEW: White House budget will ask for s $6.9 billion for the European Deterrence Initiative, and $682 million to assist Ukraine https://t.co/AdXrUEPeOp

“The Pentagon budget is replete with examples of waste and dysfunction that must be addressed before going on a new spending spree,” he added. “This includes dangerous or unworkable systems like the F-35 combat aircraft and the new intercontinental ballistic missile (ICBM). Add to this the routine contractor practice of grossly overcharging the Pentagon for spare parts and the steep cost overruns on major systems, and there is room to cut tens of billions of dollars from the Pentagon budget without diminishing our security.”

In his budget request for the current fiscal year, Biden asked for $753 billion in military spending and Congress ultimately approved $782 billion, an indication that lawmakers could add to the president’s new $813 billion proposal. Last week, Reps. Barbara Lee (D-Calif.) and Mark Pocan (D-Wis.)—the co-chairs and founders of the Defense Spending Reduction Caucus—warned Biden that dumping more money into the Pentagon’s overflowing coffers “will continue to starve our domestic priorities of needed funding.”

In recent days, the Biden administration has had to begin shutting down key coronavirus pandemic response programs due to GOP obstruction of new funds. Meanwhile, Republican lawmakers—and some hawkish Democrats—have clamored for more Pentagon funding amid Russia’s assault on Ukraine.

“Some of our colleagues will continue to seek virtually unlimited amounts of funding for the Department of Defense, no matter the department’s own assessments of its needs for the coming fiscal year. This mission creep is dangerous to peace-seeking efforts,” Lee and Pocan wrote in a letter to Biden. “Diplomacy and international aid will suffer, as will our
response to the largest threats currently facing the nation, the ongoing global pandemic and climate change.”

Yifat Susskind, executive director of the global women’s rights organization MADRE, argued Sunday that “endless military spending isn’t giving us security: it’s robbing our communities of the resources they need to be secure, like healthcare and green energy.”

US gives Ukraine $ 2 billion worth of free weapons to fight Russia.

From just 4 of 25 US arms manufacturers! pic.twitter.com/27R1AYcO5h

“We’re being robbed of resources,” Susskind added, “to feed the endless hunger of the military-industrial complex.” 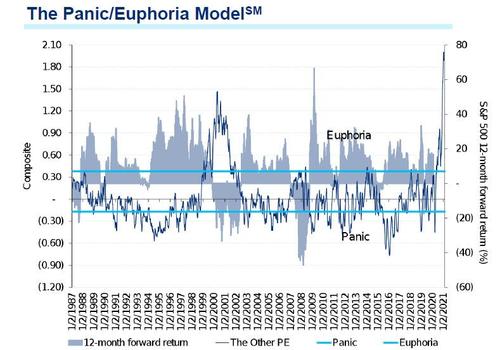 “6 Months For A Regime Change”: Why One Strategist Believes The Market Will Crash In The Second Half Of 2021