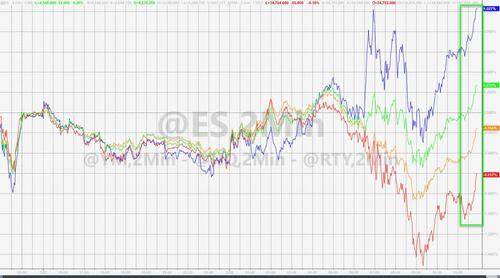 The FT reports, according to four people briefed on the discussions, Russia is no longer requesting Ukraine be “denazified” and is prepared to let Kyiv join the European Union if it remains militarily non-aligned as part of ongoing ceasefire negotiations.

The draft ceasefire document does not contain any discussion of three of Russia’s initial core demands – “denazification”, “demilitarisation”, and legal protection for the Russian language in Ukraine – the people added.

And the market seems to be happy that the nazis can stay?

And Gold is getting monkeyhammered lower…

Russia “can’t and won’t talk about progress” because “it could only harm the negotiating process”, Dmitry Peskov, Putin’s spokesman, was quoted by Interfax on Monday.

“For now, unfortunately, we cannot speak of any significant achievements and breakthroughs”, he added.

As part of the agreement under consideration, again citing sources, The FT reports that Ukraine would also refrain from developing nuclear weapons, or hosting foreign military bases in addition to abandoning its pursuit of Nato membership.

We have to say we find this hard to believe and can only think that Ukraine must be ‘offering’ plenty in return – perhaps giving up The Donbas and allowing the land-bridge to Crimea to remain?

Scotland: A Second Letter to MSP on How the Government Abuses the General Public