A confidentiality agreement shows potential coronavirus vaccine candidates were transferred from Moderna to the University of North Carolina in 2019, nineteen days prior to the emergence of the alleged Covid-19 causing virus in Wuhan, China.

And now further evidence suggests the American pharmaceutical and biotechnology company that has made billions through the sale of said experimental injection, is actually responsible for creating the SARS-CoV-2 virus.

The confidentially agreement which can be viewed here states that providers ‘Moderna’ alongside the ‘National Institute of Allergy and Infectious Diseases’ (NIAID) agreed to tranfer ‘mRNA coronavirus vaccine candidates’ developed and jointly-owned by NIAID and Moderna to recipients ‘The Universisty of North Carolina at Chapel Hill’ on the 12th December 2019.

The agreement was also signed by two representatives of the NIAID, one of whom was Amy F. Petrik PhD, a technology transfer specialist who signed the agreement on December 12th 2019 at 8:05 am. The other signatory was Barney Graham MD PhD, an investigator for the NIAID, however this signature was not dated.

The final signatories on the agreement were Sunny Himansu, Moderna’s Investigator, and Shaun Ryan, Moderna’s Deputy General Councel. Both signautres were made on December 17th 2019.

All of these signatures were made prior to any knowledge of the alleged emergence of the novel coronavirus. It wasn’t until December 31st 2019 that the World Health Organisation (WHO) became aware of an alleged cluster of viral pneumonia cases in Wuhan, China. But even at this point they had not determined that an alleged new coronavirus was to blame, instead stating the pneumonia was of “unknown cause”.

It was not until January 9th 2020 that the WHO reported Chinese authorities had determined the outbreak was due to a novel coronavirus which later became known as SARS-CoV-2 with the alleged resultant disease dubbed COVID-19. So why was an mRNA coronavirus vaccine candidate developed by Moderna being transferred to the University of North Carolina on December 12th 2019?

The same Moderna that have had an mRNA coronavirus vaccine authorised for emergency use only in both the United Kingdom and United States to allegedly combat Covid-19.

Could it have something to do with the fact that Moderna may actually be responsible for creating the Covid-19 virus?

On February 23 the Daily Mail ran an article showing that Moderna has patented the 19 base letter (nucleotide) sequence which codes for the Furin Cleavage site in Covid-19.

They cited a Paper by Scientists in India, Switzerland, Italy and the US (cautiously entitled: MSH3 Homology and Potential Recombination Link to SARS-CoV-2 Furin Cleavage Site) in which they calculated that the chances of a 19 nucleotide sequence patented by Moderna randomly appearing in Covid-19 in circumstances where it does not appear anywhere else in nature are 1 in 3 trillion.

So in effect, Moderna had developed the 19 nucleotide gene sequence containing the Furin Cleavage Site which gives Covid-19 its infectivity to humans by patented gain of function research as early as 2013, 6 years before the Wuhan outbreak took place. Not 3 years, as reported in the Mail and virally elsewhere.

The final codon completed inserted gene sequence, ‘CTCCTCGGCGGGCA’, patented by Moderna, does not exist in natural viruses and neither does the CGG coded Furin Cleavage site CCTCGGCGGGCACGT.

Therefore, the only way for bacterial DNA to end up in a virus is by human intervention. So the Covid-19 virus must have been man made.

We published two previous articles on this subject in March 2022 that contain much more scientific detail on the subject at hand. You can read Part One here, and Part Two here. Part Two contains the complete method of using the BLAST database for you to fact check this for yourself. 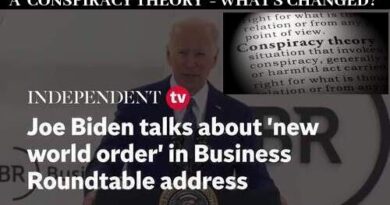 For Decades, The Globalists Called What Joe Biden Just Said A ‘Conspiracy Theory’ – What Changed? Biden’s Unspoken Words: ‘They Have To Destroy The Old World Order To Bring In The New’