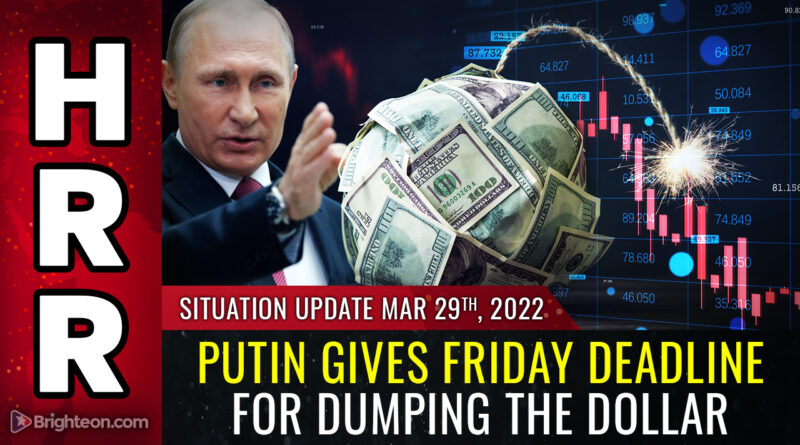 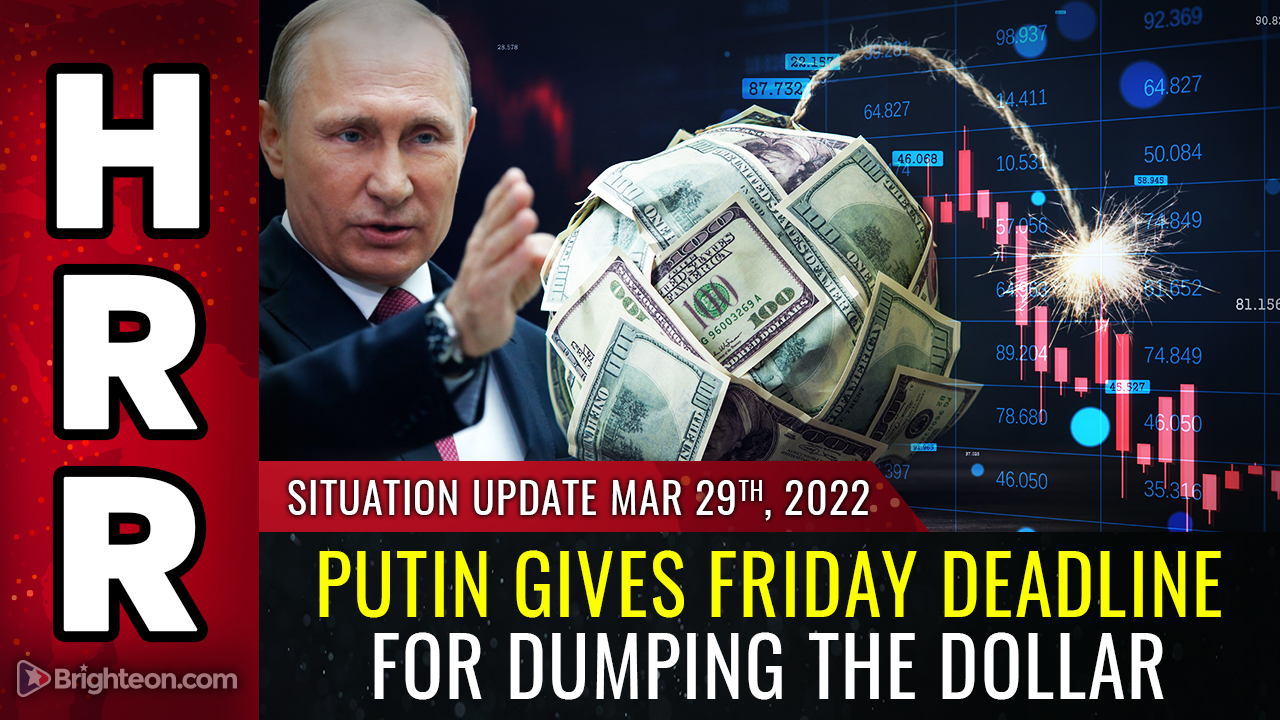 Regardless of what you think about Putin’s morals or ethics, he is a genius strategist whose intellect is vastly superior to Joe Biden’s. Putin latest move threatens the very future of the dollar (fiat) currency and may spell the beginning of the end for the dollar.

Beginning this Friday, Russia will only accept rubles, gold or bitcoin as payment for energy exports to “unfriendly” countries. No dollars or euros will be accepted. And why should Putin accept dollars or euros anyway, given that the western financial system has told Putin he can no longer use dollars or euros to purchase anything.

As a result, Putin is demanding rubles, gold or bitcoin. And that means the Russian ruble is now backed by commodities exports, making it a currency backed by something real. If you buy rubles, in other words, you can trade those rubles for natural gas or oil.

In a video posted to social media, Putin blasted the “theft” of Moscow’s resources and mocked the notion that first-world currency reserve holders are “reliable.”

“Let me reiterate, the whole global economy and trade have suffered a major blow, as did the trust in the U.S. dollar as the main reserve currency” of the world, the Russian leader says in a translated clip.

“The illegitimate freezing of some of the currency reserves of the Bank of Russia marks the end of the reliability of so-called first-class assets,” he added. “In fact, the U.S. and EU have defaulted on their obligations to Russia. Now everybody knows that financial reserves can simply be stolen.”

He added: “And many countries in the immediate future may begin — I am sure this is what will happen — to convert their paper and digital assets into raw reserves of raw materials” such as “land, food, gold, and other real assets.”

Putin predicting dollar and euros demise and everyone moving to “real reserves of raw materials” like “land, food, and gold”


Astute economic analysts foresee a world coming soon which will once again be dominated by hard currencies like gold and silver, as well as other precious metals, in addition to physical assets like land and food because paper fiat currencies and ‘virtual’ currencies like bitcoin are not just increasingly unreliable, they can be — as Putin said — simply stolen from the owner as if they never really belonged to someone else.

If Putin enforces the new requirement this Friday, the future of money is instantly transformed… and the dollar no longer enjoys currency supremacy

The point in all this is that if Putin enforces his demand of accepting only rubles, gold or bitcoin for energy exports, the dollar instantly loses significant utility in the world. Those nations that wish to buy energy from Russia — which includes most European nations — will need to first buy rubles, then trade rubles for energy. This gives rubles instant commodities backing.

The dollar, meanwhile, is bring printed by the trillions and controlled by a cabal of criminal banksters and corrupt government officials who think money comes from nowhere. Every nation around the world must now be pondering the obvious question: Do you bet on dollars which are backed by nothing other than a bunch of pedophile lunatics and criminal hucksters that run America’s corrupt government and clueless central bank? Or do you bet on rubles which are backed by gold, commodities and energy that every country needs?

The answer becomes rather obvious. Rubles have a future; the dollar does not. At least not with current economic policies in place. This could change quickly if someone like Trump were to come back into office, but until that day comes, the dollar is being systematically destroyed. And with it, the future of America is being rapidly eroded by the day, ultimately leaving the American people impoverished. From there, the riots will be unstoppable.

Today’s Situation Update podcast covers all this in more detail:

Lab-Leak, Gain-Of-Function, and the Media Myths Swirling Around the Wuhan Institute