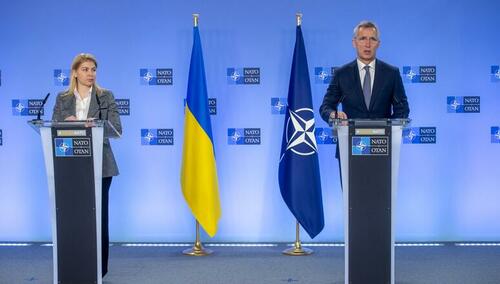 After much back-and-forth between Western capitals and Russia Tuesday and Wednesday over the Kremlin’s declared troop draw down from Kiev and Chernihiv, NATO Secretary-General Jens Stoltenberg has definitively weighed in on Thursday, saying that Russian forces are not withdrawing but regrouping.

The NATO chief further echoed prior Washington declarations that Moscow is not negotiating in good faith, also after Kiev charged that the whole draw down aspect to Tuesday’s Istanbul negotiations was but a tactical ploy for more time to extend battlefield actions and aggression.

“According to our intelligence, Russian units are not withdrawing but repositioning. Russia is trying to regroup, resupply and reinforce its offensive in the Donbas region,” Stoltenberg said to reporters in Brussels.

In the past days Russia’s military has made no secret about focusing its efforts on liberating the Donbas, which was presented in Western media as a new shift in scope of the Russian war effort.

Stoltenberg expressed that this could mark a further escalation and not a draw down: “At the same time, Russia maintains pressure on Kyiv and other cities. So we can expect additional offensive actions, bringing even more suffering,” he said in the Thursday comments.

Affirming that NATO countries will continue to resupply Ukraine’s military with weaponry, Stoltenberg concluded, “We have no real change in the real Russian objective… they continue to pursue a military outcome.” Ukraine and its backers have meanwhile speculated that Russia pulling some forces back from near Kiev is due to the fierceness of the Ukrainian resistance and also lack of Russian preparedness.

“Officials voiced scepticism over Russia’s sincerity and commitment towards the peace talks, underlining that only a full ceasefire, troop withdrawal and return of captured territory to #Ukraine would be enough to trigger discussions on lifting sanctions.”https://t.co/E3fsIsKI2M

Russian Deputy Defense Minister Alexander Fomin had announced Tuesday immediately on the heels of the “constructive” Ukraine-Russia ceasefire talks hosted by Turkey that the military would “drastically” scale down its presence and operations near the Ukrainian capital.

The Russian side cited an “increase mutual trust” at the negotiating table, also as Ukraine reportedly committed to staying out of the NATO alliance among other concessions.

Putin: Ukraine Has Become A ‘Puppet Regime’ of NATO & the West

(Reader: TruthIsUnbreakable) Those Who Blame us as if We are the Problem