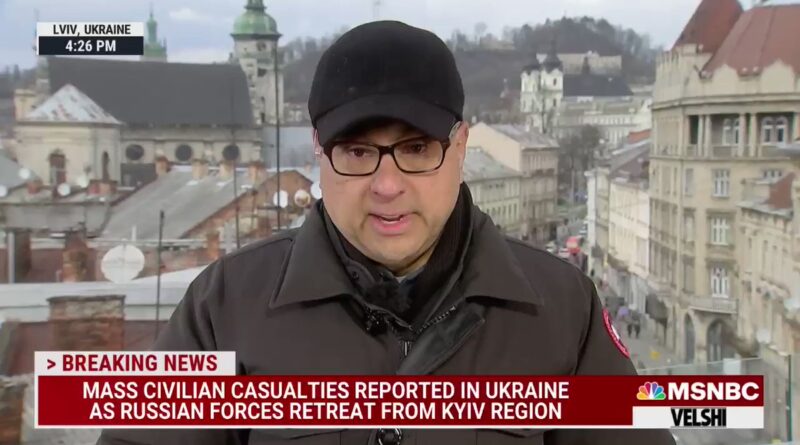 In an appearance on the MSNBC show Velshi, The Modern War Institute’s John Spencer explicitly advocated direct US military conflict with Russia due to allegations of war crimes in the Ukrainian city of Bucha.

“I’m ready to commit at this moment — unlike I was before this day — to put people in direct contact with Russia, to stop Russia,” Spencer said. “Call it peacekeeping. Call it what you will. We have to do more than provide weapons. And by ‘we,’ I mean the United States. Yes, we’ll do it as a coalition with lots of other people, but we are the example. So put boots on the ground, send weapons directly at Russia.”

Notice the bizarre verbal gymnastics being used by Spencer to obfuscate the fact that he is advocating a hot war with a nuclear superpower: “put people in direct contact with Russia,” “send weapons directly at Russia”. Who talks like that? He’s calling for the US military to fire upon the Russian military, he’s just saying it really weird.

To be clear this isn’t just some arms industry-funded think tanker saying this; The Modern War Institute is part of the Department of Military Instruction for the United States Military Academy, which is operated directly by the Pentagon.

Asked by the show’s host Ali Velshi what he thought of warnings that direct military confrontation with Russia could lead to nuclear war, Spencer said, “It is a huge risk, I understand that. But today is different.”

Velshi himself was much more to the point than his guest, both online and on social media.

“We are past the point of sanctions and strongly-worded condemnations and the seizing of oligarchs’ megayachts,” Velshi told his MSNBC audience. “If this is not the kind of moment that the United Nations and NATO and the UN and the G-20 and the Council of Europe and the G-7 were made for, what was the point of these alliances if not to stop this? The world cannot sit by as Vladimir Putin continues this reign of terror.”

“The turning point for the west and NATO will come when the sun rises over Kyiv on Sunday, and the war crimes against civilian non-combatants becomes visible to all,” Velshi said on Twitter over the weekend. “There is no more time for prevarication. If ‘never again’ means anything, then this is the time to act.”

Asked what specifically he meant by this, Velshi clarified that he was advocating “Direct military involvement.”

“Lines have been crossed and war crimes have been committed by Putin that make direct military intervention something NATO now must seriously consider,” Velshi added.

“Who is the Vice President of the United States?” 😂