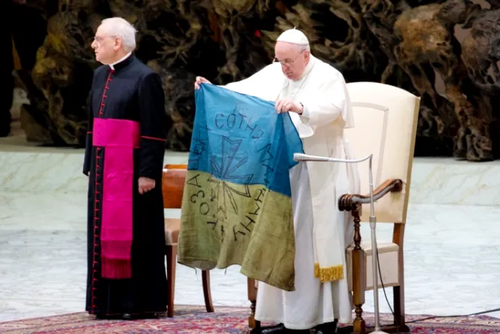 Pope Francis during his weekly Wednesday audience condemned what he called “the massacre of Bucha” and kissed a Ukrainian flag he was given, in the firmest statements he’s issued thus far in the war – which is a clear condemnation of Russian actions.

“Recent news from the war in Ukraine, instead of bringing relief and hope, brought new atrocities, such as the massacre of Bucha,” Francis told a large audience in the Vatican, while welcoming Ukrainian refugees on the stage.

“Stop this war! Let the weapons fall silent! Stop sowing death and destruction,” the Pope stated in his address. Directing remarks to a group of Ukrainian refugees in the audience, he added: “These children had to flee in order to arrive in a safe land. This is the fruit of war. Let’s not forget them and let’s not forget the Ukrainian people.”

“They are victims whose innocent blood cries out to heaven and implores an end to this war. Let us silence the weapons, let us stop sowing death and destruction,” the Pope added.

Ukrainian President Volodymyr Zelensky has said over 300 civilians were killed – many which he said had their hands tied behind their backs and were tortured – in an event which triggered more EU and US sanctions this week.

Both Russia and China have rejected the Western narrative, with Moscow describing it as a false flag which occurred when Russian troops weren’t present in the town and as Ukrainian forces retook it. China has urged that facts on the ground need to be independently verified before accusations are made – though the foreign ministry called images coming out of Bucha “deeply disturbing”.

A Kremlin spokesperson on Wednesday turned the accusations around, saying it was the “Kiev regime” responsible for slaughtering civilians in Bucha, in order to draw in direct NATO military support. According to state media, Maria Zakharova said:

“There is so much evidence of the innocence of the Russian side that we should close this topic,” Zakharova said, noting that the discourse should be changed into “directly accusing the Ukrainian regime and all those assisting it.”

She referenced the “Bucha fake” and said the West wants and open and shut case without any examination of evidence. At the same time the Kremlin has said the West is ignoring instances of Russian troops being tortured by Ukraine forces.

“The discussion in the UN Security Council showed that our Western colleagues shied away from analysing the flagrant inconsistencies in the footage from Bucha that was shown by their media”, Zakharova said. “They were not going to discuss anything from that footage, they simply made their accusatory statements and wanted to close the topic.” 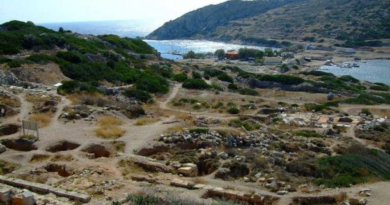 “We Are On The Precipice Of A Global Food Crisis,” Goya Foods CEO Warns