Just moments after we warned that a European embargo on Russian coal would send already record coal prices surging even higher since Russia is such a critical supplier to Europe and since the world will have to find more expensive trade routes to satisfy the new, post-Ukraine reality…

… the European Union agreed to ban coal imports from Russia in its first move targeting Moscow’s crucial energy revenue as part of Europe’s fifth round of sanctions.

The sanctions package, which also includes a ban on most Russian trucks and ships from entering the EU, was signed off by the bloc’s diplomats Thursday, Bloomberg reported citing people familiar with the matter. It was also coordinated with the U.S. and the U.K.

While the bloc had held back from hitting Russia’s energy sector in previous sanctions rounds after Germany and Hungary blocked the move given their reliance on Russian fossil fuels, some member states had continued to push for further measures on Russian energy imports and oil in particular, with countries due to discuss ideas like an escrow account to freeze additional profits driven by oil price rises since the start of the war.

Bloomberg reports that EU nations sparred over the length of the phase-in period for the coal ban, as well as a growing list of exemptions to proposed trade bans before agreeing to the overall package, according to people familiar with the matter.

“Time is working against Europe because we’re losing our credibility by paying money to Russia, by helping it fight against Ukraine,” Lithuanian Foreign Minister Gabrielius Landsbergis told Lithuanian journalists in Brussels on Thursday, LRT reported.

The bloc will also strengthen its export control measures, with further restrictions on key technologies such as cloud computing and LNG equipment. European Commission President Ursula von der Leyen said earlier this week the action on coal would amount to 4 billion euros ($4.4 billion) a year. Companies would be allowed a few months to wind down contracts before they’d be banned from entering new ones, according to two people familiar with the matter.

…  and as the reality of even higher coal prices seeps in…

… expect much more upside for these evil “fossil fuel” companies. 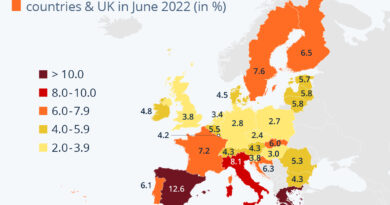 The State Of Unemployment In Europe