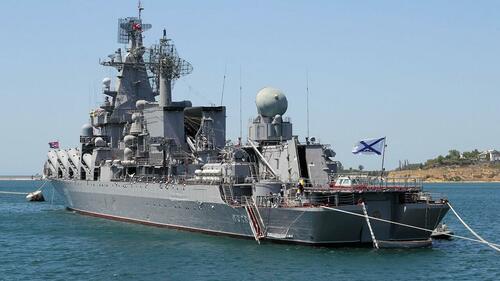 Russia has for the first time published footage of the rescued crew members of the sunken missile cruiser Moskva, two days after it was reportedly hit by Ukrainian anti-ship missiles – in a major blow to the Black Sea fleet.

State-run TASS described that Russian Navy chief, Admiral Nikolai Yevmenov, met with the crew. Russian ships in the area off Odessa had reportedly rushed to evacuate the crew of over 500 as it was on fire Thursday.

First footage of the rescued Moskva crew in Sevastopol. No information yet regarding casualties pic.twitter.com/OSSOVHHNg2

Some 100 sailors were seen on a parade ground at the Crimean port of Sevastopol, but it remains unclear when the event took place.

Russia has so far not acknowledged that the crew suffered any casualties, and rejected the Ukrainian version of events, saying instead that a blaze broke out on board and set off munitions. After the crew was safely evacuated, according to the Kremlin’s version, the ship sunk in stormy weather as it was being towed to port.

Moscow said all of the 500 crew members were rescued after the April 13 blast. Ukrainian officials said some of those on board the ship had died. Neither side has provided evidence to support the claims.

The U.S. military agreed with the Ukrainian version of the ship’s sinking.

The Pentagon later said that “We assess that they hit it with two Neptunes” – in reference to statements from Ukraine’s southern military command.

There has still been no imagery published of the ship on fire or sinking – though it’s believed that the Ukrainians might have had a drone in the sky observing the damage. US intelligence might also have overhead drone imagery – but there’s still been nothing in the way of definitive proof confirming either side’s precise version of events.

But when the Russians belatedly confirmed that the Moskva was destroyed and sank, this was widely taken as confirmation that the Ukrainian version is likely accurate. It was considered the Russian Navy’s flagship of the Black Sea fleet.

What Is Stagflation And Why Has The Establishment Been In Denial About It?