With the Fed now telegraphing to markets that a 50 bps rate hike in two weeks is in the bag, moments ago the latest Fed Beige Book validated the cheerful economic outlook, noting that based on information collected  before April 11, 2022, US economy activity expanded at “moderate” (no longer “modest”) pace with several Districts reporting “moderate employment gains despite hiring and retention challenges in the labor market.” At the same time, with Covid now a long-gone nanny state nightmare consumer spending accelerated among retail and non-financial service firms, as virus cases tapered across the country.

The report also notes that manufacturing activity was solid overall across most Districts, but the usual suspects – supply chain backlogs, labor market tightness, and elevated input costs – continued to pose challenges on firms’ abilities to meet demand. Worse, the Beige Book also noted that demand destruction from soaring prices is starting to emerge, and notes that “contacts in a few Districts noted negative sales impacts from rising prices. Firms in most Districts expected inflationary pressures to continue over the coming months.”

Some other highlights from the report:

Looking at labor markets, employment increased at a moderate pace. Demand for workers continued to be strong across most Districts and industry sectors. But hiring was held back by the overall lack of available workers, though several Districts reported signs of modest improvement in worker availability.

Perhaps most importantly, the Beige Book notes that “some contacts reported early signs that the strong pace of wage growth had begun to slow.” This will surely bolster the “peak inflation” thesis.

Meanwhile inflation, of course, remains the big problem, with the report noting that inflationary pressures remained strong since the last report, with firms continuing to pass swiftly rising input costs through to customers.

The big highlight, however, is that as noted above, several districts noted negative sales impacts from rising prices.

Finally, looking ahead don’t expect a big drop in inflation: firms in most Districts expected inflationary pressures to continue over the coming months.

Elsewhere, several months of improvement (i.e. reduction) in mentions of shortages, recall that the March Beige Book saw a modest deterioration, with “mentions” of shortage rising from 55 in January to 60 in March. Well, not so much in April, when the word “shortage” was used just 52 times, the fewest since April of 2021.

However, the easing in shortages was more than offset by a surge in what is a clear proxy for inflation. As shown below, as shortages are easing, what is rising is, well, “rising” – yes the word “rising” was used no less than 57 times, almost double the 32 times in March, and – usually in the context of prices or joblessness – indicates that things are getting worse, not better.

Finally, here are the highlights by Federal Reserve District

The full report can be found here. 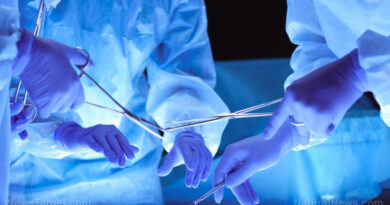 Some Chinese “surgeons” are executioners who extract the beating heart of LIVING patients (for profit, of course)