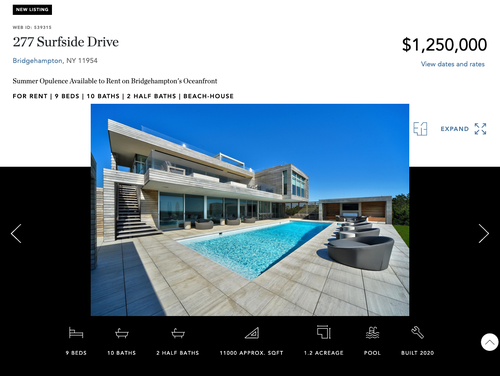 Hamptons is a playground for Wall Streeters during the summer months. Luxury rentals on eastern Long Island are going for big bucks, with some listed for more than $1 million a month, a bet hybrid work and big bonuses will continue to attract financial elites for the third consecutive year, according to Bloomberg.

After two years of surging demand for mansions in Hamptons as city dwellers moved to beach towns and rural communities, inventory in the area is tight and has driven up rental prices. The question this year is if mega-mansions overlooking the ocean can sustain more than a million dollars per month.

There are a few beachfront properties that demand an absurd amount of money. For example, 277 Surfside Drive in Bridgehampton is described as having “heroic views,” it recently lowered its rental prices for July from $1.5 million to $1.25 million. Down the street, 155 Surfside Drive has an asking rate of $1.65 million for July.

Corcoran Hamptons broker Susan Breitenbach said those beachfront properties “were a little bit over-inflated … They certainly can rent. Whether they get exactly that amount of money, we’ll see.”

During the pandemic, Manhattanites fled to the Hamptons as their ability to work from home allowed them to relocate. It wasn’t until last summer, the super-rich were back partying in the beach town.

Homes not on the beach were also pricey. A farmhouse in Bridgehampton, described as one of the best homes in horse country, had an asking rental price of $1.2 million for July to Labor Day.

Breitenbach said high rental prices were due to a post-COVID surge in demand for homes, thus reducing inventory. She even said off-season demand was elevated.

In a talk with clients, Breitenbach said they were sticking with their asking prices but are feeling out the market and are willing to negotiate.

“Those owners got a lot of money last year, so they are feeling out the market and keeping the same pricing.

“But I think people do have, this year compared to last year, a few more options. People are starting to travel again,” she said.

Data from AirDNA, a rental analytics company, shows rental prices in the Hamptons between May and September are up 22% from 2018 to 2021.

Though AirDNA said bookings are declining, the number of nights booked for rentals has slid 34% compared with last summer.

“Asking prices are up but there are still reductions on rentals, proof that landlords may be overreaching coming out of two hot years,” said Judi Desiderio, CEO of Hamptons brokerage Town and Country.

Desiderio explained high rental prices are due to a lack of inventory after Hamptons became a hotbed for city dwellers who bought homes. This took supply off the rental market as people wanted more permanent homes. 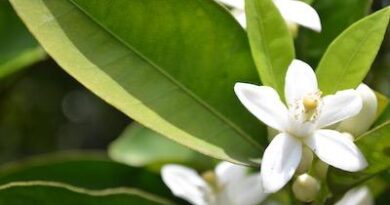 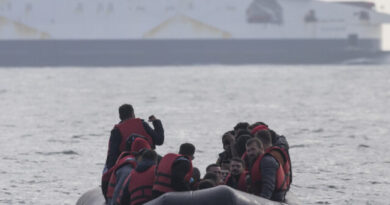