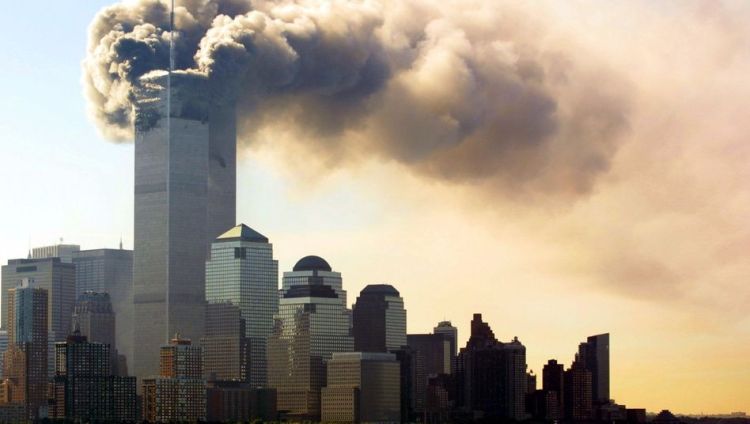 by Matthew Ehret, The Unz Review:

A little over 20 years ago, North American Aerospace Defense Command (NORAD) conducted a military exercise that involved a “hypothetical scenario” of hijacked planes flying into both the Pentagon and the World Trade Center.

One year later, on October 24-26, 2000, another “hypothetical” military exercise was played out featuring an airline crashing into the Pentagon killing 341 people followed by yet another May 2001 Department of Defense “hypothetical scenario” which saw hundreds of medical personnel training for a “guided missile in the form of a hijacked 757 airliner” crashing into the Pentagon.

What arose from the smoke and debris of September 11, 2001 was unlike anything the sleeping masses or international community expected.

The shock effect so traumatized the masses that quite suddenly, citizens found themselves willing to give up their liberties at home while acquiescing to any retaliatory action desired by their government abroad. The scale of horror was so great that the international community banded together and showed their love and solidarity towards America in the wake of the tragedy with candlelight vigils across Asia, the Middle East, Africa, Russia and South America. Humanity’s natural tendency to embrace and aid our fellow man in times of crisis expressed itself like a bright light in a world of confused darkness and a hope for a durable peace awoke in the hearts of many.

Alas, as the world came soon to discover, that hope was short lived.

The Neocon Takeover of America

Police State measures grew swiftly with Ashcroft’s Patriot Act of 2001. It is a mistake to call this Ashcroft’s bill however as none other than Joe Biden pointed out that his 1995 Omnibus Terrorism Bill drafted in the wake of the first WTC bombings was the origin of the Ashcroft variant. Biden felt no shame stating publically “I drafted a terrorism bill after the Oklahoma City bombing. And the bill John Ashcroft sent up was my bill.”

While a new type of regime change war was created abroad, dangerous protocols for Cheney’s “Continuity of Government” were set into motion and with these procedures, new mandates for Martial Law were created amplifying the powers, financing and deployment of U.S. military capabilities both within the USA “under crisis conditions” and around the world. It didn’t take long for citizens to begin recognizing stark parallels to the earlier Nazi-run inside job of 1933 when the German Reichstag was burned down and blamed on the communists.

Governments that had no connection to 9/11 were swiftly targeted for destruction using false evidence of “yellow cake” produced in the bowels of MI6, and a broader unipolar military encirclement of both Russia and China was set into motion which President Putin called out brilliantly in his famous 2007 Munich Security Conference Speech.

Of course this should not have been a surprise for anyone who took the time to read the Project for a New American Century manifesto published in October 2000 entitled Rebuilding America’s Defenses’ (RAD).

Under the Chairmanship of William Kristol and co-authored by John Bolton, Richard Perle, Dick Cheney, Robert Kagan, Paul Wolfowitz, Elliot Abrams, and Donald Rumsfeld, RAD stated that to “further the process of transformation, even if it brings revolutionary change, is likely to be a long one-absent some catastrophic and catalyzing event- like a new Pearl Harbor”. Going further to describe its Hobbesian agenda, the cabal stated that “the Cold War was a bipolar world; the 21st century world is- for the moment at least- decidedly unipolar with America as the world’s sole superpower”.

While much has been said about the “inside job” of 9/11, a lesser appreciated terrorist act occurred over several weeks beginning on September 18, 2001 killing five and infecting 17 in the form of envelopes laced with bio-weaponized anthrax.

The Age of Bioweapons and PNAC

This anthrax attack led quickly into the 2004 Bioshield Act with a $5 billion budget and mandate to “pre-empt and defend further bioweapon attacks”. This new chapter of the revolution in military affairs was to be coordinated from the leading bioweapons facility at the Medical Research Institute of Infectious Diseases at Fort Detrick. Since 2002, over $50 billion has been spent on Bioweapons research and defense to date.

The earlier October 2000 RAD document emphasized the importance which the neocon cabal placed on bioweapons (and other next generation war tech) stating: “Combat will likely take place in new dimensions: In space, cyber-space and perhaps the world of microbes… advanced forms of biological warfare that can “target” specific genotypes may transform biological warfare from the realm of terror to a politically useful tool”.

Lawyer and bioweapons expert Francis Boyle stated in 2007 that Fort Detrick’s mandate includes “acquiring, growing, modifying, storing, packing, and dispersing classical, emerging and genetically engineered pathogens for offensive weapon programs.” These new post-9/11 practices fully trashed the 1975 UN Convention Against Biological Weapons ratified by the USA by establishing a vast international network of bioweapons labs coordinated from Fort Detrick which would be assigned the role of doing much of the dirty work that the U.S. was “officially” prevented from doing on its own soil.

Where Hitler used the burning of the Reichstag to justify his enabling Acts, the neocons had their 9/11. The difference in the case of America was that Cheney failed to achieve the same level of absolute control over his nation as Hitler captured by 1934 (evidenced by pushback from patriotic American military intelligence circles against Cheney’s Iran war agenda in 2007). With this neocon failure, the republic lurched on.

The Rot Continues Under Obama

Obama’s rise was seen as a hopeful light to many naïve Democrats who still had not realized how a “false left” vs “false right” clash had been slowly constructed over the post WWII years. Either camp increasingly found itself converging towards the same world government agenda through using somewhat dissimilar paths and flavors.

It didn’t take long for many of Obama’s more critically-minded supporters to realize that the mass surveillance/police state measures, regime change wars, and military confrontation of Russia and China begun under Cheney not only failed to stop, but even expanded at faster rates than ever.

In the months before Obama left office in July 2016, the classified Directive 40: National Continuity Policy was enacted creating a line of “Devolution authority” for all branches of the government to a “duplicate chain of individuals secreted outside Washington available in a catastrophic emergency”. Days prior to Trump’s inauguration, Federal Continuity Directive 1 was issued to transfer authority to military forces who could be used to suppress “insurrection, domestic violence, unlawful combination or conspiracy.”

The Importance of Knowing This History

There are very clearly two diametrically opposing methods of analyzing, and solving the existential crisis threatening our world currently: Multipolar or Unipolar.

While Russia and China represent a multipolar/pro-nation state vision driven by large scale development projects that benefit all- rich and poor alike exemplified by the New Silk Road, Polar Silk Road and Space Silk Road something much darker is being promoted by the same financial oligarchy that owns both right and left sides of the deep state coin. These latter forces have provably positioned themselves to take control of western governments under crisis conditions and are not afraid to use every weapon in their arsenal to destroy their perceived enemies… including ethnic-targetted pathogens generated in any number of the Pentagon’s global array of 300+ biolabs. This latter uncomfortable reality was asserted days into the launching of COVID-19 in January by leading officials of Iran and even the Chinese Foreign Ministry.

Our Broken Media and What To Do About It