by Cameron Keegan, All News Pipeline:

(ANP: It’s quite disturbing to us that so many people think that ‘free speech’ should only be ‘speech’ that THEY THEMSELVES agree with! With us now witnessing this VERY DANGEROUS trend from both the left and the right, this excellent new story sums up our feelings perfectly. As a side note, if anyone reading this story decides to visit our comment section below to ‘weigh in‘, please understand that the Disqus commenting system ALLOWS YOU to CENSOR any comment/commenter that you do not agree with. Please DO NOT ask ANP to censor other commenters. We are NOT the speech police. The information at this link explains exactly how to BLOCK any commenters you might disagree with. Thank You. And God Bless.)

While younger Americans are finding ways to engage in much-needed discourse outside mainstream platforms, we must develop resilience to accept the consequences of free speech.

The freer a nation, the harder it is for that nation’s government to suppress the voice of its people. On this note, the First Amendment is our best defense against the government—and the most effective weapon against tyranny and totalitarianism.

Protecting the heart of the First Amendment means guarding the flow of ideas and inviting discussion around those ideas. The biggest misunderstanding about the First Amendment is that it protects individuals against what they might consider offensive language and harmful ideas spurred by their fellow citizens.

For example, permitting freedom of expression or “free speech” most definitely gives rise to ideas deemed hurtful toward specific demographics of the public. Supporters of “speech regulation” argue that speech they define as “hateful” is comparable to inciting physical violence. Yet, regulating speech around not offending someone will consequently lead to the ultimate demise of American society.

When we’re receiving passive-aggressive comments or downright harsh words, it is not unusual to become upset and feel rejected, particularly from those we seek acceptance. It’s also not uncommon to feel outraged and start conjuring thoughts of revenge.

It is this kind of intense, emotional response that has plagued colleges for several years now, inspiring protests to ban speakers perceived as hate-mongering or divisive, leaving their ideas unchallenged.

The problem is that the outrage and offense taken are incompatible with dispassionate reasoning.

An agreement following a dialogue that results in fraudulent activity is not a form of speech that someone can choose to ignore, as might be the case with experienced “hate speech.” There is no better way to regulate such speech than to ban it entirely; it is a lawless act described objectively in clear terms, which can deny an individual of their livelihood and property.

Sadly, many are advocating against their own interests by arguing for regulating speech interpreted as discriminatory. Allowing the government to control speech by banning speech deemed hateful by a group of—wait for it—experts would set a dangerous precedent. The problem is that permitting the government to engage in restricting free speech is an abomination to the First Amendment.

Advocates of speech regulation would contend that hate speech can be clearly defined as “public speech that expresses hate or encourages violence towards a person or group based on…race, religion, sex, or sexual orientation.”

Well, how is hate speech defined, and who strictly gets to define hate speech? Many of us cynical skeptics would say it’s whatever Apple, Google and Facebook say it is on a given day or, more to the point, whatever the powers-to-be with overriding influence on these mammoth bigger-than-government companies say it’s going to be. 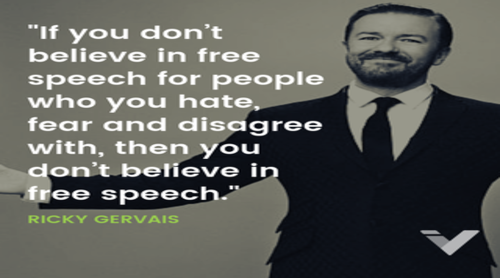 Hate speech does not equate to physical violence

As we experience it, hate speech can be very unpleasant to sensitive beings. Yet, as unkind and displeasing the nature of hate speech, it is not physical violence.

To those of us who hear words spewed from a place of ignorance or hostility, it might be challenging to differentiate such language from actual physical violence, especially when feeling emotionally distraught. Some would even argue that the pain felt might lead us to self-harm or seek revenge.

But when someone punches us in the face, it’s almost impossible to ignore them and keep walking without experiencing another punch, right?

Unlike the act of physical violence, hate-ridden words will do as much damage as we allow. And some will indeed struggle more than others. We can block a particular user, ignore or strategically argue with that co-worker who keeps backstabbing and challenge someone’s rhetoric, assuming they’re open to listening.

The risk of equating physical violence to hate speech is that violence itself may become a justified response. For example, suppose someone feels provoked enough to lash out at the wrongdoer spewing hate speech and then declares that such a reaction is justified towards the perpetrator.

Considering the case of Brandenburg vs. Ohio (1969), the Supreme Court examined whether a Ku Klux Klan speaker was convicted adequately under an Ohio criminal syndicalism law. The Court established that speech advocating illegal conduct is protected under the First Amendment and put forward a test: (1) speech can be prohibited if it is “directed at inciting or producing imminent lawless action” and (2) it is “likely to incite or produce such action.”

Nowadays, out of caution, an ex-boyfriend might receive a knock on the door from the cops if he threatens to harm his former girlfriend on social media.

Let us play a spade as a spade. Currently, in America, major cities have been awash with demonstrations and protests. But when a public speaker with a libertarian or conservative disposition promotes ideas that many find offensive, are we going to conclude the speaker is engaging in hate speech and have their voice restricted?

In China, harshly criticizing the Chinese Communist Party can reduce someone’s social credit score, depriving them of transportation benefits, or even be made to ‘vanish’ depending on the severity of the criticism. In Russia, playing Pokemon or reposting a video to raise awareness of the ills of child abuse can get someone arrested.

Every justification for surrendering freedom will knock off another brick from the framework of American civilization.

“Disease X”: Prepare For Another Pandemic

COVID Passport Microchip Developer: Chipping of Humans Happening ‘Whether We Like it or Not’