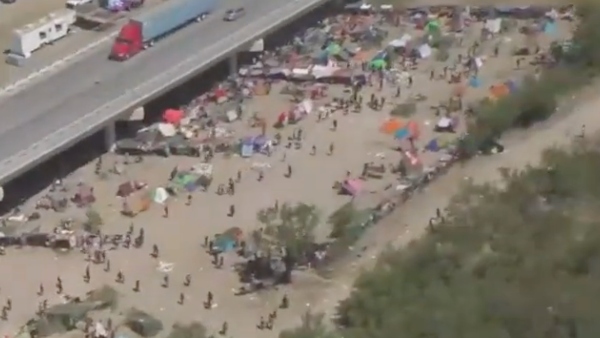 (Natural News) Democrats and Republicans have implored the Biden regime not to end Title 42, a Trump-era pandemic rule authorizing the immediate deportation of the vast majority of migrants who cross the border illegally.

But since flooding our country with third-world poor who will overwhelm local governments and lead to further empowerment of the power elite in Washington is part of the deep state’s plan to wreck America, naturally, those pleas have fallen on deaf ears.

Last week, the Centers for Disease Control and Prevention’s director, Dr. Rochelle Walensky, dutifully played her role and ordered the rule rescinded on May 23. And of course, predictably, hundreds of thousands of migrants already poised to rush the U.S. border once the rule ended are now making final preparations to cross illegally.

One official in a Texas border community, Ulvalde Mayor Don McLaughlin Jr., warned in an interview with Fox News that a tsunami of humanity is heading for America, thanks to Biden’s open borders policies.

McLaughlin said he is expecting his community to face a 75-to-100 percent increase in the number of illegal aliens officials in Uvalde will have to deal with, and of course, the regime doesn’t care.

“We’ve been dealing with this crisis for the last year,” he said, in reference to a massive number of illegal aliens that have crossed into the U.S. — and been allowed to stay — since Biden was installed as president.

McLaughlin went on to say he can’t even describe what he believes is coming to the border in just a few weeks.

“What’s coming on the 23rd of May won’t even be describable,” the mayor said. “I mean, you’re talking about thousands of people that are going to hit that border, that are just waiting to cross the border.

He’s talking about several measures Abbott announced last week that include chartering private buses and sending illegal migrants to Washington, D.C., for Biden and his Democrats to deal with — a number of new actions his administration plans to take in expanding Operation Lone Star, a state effort to curb illegal immigration.

“With the Biden administration ending Title 42 expulsions in May, Texas will be taking its own unprecedented actions this month to do what no state in America has ever done in the history of this country to better secure our state, as well as our nation,” Abbott said.

“To help local officials whose communities are being overwhelmed with hordes of illegal immigrants who are being dropped off by the Biden administration, Texas is providing charter buses to send these illegal immigrants who have been dropped off by the Biden administration to Washington, D.C.,” Abbott noted.

“We are sending them to the United States capital where the Biden administration will be able to more immediately address the needs of the people that they are allowing to come across our border,” he continued.

The GOP governor also announced “enhanced public safety inspection of vehicles” crossing from Mexico into Texas at ports of entry.

“Those two strategies are in addition to announcing the following actions to further deter illegal immigrants, including deploying boat blockades at appropriate regions in the Rio Grande River, deploying razor wire at low-water crossings in high traffic areas, creating container blockades to drive people away from low water crossings,” Abbott said, indicating that he will be announcing additional measures soon.

Biden isn’t going to enforce border laws and maintain the integrity of our boundaries, so it’s going to be left up to states to do so, the federal government be darned.

Peter Schiff: The Fed’s Ego Is The Only Thing Bigger Than This Bubble

What Are the Benefits of Hyperbaric Oxygen Therapy?