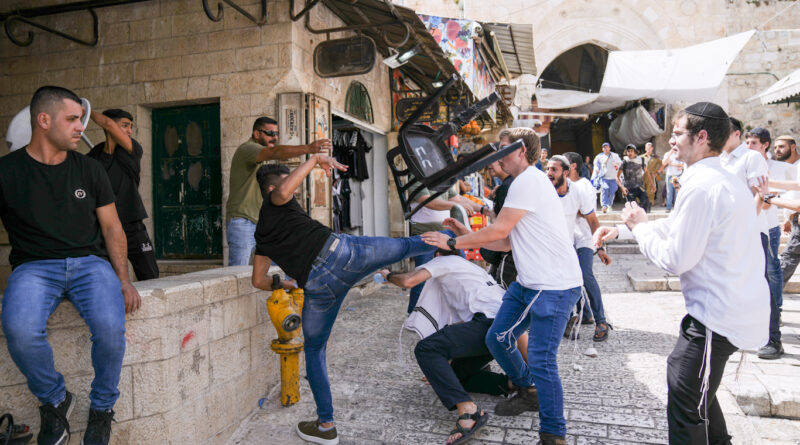 JERUSALEM – It is sometimes easier to see things from a distance, especially when talking about Palestine, where tragedies follow each other with unbelievable speed. There is no time to recover from one tragedy before two or three more occur, all initiated by Israel with its all-powerful military and then justified or buried by various branches of Zionist groups around the world.

The Dance of Flags, sometimes called the Flags March, takes place in Jerusalem each year around the beginning of June. In 2022 it was preceded by the targeted killing of Al Jazeera journalist Shireen Abu Akleh and the assault on her funeral procession, followed by the killing of several more young Palestinians. The decision to carry out the ethnic cleansing of Masafer Yatta in the South Hebron Hills took place around the same time, yet not a moment of thought is given to the fact that there is a war going on.

The March of Flags in Jerusalem was an act of war. Israeli assaults on Jenin are an act of war. The displacement of the residents of Masafer Yatta is an act of war. And this is counting only the events that took place in the last few weeks.

Anyone who has witnessed the Dance of Flags firsthand in Jerusalem can attest to the fact that this is, without a doubt, a parade of terror. The thousands of young Israelis get excited for the moment when they enter the Old City of Jerusalem through the Damascus Gate so that they can pound on the doors of Palestinian businesses and terrorize the Palestinians who reside in the Old City.

Each year the organizers of this racist hate parade go through the formality of negotiating with the Jerusalem police regarding the specific route of the march. Every year the police and other government agencies charged with security say that the request to enter the Old City via Damascus Gate is a dangerous idea. And every year the March proceeds as planned through Damascus Gate. Being the masters of the land and wielding a great deal of political power, the organizers of the Dance of Flags always get their way.

In Arabic, the Damascus Gate is called Bab el-Amoud, or the Gate of the Pillar. Apparently, in early times there was a large pillar in front of the gate on the inside. Generally, one can tell a great deal about a city just by paying attention to its gates. For example, when entering the Old City via Jaffa Gate and going down into the souk, one sees shops catering to tourists; and, in fact, most tourists and Israelis enter through there. It is considered a more “friendly” part of the Old City. The shops carry all sorts of Judaica, yarmulkes, menorahs and even IDF t-shirts.

When entering from Damascus Gate, one sees fewer tourists. Mostly Palestinians walk through it and the shops sell things that people actually need for their daily lives. Vegetables, bread, sweets, clothes and shoes. The shops that do carry items for tourists carry mostly kaffiyas and items like t-shirts that emphasize Palestine and show the Palestinian colors. The non-Palestinians walking the street down from Damascus Gate are usually hardcore Israeli settlers, who have taken over some of the homes along the road, and soldiers.

It is a straight shot walking from Damascus Gate to the al-Aqsa Mosque, and to the Western Wall – or the Kotel – plaza. The plaza used to be the Mughrabi neighborhood of the Old City. Palestinians live and have businesses in that part of the city, but settlers are targeting and taking homes there at an alarming rate. The homes that have already been taken by settlers are clearly marked and easy to spot. First, a heavy door with a bolt is placed at the front of the home. You don’t see the Palestinian homes with doors like that. An intercom is put in place and very often an armed security guard stands regularly by the door.

A large Israeli flag is displayed on the building, usually hanging from the second story balcony. It is very often that these apartments are right above shops that are still owned and operated by Palestinian merchants who suffer greatly from the settlers’ presence. As one shopkeeper whose store I frequent often said to me once, “Ma fi awsakh minhum” – no one is worse than them.

An act of war

According to the “Law Insider” website, an act of war is defined as follows:

Another example of a definition is:

Act of war means hostile or warlike action, whether declared or not, in a time of peace or war, whether initiated by a local government, foreign government or foreign group, civil unrest, insurrection, rebellion or civil war.

The Flags March held in Jerusalem each year falls under these definitions. It is an invasion of the Old City by a mob large enough to be a small army; it is a riot; it is civil commotion, and it is an act of terrorism that involves sabotage. Even though those who participate in this hate parade are civilians, there is always a heavy military presence that accompanies them. It was reported that in 2022 some three thousand officers were deployed in Jerusalem for the purpose of this march. That represents nearly the entire Jerusalem police force. Israeli police snatch a Palestinian flag from an elderly woman amid the Flags Day march in the Old City, May 29, 2022. Mahmoud Illean | AP

Not to be mistaken with traffic police, or cops on a beat looking for criminals, the police force that is deployed in East Jerusalem is of a different kind. This is a militarized police force and the officers are referred to as “fighters,” not officers. They look like soldiers, the arms that they carry are like those of soldiers, but their mandate is to attack Palestinian civilians, something they do with cruelty and brutality.

Zionists always blame Palestinians who respond to Israeli acts of war with acts of armed resistance against civilians. They call it terrorism. There is no question that it is terrible when civilians are killed and injured. The problem is that throughout the entire war Israel has waged against Palestinians it has been targeting civilians. There is no Palestinian military – there never was such a thing – and Israel has consistently, and with planning, targeted and killed Palestinian civilians going as far back as one can remember.

Perhaps it is time to step back and instead of viewing each act of violence perpetrated by Israel separately, instead view them all together as individual acts of a larger war – a war waged against a nation that has never possessed an army.

Feature photo | Members of Jewish youth movements dance and wave Israeli flags on the eve of the Dance of the Flags in the Old City of Jerusalem, May 28, 2022. Tsafrir Abayov | AP

Israel Says It Lost Track Of Drone That Penetrated Its Airspace, Dodged Its Interceptors & Fighter Jets 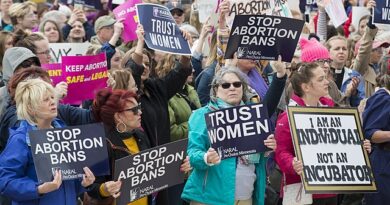 Abortuaries in Arkansas, West Virginia, Wisconsin And Alabama Announce All Scheduled Abortions Have Been Canceled