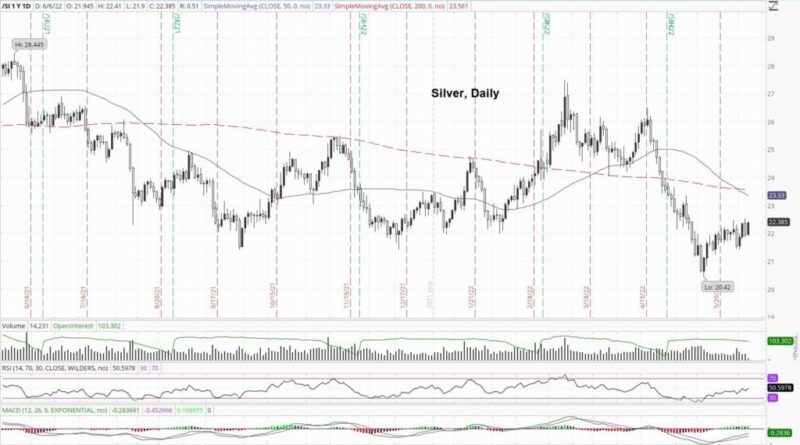 The Chart Huggers will not be able to use their favorite scapegoat, either…

(by Half Dollar) The official inflation report for the month of May, 2022, will be released this Friday at 8:30 a.m. EST.

Here’s the question: Does anyone else enjoy paying $85 for a mediocre appetizer, a bowl of flavored warm water with two ultra-thin slices of mushroom floating on top, and some crappy sushi at the trendy Asian bistro, only to have the waitress get cranky and mad when you don’t order “dinner” with it all?

That’s not the question.

Here’s the question: Is anybody at the Bureau of Lying Sadists Labor Statistics actually going to hedonically reverse-adjust the Food Away From Home category, in part, due to the fact that sushi in 2022 is not just way more expensive but of lesser quality and less actual ingredients?

Inflation statistics are beyond broken, as is the silver market:

Although it is kind of funny seeing the Chart Huggers totally ignoring the near record time, two-month pivot from Golden Cross to Death Cross on silver’s daily chart.

It’s also kind of funny seeing nearly everybody and their brother talking about other kinds of pivots, including the so-called “Fed Pivot”.

Speaking of the Fed, the June, 2022, 2-day FOMC meeting is next week, so we will not have to endure any Fed Heads yapping in public this week, as pre-game radio silence is ritualistic, but that just means “Market” “Participants” will be entertained with double the amount of armchair quarterbacking.

I think I’ll go shovel compost or something.

Back to the main point: After two months of Jobs Report do-overs, this is surely going to be “The Most Important Inflation Report, Ever”.

And amid this backdrop, a local Chinese restaurant would like to make a Public Service Announcement:

It should be noted that The Oriental Appetizer & Soup Wars have begun.

Regardless, food is getting more expensive.

How potato milk measures up against other plant-based milk alternatives