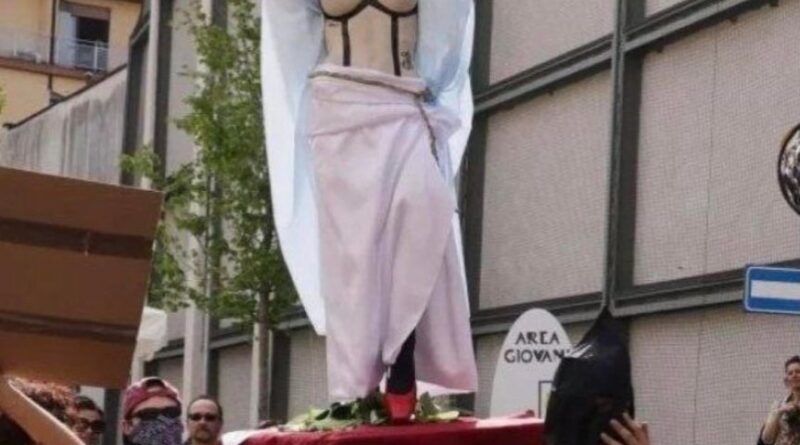 Donation in support of Leo’s work through Fundly: https://fundly.com/leo-lyon-zagami-channel  or https://www.gofundme.com/f/the-leo-zagami-show-lesule

The Catholic Church still considers sexual activity between members of the same sex to be a mortal sin against chastity, but since Pope Francis’s moderating tone has shifted the landscape in the last few years, in which homosexuality is imagined and judged. It seems there is a growing ambiguity from the Catholic Church regarding this subject, especially after a huge controversy erupted over the presence at the first Gay Pride, which took place last weekend in the Lombard city of Cremona, in Northern Italy, that featured a life-size doll disguised as a Madonna, a representation of the Holy Mary, with bare breasts, wearing what looks like a sadomasochistic collar and bondage wear.

The blasphemous representation that shocked most Catholics immediately circulated on social media, bringing heavy criticism against the mayor of Cremona, Gianluca Galimberti, who originally granted public patronage to this clearly Satanic event, disrespectful of a religion that is still practiced (at least formally) by most Italians.

“It is not like this, with this squalid and disrespectful way of the Christian faith, that the [LGBTQ] rights are claimed,” said, outraged most exponents from the various local conservative political forces, that range from the typical Northern movement of the Lega Nord (English: Northern League), to Berlusconi’s Forza Italia (usually translated to “Forward Italy” or “Let’s Go Italy”), to the right-wing Fratelli d’Italia (English: Brothers of Italy).  But of course, there was no criticism towards this Satanic stunt from any of the left-wing parties, including Beppe Grillo’s Five Star Movement now an appendix of Italy’s Democratic Party.

However, public criticism of the blasphemous image of the “Virgin Mary” that was carried on a canopy with her breasts out during the Gay Pride parade, was also moved by important local business figures of what is considered one of Italy’s wealthiest cities.

Giovanni Arvedi for example, a known steel entrepreneur, who is the patron of the local soccer team Cremonese, who built, among other things, the Violin Museum said:

“These symbols have nothing to do with the legitimate protection of rights and the fight against homophony and discrimination. They are out-of-tune images. because they offend others’ sensitivity.”

Arvedi also expressed “amazement and regret” at the fact that no authority has intervened implying he was shocked the local Diocese of Cremona had not said anything. The Diocese of Cremona is a suffragan diocese in the ecclesiastical province of the Metropolitan Archdiocese of Milan that has always been in the hands of the most progressive side of the Catholic Church.

Erotically alive, feminist and lesbian versions of the Holy Mary have been increasing in the LGBTQ events in the last few years, and are a common theme in the art of Alma Lopez, a controversial Chicana artist and activist born in Mexico and raised in California that has promoted in recent years an art piece called “Our Lady,” a digital print showing the Virgin of Guadalupe in a bikini made of roses, exalted by a bare-breasted butterfly. Lopez says she intended it as a tribute to Our Lady, “inspired by the experiences of many Chicanas and their complex relationship to La Virgen de Guadalupe.”

However, many people do not like her heretical representations, which usually end up triggering violent protests in front of the art galleries that carry them and have brought a big number of death threats toward the artist.

While most Catholics have no problem today in accepting Lesbian, Gay, Bisexual, Transgender, and Queer (LGBTQ) Pride Month currently celebrated each year in the month of June to honor the 1969 Stonewall Uprising in Manhattan, the same people have a problem with a senseless attack on their Faith like parading a blasphemous image of the Holy Mary.

We wonder at times why doesn’t the LGBTQ community mock Mohammed instead at their Gay Pride events? Too scared? Of course, you are, so please stop mocking Mary, the mother of Jesus, before the wrath of God brings you some nasty surprises.

Nigeria Is Planning A False Flag In Switzerland: Notes From The Edge Of The Narrative Matrix 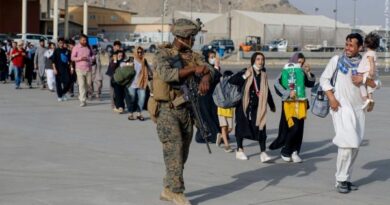