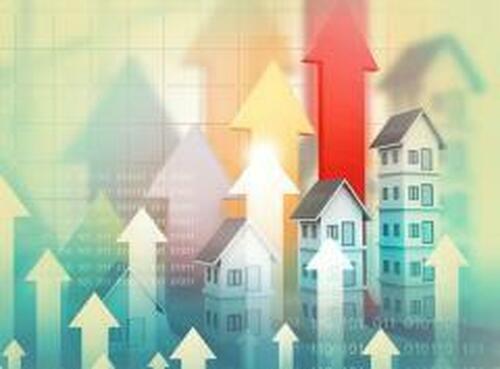 Authored by Ryan McMaken via The Mises Institute,

There is scattered evidence that home prices are finally starting to slow down. But, if the phenomenon is system-wide, we’re still waiting to see the evidence in numbers. Last week, the most recent Case-Shiller national data, for example, showed that home prices in March rose an eye-popping 20 percent, year over year. That’s well in excess of what we saw during the height of the housing bubble leading up to the 2008 financial crisis.

That makes nine months in a row that year-over-year growth has been above eighteen percent. Asset price inflation in residential real estate has been compounding at more than 5 percent per year for most years of the past decade, and price growth accelerated to historic highs over the past two years. Yet, remarkably, there’s still no evidence of any real movement in the homeownership rate, even among younger cohorts.

Basically, month after month of soaring home prices hasn’t done much to the proportion of households that are becoming homeowners.

There are a few reasons for this. One issue is too much aggregation.

So what would really impact the homeownership rate? We’d need to see a lot more than just rising prices. We’d need to significant period of rising interest rates. This would make debt more expensive and truly cut off more households from home buying. We’d also probably need to see some real job losses. For now, the growing gap between home prices and real wages is being papered over by rising debt levels. That can’t go on forever, but the employment situation—a lagging economic indicator—has yet to take a bite out of affordability.

In a longer historical context, homeownership in today’s age of rampant asset price inflation continues to be well above what homeownership rates were common before the Second World War.

Although many Americans perhaps assume home ownership was very widespread in the “good old days” when the family farm was common, this is not accurate. By the late nineteenth century, industrialization and urbanization had already encouraged both the formation of new households and the need for rental housing. A great many Americans in that period depended on boarding houses and residential hotels for lodging.

Census data shows that in the late nineteenth century and early twentieth century, the homeownership rate came in under 50 percent. It was only after the war that homeownership rates finally reached above 60 percent, and stayed there.

What Would It Take to Make the Homeownership Rate Really Fall?

So, even with demographic trends and historic growth in home prices working against homeownership, we still see that we’re not seeing homeownership rates fall to levels outside the “norm” for the past 5 or 6 decades.

Why do we see so little movement?

But with mortgage rates now rising from 3 percent to above 5 percent in recent months, will this be enough to really start pushing people away from buying homes? It’s still much too early to know the impact. Even with Americans looking at sky-high home prices, Americans may still be able to take on more mortgage debt at higher rates by shifting costs to consumer debt. We are seeing, after all, consumer borrowing heading upward at breakneck speed. The New York Fed also reports that overall household debt is heading up at rates not seen since before the Great Recession.

Source: Board of Governors of the Federal Reserve System.

This is being felt most in the younger age groups—the people most likely to be “priced out” of homes by rising prices. For example, in the NY Fed’s credit report, total debt balance increased by more than 12 percent for people in the 30–39 age group. That’s the highest growth rate since 2006. Growth for the 18–29 age group also is back at housing bubble levels.

In short, homebuying is being helped along by new larger layers of debt. This is unsustainable, however, if interest rates cease to remain near historic lows. Household budgets are already strained by CPI inflation in groceries and gasoline. Rising costs in debt service would overwhelm household budgets.

Interest rates are heading up, but aren’t exactly soaring upward to points where an immediate and large impact are obvious. The ten-year Treasury, for example, is still barely above 3 percent.

Finally, even if rising debt costs couple with rising prices finally drive first time homebuyers away from purchases in huge numbers, it will still take a while to see that in the aggregate numbers. After all, elderly homeowners are still a large part of the market, and it will take a lot more than rising mortgage rates to drive them out of homeownership. Rather, we’ll start to see the impact of declining affordability confined largely to the younger age groups. We have already seen this at work.

Here are homeownership rates indexed to the 1982 rate:

Finally, one big lesson from all this is that decades of subsidizing homeownership hasn’t actually moved the needle in about fifty years. After many years of both fiscal and monetary policy explicitly designed to drive up homeownership, many Americans—especially younger groups—are only finding it possible to buy a home by taking on more and more debt of all sorts.

This, however, should not surprise us. It’s the Fed’s low-interest/high-debt monetary policy in action. Skyrocketing asset prices are great for hedge fund managers and Wall Street types, but the policies increasingly drive ordinary people more and more into large amounts of debt. Central bankers appear confident that they can manage the situation, but given their track record in recent years, there is good reason for young families to suspect homeownership may soon be out of reach.

China “Undermining” Global Order While Enriching Itself – US Not Looking For “New Cold War”: Blinken