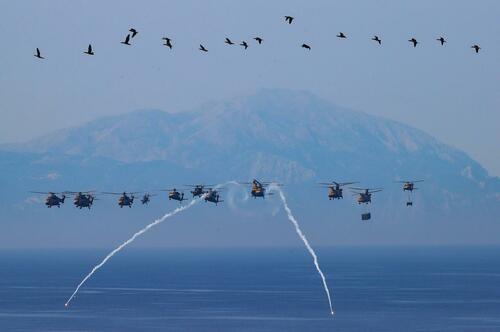 Turkish President Recep Tayyip Erdogan on Thursday accused Greece of militarizing its islands in the Aegean Sea with an eye toward threatening Turkey, in but the latest salvo in a series of tit-for-tat accusations between the two NATO members. Erdogan urged immediate demilitarization of the islands, stressing Turkey will never relinquish its “rights” in the Aegean Sea, statements which come weeks after he condemned Greek Prime Minister Kyriakos Mitsotakis for lobbying the White House to block impending US F-16 sales to Ankara.

The fresh words also came on the final day of Turkey’s multi-national “Efes-2022” military drill, centered on the coastal city of Izmir. “We invite Greece to stop arming the islands that have non-military status and to act in accordance with international agreements,” Erdogan said. “I’m not joking, I’m speaking seriously. This nation is determined.”

“I warn Greece to avoid dreams, acts and statements that will result in regret. Come to your senses,” he said in a televised speech related to the drills. “Turkey will not renounce its rights in the Aegean and will not back down from using rights that are established by international agreements when it comes to arming islands,” he added.

Erdogan further vowed that Turkey would continue its controversial hydrocarbons exploration of the region, which Greece, Cyprus, and some EU countries like France have condemned as violating Greek and Cypriot territorial waters. Erdogan claimed that Greece is violating the1923 Treaty of Lausanne and the 1947 Paris Treaty. He declared that Greece was previously given the islands on condition that they’d remain demilitarized.

“The agreements are there but Greece is violating them. It’s arming them. If Greece does not stop this violation, the sovereignty of the islands will be brought up for discussion,” he said. “It’s that clear. You will abide by the agreements.” In questioning the “sovereignty of the islands,” Erdogan appeared to suggest Turkish military intervention is on the table, also given he uttered the veiled threat on the occasion of major Turkish-led military exercises.

Greece responded by saying Turkey has long deliberately misinterpreted and misrepresented the content of the historic treaties, and further that Ankara’s standing threat of war justifies that Greece take steps to defend itself. As The Associated Press reports:

“It is clear to everyone that our country has upgraded its geostrategic and geopolitical footprint as well as its deterrent capacity to be able at any time to defend its national sovereignty and sovereign rights,” he said.

Erdogan also in the Thursday speech took the opportunity to address Western allies, telling them to stay out of the way of “legitimate” security operations – in reference to planned anti-Kurdish military action by Turkey in the south, on the other side of the Syrian border.

“We will never allow the establishment of terror corridors along our country’s borders, and we will definitely complete the missing parts of our security zone,” the Turkish leader said in reference to the outlawed Kurdistan Workers’ Party, or PKK, and its Syrian extension the YPG.

Erdogan continued: “We hope that none of our real allies and friends will oppose our legitimate security concerns.” However, Europe and the US have consistently stook against him on Syrian cross-border operations. Washington has repeatedly told Ankara that US forces backing Syrian Kurdish groups could come under threat in Turkish operations, warning against any new push inside Syrian territory. At the same time Turkey has held a steady line blocking Finland and Sweden’s ascension into NATO.

Oil Price Spike Has Yet To Spark Gasoline Demand Destruction 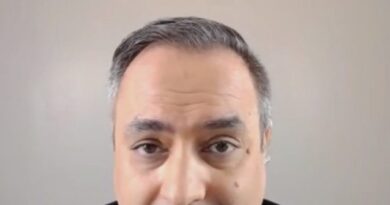 Newsweek’s Jamali: NYPD Should Spy on People at Out-of-State Gun Shows — ‘Be Proactive’